If you can remember who made the last "world's thinnest" smartphone, congratulations: you're a bigger newshound than I. Low-key manufacturer Alcatel is the latest to claim the title, however short-lived, with its One Touch Idol Ultra model. The 4.7-inch phone measures just 6.45 millimeters on its side. The company also introduced the more chunky One Touch Idol and the 5-inch quad-core One Touch Scribe HD. 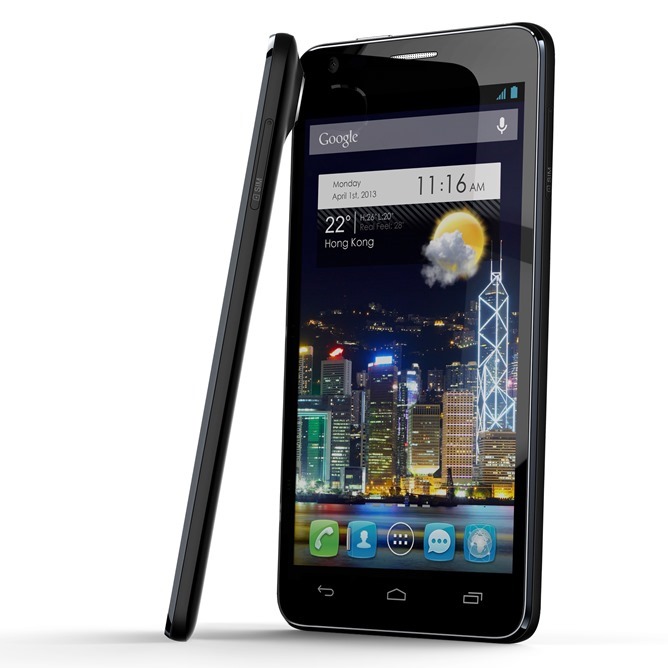 The Idol Ultra is pretty similar in features to other high-end Android phones, with an HD (presumably 720p) AMOLED screen, a 1.2Ghz dual-core processor of indiscriminate origin, 1GB of RAM, and an 8MP rear camera. On-board storage isn't mentioned, but there's no SD card slot. Alcatel mentions that the device is already running Jelly Bean 4.1... albeit in skinned form, judging by the rendered images. With a footprint of 134.4x68.5mm, it's roughly the same size as the Galaxy Nexus, minus the girth on the z-axis. Battery size (a serious consideration for this high-end space) is not addressed. 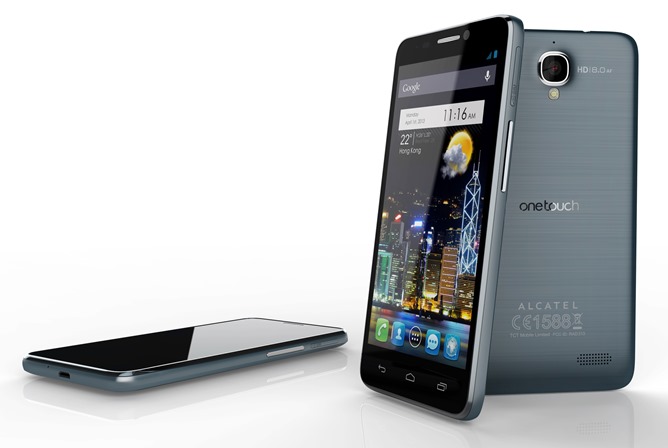 The more reserved member of the family is the One Touch Idol, which is only slightly thicker at 8.15mm. That extra junk in the trunk is accompanied by an 4.7-inch LCD screen with a lower resolution of 960x540, half the RAM, but a better front-facing camera rated at 2.1MP. The 8MP rear camera and 1.2Ghz processor remain. Its 110 gram weight (just 9 less than the Idol Ultra) is what Alcatel calls the "lightest smartphone in its category". 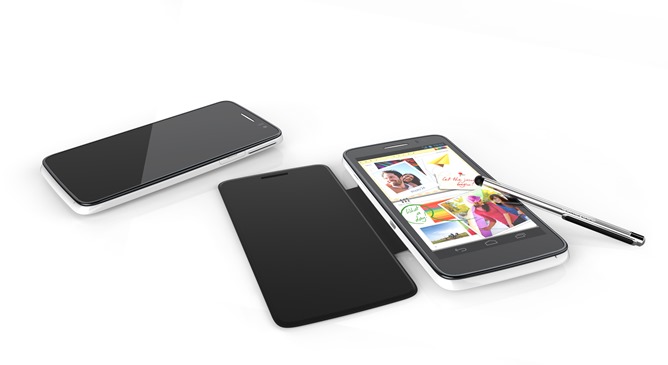 On the other end of the spectrum is the One Touch Scribe HD, obviously competing with the Galaxy Note family. The 5-inch HD LCD screen is paired with a non-stowable stylus, though whether it's active or not isn't mentioned in the press materials, and an optional cover. Notably, it's the first device announced with the MediaTek MT6589 quad-core processor. The Scribe HD gets a full gig of RAM, and unlike the other new models, its internal storage is expandable via MicroSD. For those interested, it measures 144x75x8.5mm.

Alcatel has set the release dates for all three phones for January in China, with the intention of releasing them to the U.S. some time after that. Only the One Touch Scribe HD has even a vague American release date for the second quarter. No mention was made of Europe or other territories. The One Touch Idol Ultra has a projected price of $444, the One Touch Scribe HD will be $397, and the lighter One Touch Idol has no price specified as of yet. None of the three HSPA phones have been attached to any carrier, U.S. or otherwise, but perhaps they'll catch someone's eye here at CES.

“The Alcatel ONE TOUCH brand has grown exponentially since entering the U.S. market eight years ago,” said Nicolas Zibell, President, Americas & Pacific for ALCATEL ONE TOUCH. “And with the launch of our new smartphone collection we plan to take things to the next level.”

The ONE TOUCH Idol Ultra smartphone is the thinnest smartphone yet. The device breaks current market records at 6.45mm thin. Performance is not compromised in this design with features such as a stunning 4.7’’ HD AMOLED display, a 1.2GHz dual-core processor, 8MP camera that captures 1080p video, and running on Android Jelly Bean.

In the same product line, the ONE TOUCH Idol also breaks current records, weighing in at 110 grams (3.88 oz) making it the lightest smartphone in its category. The device’s dual-core processor and Android platform provides a feature-rich experience and supports a large, bright 4.7” IPS display, 8MP camera and 2MP front camera, running on Android Jelly Bean and offered in premium brushed metallic finishes.

“The ONE TOUCH Idol device series represents a breakthrough in technology,” said Alain Lejeune, Head of Research and Development for ALCATEL ONE TOUCH. “We’ve pushed the barriers on design, resulting in devices that offer the perfect balance between ultra-slim form factor, large display, outstanding performance, and rich user experience, while keeping the devices affordably priced to consumers.”

A perfect blend of technology and design, these phones offer both form and function and are available in a wide collection of fresh and trendy colors. Additionally the company will be showcasing the exciting and colorful ONE TOUCH POP series of smartphones that redefine simplicity, as well as a series of thinner, sharper and faster tablets and new innovative connectivity devices.