The comings and going of ants are rarely fodder for a good strategy game, but when you think about it, they're tailor made. Ants have lots of natural enemies, a hive-mind social structure for you to command, and ants don't take crap from anyone (ever step on an anthill?). In Ant Raid, you take command of a group of anthropomorphized ants under attack from all sides. Snails, wasps, and all manner of other small-stature troublemakers are out to destroy the colony, and you're the only one that can stop them.

Ant Raid has a very simple concept at its core: keep the colony alive. In each stage your ants have taken up residence in some sort of structure – maybe a shoe, and maybe a watermelon. Whatever it is, you have to defend it. Other creepy-crawlies will start pouring in from the edges of the screen, and must be stopped before they can do damage to your base. 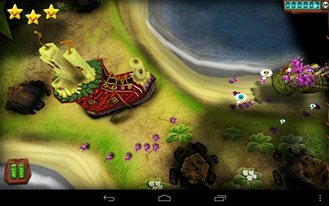 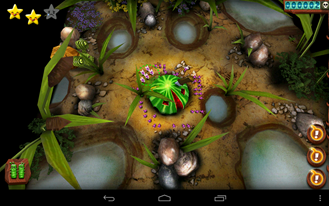 This title is basically a simplified real-time strategy. You don't have to choose unit types, manage resources, or build expansions. All you have to do is send your ant soldiers out to stop the attack. Most of the damage is going to be done by your ant units, but throughout the early game you will be granted additional offensive powers.

The twist is that when your ants head out to do battle some of them will be knocked out. You'll have to then send out more ants to retrieve your fallen comrades and haul them back to base. This adds a great element of planning to the game, making it much more engaging. Some stages also require you to retrieve flagpole segments to raise your flag and warn other ant colonies of attack. It's another thing to keep track of that makes the game that much more challenging.

Taking out the larger enemies will charge up the three special powers, and color matters here. Blue enemies juice up the blue meter, red the red, and green the green. When one of them is full, you can activate the power. The green ability let's you smash bugs with your finger, blue makes your ants invincible, and red makes them faster and stronger. These abilities can even be combined.

You select ants to send out for battle by tapping on any group on ants. This will highlight a small patch of ants, but you can hold longer to get a larger selection area. You can even pick all of your ants to take down the really big enemies that pop up from time to time. Once you have selected the number of ants you think will do it, just tap on the enemy you want to annihilate.

The levels aren't big in Ant Raid - just a little bigger than one screen width. You can drag anywhere on the screen to pan around, and you're going to have to do a lot of this to see where threats are coming in from. This works well, except for those times when it collides with the ant selection controls. Sometimes you might try to pan, but instead you're suddenly selecting groups of ants.

This control scheme is overall good, but when you miss tapping on an enemy you deselect the ants. The delay in wrangling up the ants again can be a serious issue. You have to be very, very careful when setting up attacks because this can be the difference between success and failure. Don't get me wrong, the controls are good, just not perfect.

You don't get up close while playing Ant Raid. The top-down view is set fairly far away so as to afford you a better view of the battlefield. There is no pinch-zooming, which I feel is a little odd. The visuals from way up there look great, though.

Ant Raid has cartoon-y graphics that look almost like a quirky Pixar movie. The ants scurry around without much discernable detail, but the larger snails, worms, and wasps attacking you look awesome. Big angry faces, fluttering wings, and colorful shells – it's all pretty cool. The textures are clean, but not very deep. It's really just a few steps away from cell-shaded. There is a touch of aliasing on the bugs, but the backgrounds are smooth and pristine. I genuinely like the visual style Ant Raid has.

There are film-strip style movies in between levels, but for whatever reason, you have to download an additional 82MB of game data to watch them. They're somewhat fun so you might as well get them, but I don't know why they aren't just bundled with the game.

Despite the intermittent issues I'm having with the controls, Ant Raid is fun and not frustrating even when the levels get crazy. The 90 story levels will take time to churn through, and even when you do, there is a never-ending survival mode. 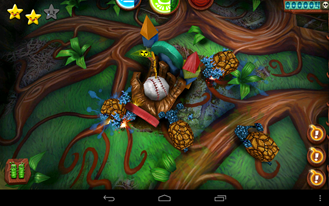 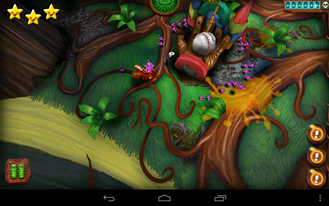 Ant Raid is on sale for $0.99 as of this writing, and that's a solid deal. It's definitely worth that amount of money, and there's no hard upsell on in-app purchases. You can buy bombs for a small fee that will clear the screen, but these are not one-time use items. Rather, it's like buying a new special power up. Take a look at this one before the sale ends. 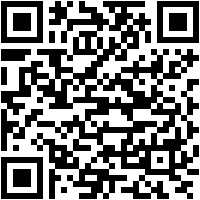