Titanium Backup, perhaps the most popular and powerful root backup solution available, got an update to version 5.8 today, an update that brought with it fixes, added support, and new features.

Probably the most significant new feature is the addition of web server backup uploading and downloading (for Pro users). If that sounded like a sentence written in Greek, we'll try to expound – what this means is that your device can now start a web server right from the Titanium Backup interface. You can then download and upload backups on your PC by accessing the server (in a method similar to AirDroid). The web interface, just like its mobile app counterpart, is exceedingly basic, but those who don't expect any frills will be pleasantly surprised by its functionality. 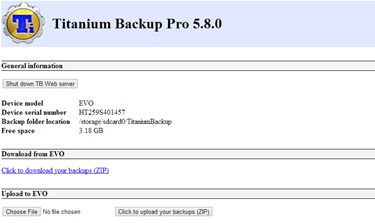 Besides that, the update brings support for bookmark folders and CWM backups for Pro users, and adds support for USB MTP connection for everyone else. Here's a full look at the change log:

Whether you're already a Titanium Backup user, or just someone with a rooted device who wants one of the most powerful root apps around, hit the widget and get Titanium Backup 5.8.