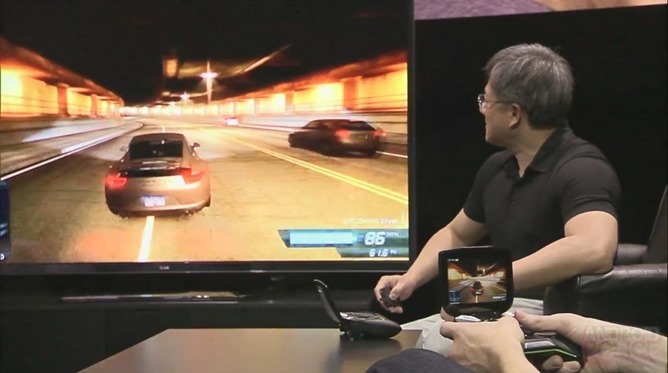 The interface allows for launching both individual games and Steam itself, in a solution that doesn't look like it was built around Steam specifically. After a bit of technical difficulty, video streaming to the Tegra 4-equipped Shield device looked practically instantaneous. High-quality graphics in games like Need For Speed: Most Wanted and Assassin's Creed 3 looked pretty much exactly like they do on a gaming PC, on both the fold-out screen and on the demo 4K television. In case you're wondering, it looks much, much better than OnLive and other current game streaming solutions like Spashtop's Gamepad THD.

Based on a few quick glances at the Windows 7 desktop, it looks like the streaming function can handle just about anything, though all the games were presented in an attractive "Grid" UI. Steam's Big Picture Mode should allow you to browse the store and social functions as well. The demo was running over Ethernet, but it should work just fine on WiFi, and there were hints that the VNC-type software could work over mobile connections.

Since details on Project Shield are achingly scarce at the moment, there's a lot that we don't know about the potential connection between Shield and gaming PCs. It's a safe bet that you'll need an NVIDIA-powered discrete graphics card to take advantage of it. We'll definitely be keeping an eye on these developments.