There are a couple of sizes that are natural points for a mobile device's size. The two big ones that jump to mind are:

Apple's been stuck on #1 forever now, but for me and my hand size, the Android world left that behind once all decent devices started shipping with 4.3" screens. I was upset for about a day with my 4.5" Sprint Samsung Galaxy S II Epic 4G Touch before deciding I liked the bigger screen more than I liked reaching the whole screen with my thumb.

With mainstream phones approaching 5 inches, #1 is a distant memory, so it just made sense to jump directly to #2, which is why I bought a Nexus 7 HSPA+ (outside the U.S. use this link instead) soon after it was available. 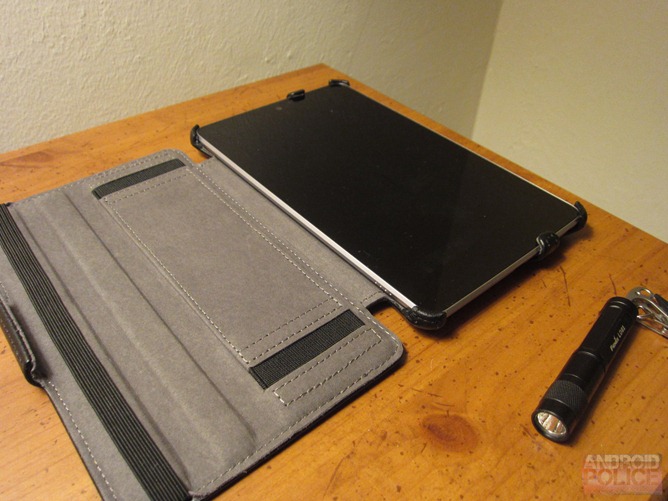 How the size has been working out

Overall, I'd say that I'm pleased with the size of the Nexus 7 as my only mobile device, but it's definitely not perfect from a size point of view.

What I love about it is this: How often when you're sitting around on the sofa would you use your phone to surf the web when you could also go get your laptop?

With my 4.5" last phone, the answer was never. In comparison, the Nexus 7 is a revelation. Though it's still not as good as I would have liked, I do find that I use it instead of my computer a lot of the time, and the problems in this area are mainly where it's held back by software, such as the way the web browser is still very slow and awkward compared to on a laptop, but the form factor itself is great.

On the downside, it's just slightly too large for my pockets. I wear slim but not skinny jeans, and it fits, but it just feels a bit bulky. If it had bezels the size of phone bezels, I think 7" would have been the size for me, but instead it has extra-wide tablet-sized bezels.

From an aesthetics point of view, you can see for yourself in the pictures I snapped. The tablet is actually in the pocket on my left. Just the corner of it pokes out of my pocket, though that's normally covered by my shirt. I've found most people don't notice that I'm carrying it until I pull it out, which is when I do tend to get a fair number of comments on it.

In fairness, I'd say the outlines of the tablet are more apparent in real life than they are in the picture, and are very visible through the fabric of my jeans. But then again, my jeans are slim enough that the outlines of any phone or even my really slim wallet I had in my right pocket in the picture are definitely visible through the fabric. Of course, now the outline is of a very large device, instead of a small one. I'm fine with the look, but some people definitely wouldn't be, especially depending on the type of pants they wear.

One last note on this is that before I got a smart case to control the screen, the screen was often being turned on somehow in my pocket, presumably by the tight fit pushing the power button, burning up the battery. 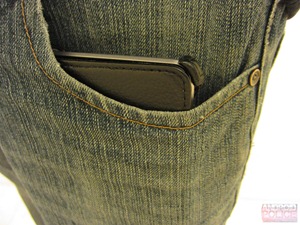 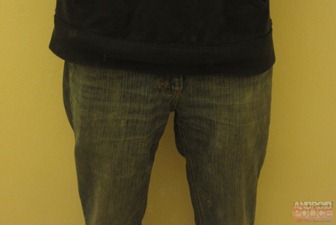 One downside of the Nexus 7 is that even though it has mobile data, it doesn't make voice calls.

However, like a lot of people these days, I spend very little time making phone calls compared to surfing the web and using apps. I switched to Google Voice years ago and my friends don't even know my real phone number. I'm pretty much a perfect candidate for this experiment.

Most phone calls that have to be made I just take care of when I'm at home using Google's free phone calling on Google Talk. It's a little like the pre-cell phone era when you didn't feel like you had to talk on the phone on the go, which I've always found a bit intrusive and annoying, only with the benefit of being able to text and chat on the go still.

My communications with my friends are pretty much entirely over text messages (free using Google Voice!), email, and Google Talk. As a result, this has actually been working out pretty excellently for me.

For when I really need to make a phone call in a pinch, like calling a store or restaurant, I've got GrooveIP, which lets me make free phone calls over my data connection. The quality isn't ideal, but it's workable. Unless you're comfortable holding a 7" tablet up to your face or using a speakerphone, though, a headset is probably a must.

On the plus side, my data-only connection of 1.5GB a month on T-Mobile prepaid is super cheap! Buying the refills at a discount, I usually pay a little more than $20 after tax a month.

Better yet, this plan is a data-device plan on T-Mobile, which means that I can also pop out the sim and stick it in my computer and use it there and be completely cool and legal still. I tethered before with my phone, but was always careful to limit my usage to avoid being detected. Now I can tether as much as I want, which is a nice perk!

How it's been working out as my sole mobile device

The screen is a thing of beauty. Mobile devices have been in a crazy resolution race for a while now, but at least for me and my 20/20 vision, what's actually been limiting how much of a website I can see at a time hasn't been the resolution, it's been the size of the screen.

Even with a resolution so high I can't see the pixels, it doesn't help when the text is still too small to read. It is pure luxurious bliss to be able to comfortably read at arm's length, like you would with a book, instead of having to holding my phone like a foot or so from my face like most smartphone users do.

The second biggest benefit is that the battery life feels like it's just unlimited. Seriously, switching from the phone scale of battery life to the tablet scale is paradigm-shifting. Not once when on the go do I have to feel like I should use my device less and save its battery. I just use it as much as I want, and then it's always got plenty more.

Another nice benefit I didn't really anticipate is that a lot of apps have really nice tablet versions that just work much better than their phone versions. I love on Reddit News being able to load one article on the right, while continuing to browse headlines and view images on the left. If only some enterprising developer out there would add the ability to load more than one article at a time, like with tabs, I don't think I'd ever want to use the website on my computer anymore.

One final point that's really nice about the Nexus 7 is that it's super cheap compared to a phone. Not only is the plan cheap like noted above, but buying one with unlocked contract-free GSM is even cheaper than a Nexus 4, at $299. That's the same that a lot of people pay for higher-end phones that come with 24 month contracts!

However, the Nexus 7 isn't all roses as a mobile device. A pretty major downside is that it has no vibration. Google was no doubt looking to shave every penny on the 7, and Apple managed to sell millions of iPads without vibration, so clearly tablets don't necessarily need vibration.

As a mobile device in your pocket, though, the lack of vibration does become a bit of a problem, and I find myself missing alerts at times due to being in loud surroundings. The only solution I can see is getting a Bluetooth watch or something along those lines, but the ones out there seem to get pretty bad reviews, and I don't really want to wear a watch again anyway.

The other major downside is the lack of a back-facing camera on the Nexus 7. On the go snapshots are pretty much impossible now, as are apps that rely on a back-facing camera like check deposit apps, and the loss of the flash that can be used as a light means I'm back to carrying a light on my keychain.

I've intentionally left out reviewing anything that isn't specific to the Nexus 7 as a phone replacement. There are plenty of reviews for the Nexus 7 already, and suffice to say it's very nice but not perfect.

Overall, I'm pretty happy with the using the Nexus 7 as my only mobile device experiment, and will probably stick with it for a while, at least until phone screen sizes start catching up. A phone with a bezel like a RAZR M but with a screen size in the 6.5" - 7" range would be perfect.

The only phone out there that I still think about is the Note 2, which is probably a compromise that would make sense for more people, but I didn't buy because of its exorbitant price tag (more than twice as much as my Nexus 7 HSPA+) and also since I'm really sick of dealing with Samsung and other non-Nexus issues like TouchWiz and worrying about burn-in on an AMOLED.