If you want to use Sprint's network without signing a contract, there are a lot of options out there, including its subsidiary Boost Mobile, the American MVNO Virgin, and hybrid provider Republic Wireless, among others. Sprint hopes that there are at least some prepaid customers left out there, because starting on January 25th, it will be offering its service in contract-free flavors.

Update: Sprint confirmed the new service to Fierce Wireless and provided some additional details. There will be no limits on data or bandwidth throttling, and LTE service will in fact be enabled on the Galaxy Victory. 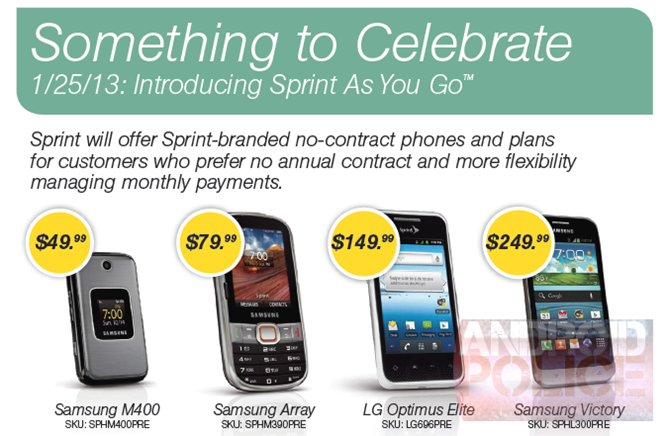 There are only two smartphones that will be available at the beginning of Sprint As You Go: LG's somewhat misnamed Optimus Elite, and the Samsung Victory, conspicuously absent of the "4G LTE" branding that's present on Sprint's current Galaxy model. The former will run you $150 with no subsidy, while the latter is $250; not terrible as far as prepaid phones go, but not exactly bargains, either. $70 a month gets you unlimited talk, text and web, though you're not allowed free roaming on EVDO networks for data. The exact position on roaming (remember roaming, kids?) isn't made clear, but it looks like using data on non-EVDO networks may eat into your pre-paid credit. Since this information comes from pre-release materials meant for Sprint employees and affiliates, we probably won't be able to go deeper until the end of the month. 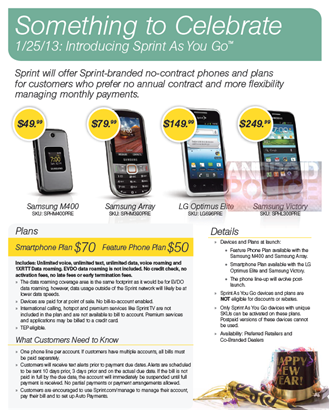 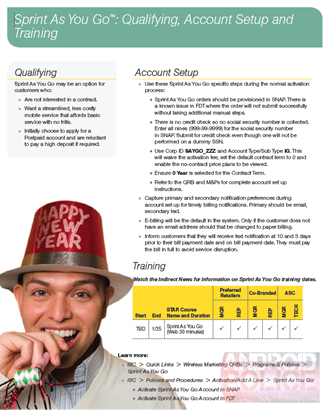 If you want even cheaper options, there are "feature phones" available with a $50 a month plan. Customers will be alerted to their dwindling service 10 days and three days prior to bills coming due, with no penalties for stoppage of service. More phones will be introduced in the future, possibly more from Sprint' main lineup. Standard Sprint phones, including Samsung's Galaxy S III and Note II, the LG Optimus G and the HTC EVO 4G LTE, cannot be used with Sprint As You Go.

The question that springs to my mind is, why would any well-informed consumer pick Sprint over Boost or Virgin for prepaid service? Assuming that the Samsung Victory will have its LTE radio disabled (and to be clear, that is just an assumption at this point), less expensive plans are available from both Boost and Virgin, with a wider variety of devices. Just for example, Virgin currently offers the LG Optimus Elite for $80 ($70 off the Sprint As You Go price) with unlimited talk, text, and 3G data for $55 a month. Want something a little snazzier? The HTC EVO V 4G (basically a skinned version of the older EVO 3D) is $150, with the negligible bonus of WiMAX. Over at Boost, the LG Venice, Samsung Galaxy Rush and ZTE Warp Sequent run $220, $149, and $200 respectively, and all of them run Android 4.0, something that neither of Sprint's prepaid phones can boast. If running an 18-month-old version of Android is, indeed, a boast. Boost has unlimited everything for $55 as well, but like Virgin, they knock you down to 2G speeds after 2.5GB of data. And if you really want to be really thrifty and/or futuristic, Republic's $19 unlimited hybrid 3G/WiFi service is just $250 bucks away, though admittedly limited to the lackluster Motorola DEFY XT.

In short, the only real reason to look to Sprint for pay as you go service is if you want to avoid the 2.5GB "soft limits" on Boost or Virgin, or you don't want to deal with Republic's somewhat newfangled way of providing service. If Sprint wants to attract customers to this service, they'll need some better options - like, say, the ability to buy any current phone outright and use it with a pay-as-you-go plan.