Don't say we don't love you, United Kingdom readers. Those of you rocking an HTC One X on the O2 network should check your settings menu, if you haven't gotten the update already. HTC representatives have taken to Twitter to announce the arrival of Android 4.1 to the former flagship handheld, and users on the company forums have confirmed the upgrade to software version 3.14.206.27. It looks like a nationwide rollout this morning afternoon, so warm up that wireless connection if you want some Sense-flavored Jelly Bean. 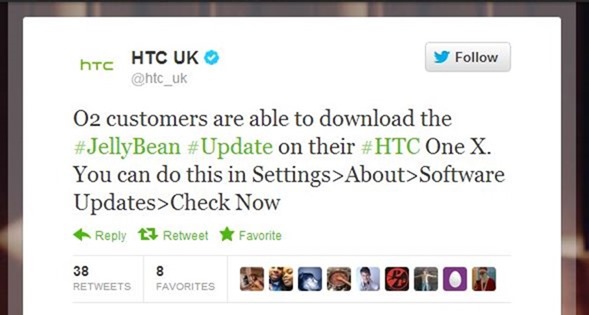 Unfortunately, neither HTC nor O2 have graced us with a changelog, so we've only got users' word for the changes at the moment. Adjustments seem to be in line with the international version: you'll be given a smaller update (1.29MB) before the full download. Changes to Sense include a new keyboard with emoticons, new themes, and panoramic photos for the camera app. A few users have reported difficulty with the Contacts app, which clear up after deleting the data and restoring them from a cloud backup. Enjoy!