You're crazy for this one, ARCHOS! Today, the company most known for releasing the best cheap Android tablets before the Nexus 7 swooped in and drove a wedge between the concepts of "cheap" and "inexpensive" announced the TV Connect. This thing is designed to plug into your set and essentially turn it into a giant Android tablet. With a remote control. No, it's not Google TV. What.

The TV Connect will come with a 1.5GHz "Multi Core" processor of indeterminate origin, 1GB RAM, 8GB of storage, and Android 4.1. It also comes with a built-in HD camera for video chat purposes (think Logitech/Skype's living room solutions). Most curiously—or is it necessarily?—it includes a behemoth of a remote control that includes a full QWERTY keyboard, control sticks, d-pad, gamepad and trigger buttons, Android navigation buttons, buttons buttons, buttons. BUTTONS. Also, somehow it can be used as a pointer for "tapping and/or swiping motion." It's unclear if you would do this by waving the controller around Wiimote style, or if you could use more Kinect-ish gestures to move around the UI. 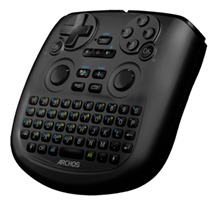 The company also touts "full multi-touch gesture support" which is completely baffling. With only a single picture of this controller to go on, it's a little difficult to tell if there is a touch pad on the underside, or if it would use some other kind of gesture to mimic things like pinch-to-zoom. The device would have to find a way, though, since it's a Google-licensed product and will come with full access to the Play Store. It would be pretty difficult without it.

The TV Connect will go on sale in February of this year for $129, but like everything in the industry, it will be available for demo at CES next week. As a pseudo-giant Android tablet goes, we'll have to see this thing for ourselves before we pass judgment, but hey, if it makes it easier to access Play Store content on your TV for cheap, it's at least doing something right. It might even fare better than Google TV has. We'll see, though.

Polaroid Announces A New 7" Tablet For Kids That You Should Not, Under Any Circumstance, Even ...