Stop me if you've heard this one before: An Android-powered <game console / TV / toaster> that's  <buzz-phrase> and will <more buzz, with gratuitous usage of 'revolutionize'> and change <your life / entertainment / socks> FOREVER.

I have my own personal skepticism around Kickstarter projects to begin with, so bear with the cynical jabs. GameStick is an Android gaming console on a USB stick, and it just reached its $100,000 Kickstarter funding goal. Go ahead and listen to the pitch video. In fact, I'll transcribe the first part for you, because it's just so... nauseating.

So we were really frustrated by the TV gaming space. It was really clunky - big consoles, big controllers, wires everywhere, and the ecosystems were completely closed. So we wanted to blow that apart with a really beautiful product; something really simple, really elegant, on a completely open operating environment. We call it GameStick.

So, you're frustrated by the TV gaming space? That's interesting, because last I checked, the TV gaming space was prettily happily humming along (if slowly shrinking) as a multi-billion dollar business with three very competitive players, one of whom just released a new console that's probably the most innovative thing to happen to consoles in a decade. The other two have new consoles coming out this / next year.

Granted, it's very hard to break in to this space because of the massive overhead involved in producing a console, and getting worthwhile publishers on board. That's probably frustrating. But does that actually mean there is something wrong with the industry? That's pretty big leap to make in my mind, and it's exactly why I'm highly skeptical of GameStick, Ouya, and anything else claiming to be the next "disruptive force" in this arena.

GameStick's next assertion is the one that really boggles my mind, though - that traditional consoles are 'clunky.' Because they're big, and so are their controllers. And they use wires. GOD, NO - NOT WIRES! If you believe that the average person's real problem with video game consoles stems from the fact that they're the size of a few 13" laptops stacked together and use cords to connect to a television, I can't say I'm particularly confident you really understand what it is consumers want in a home gaming system.

The ability to take a console wherever you go would be nice, sure, and not dealing with various video/audio I/O tangles would also be a big plus. Fewer wires is obviously where consoles will go in the future anyway, though. It makes sense. It may also take a while, because the necessary standards have not yet been established. But saying a USB stick with Bluetooth is the answer to that conundrum is like saying a bicycle is the answer to emissions from big rigs. It doesn't make sense. I'm not saying the GameStick is trying to completely replace the full-sized console - and neither are they - but their product's premise asks consumers to make some major sacrifices to gain benefits that, frankly, can never outweigh the costs. It's not like consoles are big and use wires simply because the industry is lazy, guys. There are - surprise of surprises - technical considerations involved in that sort of decision. 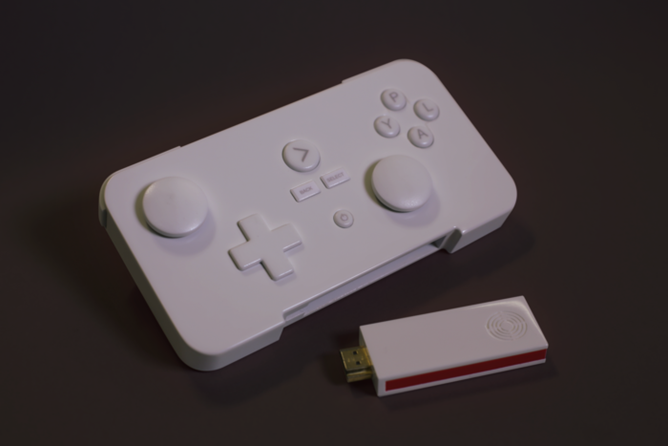 And big controllers? Really? That's an issue? News to me.

The next bit is about making a "beautiful ... simple ... elegant" product. Whoa, for a second there I thought Jony Ive took the mic. Thankfully, Jasper has hair, so the confusion was short-lived.

Finally, the standard "open <ecosystem / environment / platform>" comment, because it runs Android. Because Android's the only free OS out there with compatible content worth a damn, and choosing anything but Android would be monumentally stupid. And because open's always better no matter what, right? There's not word one about the Play Store or Google services, though, so don't count on any of that - hooray for proprietary app stores, because they're so open.

There's little here to separate the GameStick from the growing pile of Android on-a-sticks on the market. It runs an Amlogic dual-core A9 processor with a Mali 400MP GPU (a pretty good GPU, to be sure), Android Jelly Bean with some sort of proprietary overlay, and uses a Bluetooth gamepad that looks pretty unexciting.

And when it does end up in consumers' hands, it may very well please some people, at least for the low, low price of $80 if you buy during the Kickstarter. But the fact of the matter is that mobile hardware is advancing at such a rapid pace that it will quickly be lapped by quicker chips, more demanding games, and whatever the next big and exciting Android-powered Kickstarter super-thing is. It will in all likelihood end up a forgotten product, and I'll be surprised if the fickle tech media gives it a second wave of coverage when it ships (I doubt we will). Ouya has stolen the limelight of the "Android game console" niche for the foreseeable future, and I'd say its chances of succeeding are still slim at best.

So, why has the GameStick generated $116,000 of backing at the time of this writing? Well, because people like the concept of a stick that runs Android and plays games, I guess. And make no mistake, that's what you're paying for on Kickstarter: a concept.

But even that amount isn't actually very much in the grand scheme - they've only actually had orders pledged for around 1250 GameSticks at the time of this writing, nowhere near the quantity needed to actually be viable in the marketplace (or make it worth developers' while to bring more titles), let alone disrupt it. Even ten times that many orders would still just be scratching on the surface of relevance.

Sorry GameStick, a nice video and a 3D printer may get you off the ground, but when you strip away the pitch, your product's a tiny Android computer on a USB stick bundled with a Bluetooth gamepad - two things that are already well-represented out there. I struggle to see even an evolution of TV gaming here, let alone a revolution.