We've looked at a wide variety of accessories over the past couple of years: cases, cradles, headphones, speakers, etc., but I'm not quite sure we've ever seen a product like Une Bobine. In a nutshell, it's a microUSB cable. But it's not your average USB cable - it's an adjustable, bendable, flexible USB cable that can be used to hold your phone – a dock and cable in one, if you will. 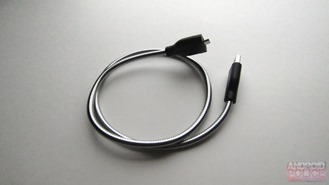 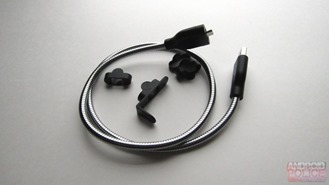 Now, the first question you may be asking yourself is: why would I want this? To answer that honestly, I really have no idea. I've had this thing for several weeks now, and I really can't find a good use for it. It's cumbersome, awkward, and pretty unstable. In short, it's beyond clear that this is another case of "let's take a product that we designed from the ground up for iPhone and make it work for Android!" You and I both know that never ends well. Prior to the 5, the iPhone had a very wide, large, locking connector that could easily stabilize the phone on the Une Bobine. MicroUSB, though? It's tiny and narrow - and it just doesn't work well for the intended purpose of the Une Bobine - despite the array of "adapters" included with the cable. 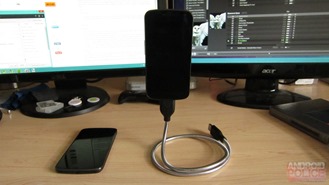 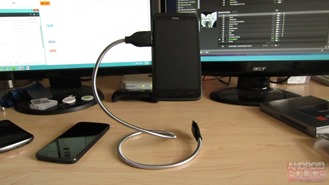 As I stated in the intro, this thing is probably pretty solid when used with an older iPhone (pre 5), due to the massive connector. With microUSB, though, I just don't trust it. It's anything but stable, as all of my phones just wobble around on it regardless of the adapter, which makes me too nervous to use it on a regular basis.

Don't get me wrong - your mileage may vary. But at $30 a pop, I not only find it impossible to recommend the Une Bobine, but can't even suggest to give a try for yourself.

We'd like to thank BiteMyApple.co for providing the Une Bobine review unit.