It was only a matter of time after the dev units shipped out that we could expect to see a thorough walkthrough on the part of a new owner, and here it is. Some of what we're seeing in this trio of videos, we've already seen in the official Ouya unboxing. However, a few new details have been highlighted. For starters, in the top center of the controllers, there are touchpads that can be used for cursor control. Also, as we learned before, they will require two AA batteries. Well, that's a bummer.

Of course, what we all really want to see is the interface.

As we saw in the screenshot before, the menu looks a lot like Windows Phone. What we could not see, however, is that the UI is also thoroughly incomplete. On one of the very first screens we see a Gingerbread-style dialog box, but later we see the WiFi menu in full-blown Jelly Bean garb. This leads us to believe that this isn't finalized at all, which should be good news to those who are hoping for a bit more than a Microsoft knock-off. 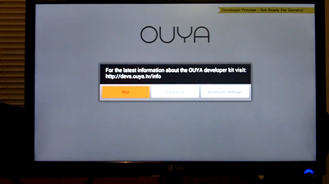 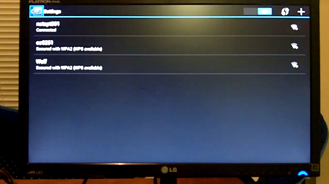 That's not the only thing that isn't final. As was mentioned in the previous unboxing video by the company itself, the dev console is made of plastic, but the final consumer version will not be so. There are also going to be some adjustments made to the controllers, particularly in the area of the trigger buttons which, in this walkthrough, seem loud and clunky.

For those of you who were wondering why the dev consoles cost so much, well, as we said, it's because this is a first-run product. It's likely that a lot of the molds and materials that were used for these only went to the 1,200 or so that have all shipped out by now and were never meant for mass production. Since the company can't recoup the costs in volume, it must do so in price. This is pretty typical for development kits.

The upside to this is that there are a full three months between now and the launch of the console, so game developers have plenty of time to get their ducks in a row. And then, once they're done playing with their waterfowl, they can build games.

If anything, we can probably take this either as further confirmation that there is not much to learn from this dev kit that is reflective of consumer units, or that the company may just be missing the mark. If I were a betting man, I'd place money on the former. While most attempts at enhancing Android gaming haven't exactly been a huge hit, Ouya at least seems intent on providing a decent experience, and they have the funds to do it. Mixing Gingerbread, Jelly Bean, and aped Microsoft interfaces just seems like a huge oversight.

What do you think, though? Hopeful or skeptical?