We've lamented the various restrictions on NFL Mobile's streaming audio and video before: the fact that it costs extra even for games on public broadcast, the fact that you can't use it with HDMI output, and most of all, the fact that it's only available on Verizon. Today the app gets a little less restrictive, at least assuming that you use Verizon FiOS for your home Internet connection. The latest update indicates that FiOS subscribers will be able to access NFL Mobile live streaming on their tablets for free. I guess they figured that they've got enough of your money. 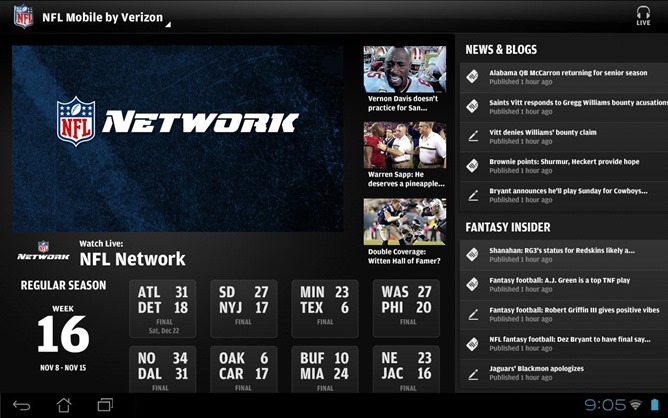 The update text reads as follows: "Now Verizon FiOS customers can enjoy Live video on Android Tablets." We don't have a connection to test, but we suppose that means that WiFi tablets are fair game for streaming, so long as you have a FiOS account. Whether or not the streaming video itself is restricted to your home network isn't specified; while it would be nice if you could get NFL games from your tablet anywhere, it wouldn't be the first time that such restrictions have been placed on live TV. If any of our readers are FiOS customers with an inquiring nature and have a tablet handy, drop us a line in the comments section or via [email protected] with your results.

The update text mentions some bugfixes, but also indicates that tablet streaming will be coming to other internet service providers. That probably includes Comcast's Xfinity broadband, which has a business relationship with Verizon Wireless outside of the FiOS subscriber area.