As we close out 2012 and move into the new year, all of the tech world is eagerly awaiting the arrival of one, unique product with bated breath and eager curiosity: Google Glass. But for those of us who don't have $1500 to shell out on prototypes of that thing (and a time machine to travel back to I/O '12 to order them), we're distracting ourselves with Ouya, the Android-based gaming console. As of right now, the company behind the platform has finished shipping 1,200 developer units out.

As a teaser for the rest of us, the company has also released the above unboxing video. There's not too much to see here if you've been following along, but it's at least interesting to get a glimpse into what the retail version could resemble. Ouya is very specific in its blog post to state that everything you see is what the device might be like. The clear plastic on these units are specifically for the devs, there are no games, and the UI may be different by the time consumer models ship in March. So when you start to see the inevitable screenshots and walkthroughs, maintain a bit of healthy skepticism. Oh, hey speaking of screenshots, here's one! 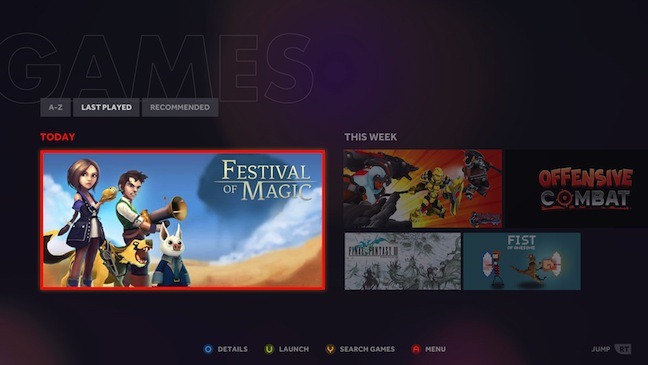 So, that's what the Xbox Ouya UI is gonna be! Okay, that's not entirely fair. This is only one screen grab, and it's specifically labeled as "what it might look like when Kickstarter backers get their consoles in March." So, this may not be final. Still, if this is how it will appear then the comparisons are inevitable. Though, if you're going to take inspiration from an interface, it may as well be one of the best-selling gaming products of recent memory.