Update 2: Llama has been returned to the Play Store this morning as promised, listed as version 1.2012.12.29.1412. As for the pesky silent mode/vibrate bug? This version's changelog indicates that it is "hopefully fixed."

Update: It looks like KebabApps has pulled Llama from the Play Store while the developer sorts out "a pain-in-the-butt problem involving silent mode," in which the app can – for some users – switch what should be silent mode to vibrate mode. KebabApps, in a blog post, provides more information on the issue, along with a (hopefully) fixed download, which users are encouraged to test, and which will be uploaded to the Play Store "tomorrow morning."

Llama, an extremely popular location-based profiling app, was issued an "über üpdate" today, bringing a handful of big changes from a new UI to bug fixes.

For starters, Llama is now officially compatible with Jelly Bean. With that change, the app got a "semi-Holo" UI which, while not stringently close to the Holo we all know an love, is a step in the right direction (though Llama, like Tasker, could still due with some UI TLC). The interface is based around four familiar tabs – Areas, Events, Profiles, and Recent, and remains pretty straight-forward. 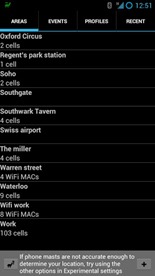 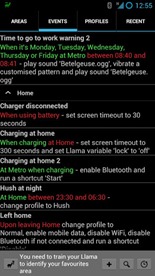 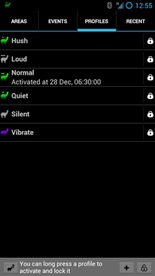 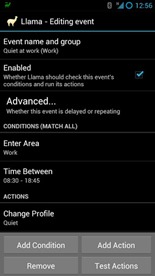 Llama's update also brings event sharing, meaning users who have created location-based events can share them with others after only a single long-press on the event.

Users will also enjoy LlamaTone rate limiting, event delays based on seconds (rather than minutes), and a handful of new actions and conditions. Here's a full look at the change log:

Whether you're already a fan of Llama or just want a great location-based method of automating your phone's settings, hit the widget below and grab version 1.2012.12.28.1222. 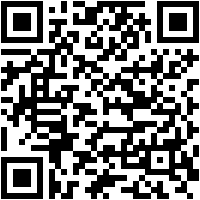