My fondest memories of the original Star Wars films were the starfighter dogfights. The first time you see the assault run on the Death Star, or the ill-fated attack on the second before it was finished, it's really cool to watch a bunch of fighter craft flying around, blowing the heck out of each other. Every once in a while, you can get the same sense of scale and calamity in a game - usually of the real-time strategy variety.

Eufloria is a game that manages to capture this sense of chaos, allowing you to zoom out to see the entire asteroid belt you're capable of conquering, or to zoom in completely to see each individual ship firing lasers at targets. All the while, you're given a very soothing soundtrack and very rewarding mechanics: it's a low-stress look at war.

Eufloria's title comes from a heavy plant-based motif. Your soldiers are labeled "seedlings," and spawn from a tree that's planted on an asteroid. There are also other types of trees, which provide home-grown defenses and spawn powerful laser pod flowers that can turn the tide of battle. Each asteroid you colonize comes with a different set of attributes for the seedlings it spawns, letting you tailor your army to meet different threats. For instance, speedy seedlings will blow past enemy defenses on the way to other asteroids, while strong ones are capable of taking enough punishment to destroy them.

It's essentially a big rock-paper-scissors game with a zerg rush element to it, and it makes for a real-time-strategy that's easy to pick up and play. It feels less stressful than say, Starcraft, or Age of Empires. It prizes patience, preparation, and seizure of opportunities.

At its core, Eufloria's strategy comes from a focus on the big picture rather than individual units. Since you can't choose what your seedlings are attacking once they've been sent to an enemy asteroid, it kind of minimizes the amount of thinking you have to do. Instead of saying "okay, I'm going to prioritize this tower, then this enemy," your attention is shifted to whether an enemy is going to take advantage of your absence at a base.

However, as you play more of Eufloria, you start to realize that a numbers game can be paramount to winning. There hasn't been a map that I've run into that can't be solved by simply working on your economy until you have a sufficient amount of troops to just bum-rush everything. This usually takes the form of a number of "seed worlds" on the fringes of my colonies that can't be attacked without going through literally everything else I have. 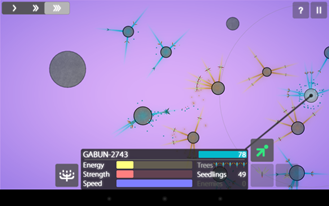 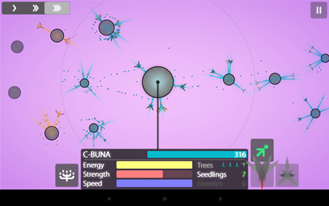 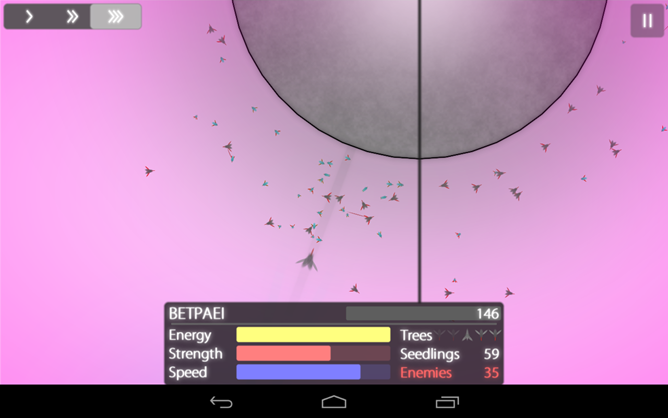 These planets just pump out new units, and because of the ability to set a waypoint closer to the war front, I can forget about them. Since there's little you can do to a planet after you've filled them up with plants, there's usually less to worry about; instead of checking on upgrade progress or queuing up new units like in a normal RTS, they're just there, producing new soldiers.

I suppose that's what contributes to Eufloria's lack of stress compared to other RTS games. Instead of having to constantly check on things and worry about minute mistakes spiraling out into a lost map, you can proceed with confidence knowing that with proper positioning, there are "safe" setups that you can count on. The game also allows you to unlock all the stages without playing a single one, which is great for skipping tough challenges or when switching to a new device.

Of course, this is going to provoke some detractors who say that the simplistic nature hobbles the game. They'd be partly right, but Eufloria's purpose isn't to be a hardcore title where theorycrafting and build optimization will bring you victory. My experience with the game reminds me a lot of playing Warcraft II: Tides of Darkness on my parents' PC. I wasn't playing multiplayer, and I knew I could beat the computer - it may have thrown me some curveballs every once and a while, but there was still some satisfaction knowing that if I wasn't dumb, there was a good chance I'd win. 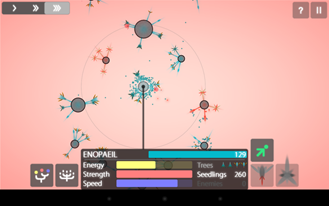 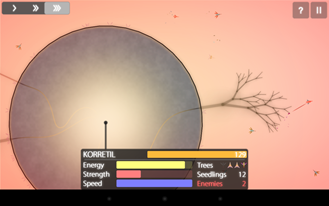 The overall experience of the game seems to ring a bit louder than comparing it to contemporaries. The touch screen environment allows for a greater sense of unit control, and the ability to zoom in and see what each fighter craft is doing is just plain awesome. The music and ease of use just make this an altogether great concept, and it's worth picking up.

However, for comparison's sake, I picked up the iOS version of this title and was severely disappointed when I noticed the superior optimization that version had. Everything just seemed a lot more smooth, avoiding the slowdown and performance hiccups when zooming in to a large amount of units. I suppose this is a consequence of having to develop for larger sets of hardware, one that will hopefully be ironed out in the future.

All in all, I can say that Eufloria is definitely worth your cash, and if you want a game that's going to suck you into a great strategy experience for half-hour increments, you cannot lose here. If you're a fan of the genre or are just looking for something a little bit more inviting, try out Eufloria; you won't be disappointed. Android 4.1 Jelly Bean Update For HTC One S Rolling Out Throughout Europe

Don Bluth Insists On Making Your Life Weirder By Releasing The Laserdisc Classic 'Space Ace' On ...