Artem gives me all the weird stuff. I love it, really. In the last week or so alone, I've covered Shaq fighting mutant zombies, Santa Claus as a rock star, sentient pudding, and a walk in the park. I thought I couldn't be happier. Then he brings me 'Sacred Guns'. This game stars Archangel Mark Leung (which appears to be the same name of one of the primary devs on this project), wielding his dual golden pistols and rainbow sword against an army of "God's unwanted creation." Apparently, when the Lord Almighty wanted to flood the Earth to cleanse it of sin, "sin" was code for "evil Teletubbies." Which makes perfect sense.

Oh, and as if that wasn't enough, the reason this afro-having, nerd-glasses-wearing angel hipster is killing off all these bizarre creatures? They're trying to sneak aboard Noah's Ark. Noah, by the way, is a pirate. Again, this makes perfect sense. Because of reasons. The relationship between Pirate Noah and Afro Angel begins to sour, though, when the latter attempts to save a mermaid from the flood.

I've been waiting my entire career to write a sentence that awesome. 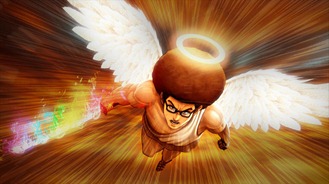 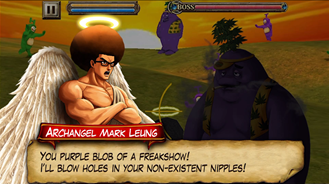 How much would you expect to pay for a game like this? $5? $10? A lifetime of penance and servitude unto the Most High? Your expectations are lofty, but no. This game goes for a single dollar on the Play Store. And the Lord did grin. You will find Sacred Guns coming in glory, judgment, and badassery via the widget below.