Developers, repeat after me: invisible keyboards never work. Do you understand? Good. I hope we're clear on this. Because after trying to use the ridiculous "invisible" SnapKeys Si, which blocks more on-screen crap than any other input software I've ever seen, I'm ready to throw my beloved Nexus 7 through the next wall to look at me funny.

Here's the basic idea behind how SnapKeys Si works: Instead of being given a full QWERTY keyboard, you get a selection of twelve letters, divided among four colored blocks. If you want to type one of these letters, you just hit its block. If you want to type a letter that's not on one of the squares, you just tap anywhere in between the boxes. Sounds simple enough, right?

You know nothing! Until you've beheld this digital specter of death with your own mortal eyes, speak nothing of "simplicity" to me! 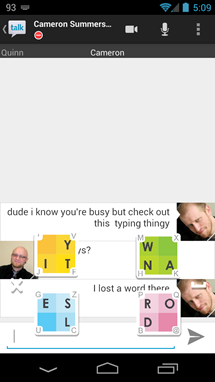 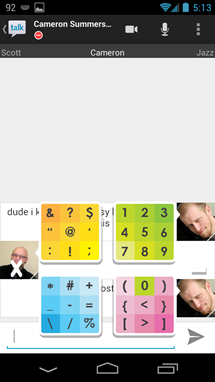 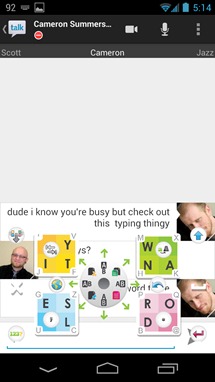 Left: Regular keyboard layout, Middle: Numbers and symbols, Right: Composite screenshot of all three hidden menus (not all are visible at once). All: Your nightmares for the week

For starters, let's deal with the simple typing problems this keyboard presents: While most input methods will autocorrect based on what keys you may have accidentally hit, this one takes roughly half the alphabet and throws it into a big ol' bucket and says it will just guess which letter you meant to type. Which fits nicely with the theme of guessing where to put your fingers to begin with.

You know what, though? It's okay. We'll keep an open mind. After all, this is Android. We allow for things that have a steep learning curve if it makes things more efficient, right? Sure, it might take some time to memorize the location of letters on this keyboard, but if it makes things faster, we're all for it.

Out of six autocorrect options, this thing did not guess that I was trying to type the word "me!"

But, okay. Alright. You still have manual input options! Kinda! Sure, yes. Let's go with that. In the event that autocorrect fails you, it's still possible to backspace your way to the beginning and try again, manually typing each individual letter you know, for maximum efficiency. So, as long as I still have that option, why am I so obviously frustrated with this 'invisible keyboard? I'll give you a hint... 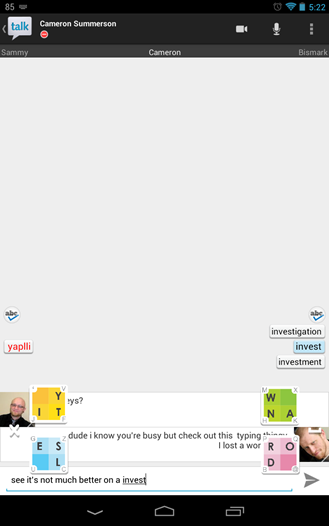 IT'S NOT FREAKING INVISIBLE.

Seriously. By this definition of "invisible," do you know what would happen to every mischievous, young sci-fi protagonist who discovers a magical cloak and then sneaks into the ladies locker room? HE'D GET FRIGGIN' MACED IN THE EYEHOLES.

If there's a way to turn this thing invisible, I haven't found it. I checked every one of those weird, hover-menu options. I opened up the app in the drawer. I long-pressed everything I could get my furious little fingers on. Couldn't find it. If their idea of invisible is that it doesn't take up half your screen like most real keyboards do, well, sure. Look at all that extra real estate! And how completely wasted it is because this thing floats over the only part of this chat window I care about.

In SnapKeys' defense, some boxes input text at the top, so this would be safely out of the way on the bottom of the screan and leave me plenty of room, but I don't have use for a keyboard that is only better half the time and a magnificent pain in the ass the other half.

Oh, and here's the kicker: even if you could make the keyboard invisible, it won't do you much good until you've memorized which keys to press and where all the hidden menu options are. It would be more difficult to use this if it actually did what it says on the box.

This is a bad idea. Worse than a bad idea, it's entirely unnecessary. Is it mildly annoying that keyboards take up a huge amount of space on mobile devices? Yes. Absolutely. Is it ridiculous that in landscape mode, sometimes the keyboard takes up the entire display? Of course! Has any replacement ever worked where step one is "Okay, now relearn the things you've been taught since elementary school?" Not usually.

It may be inefficient, but the fact is that over the last five years, devices that use digital QWERTY keyboards sell like hot cakes. It already works. The layout is fine. Every innovation that's been successful has nothing to do with changing where to put letters.

SnapKeys Si is currently in a semi-private beta. You need to sign up here, but as soon as you complete registration, you'll be able to download it. And you know what, in the interest of open-mindedness, I absolutely encourage you to try it. Don't let me tell you what works best for you. I will not, however, be held responsible for any property damage as a result of your unbridled rage after using this thing.

NEW YORK--(BUSINESS WIRE)--SnapKeys (www.snapkeys.com), the developer of a unique innovative typing interface for mobile devices, today announced the beta launch of SnapKeys Si, the first ever invisible keyboard app to free smartphones and tablets of obstructive, on-screen keyboards. SnapKeys Si brings social interaction to a new level, by opening the screen by way of only four translucent keys so users can see and interact with mobile content, something that was not possible until now. Additionally, SnapKeys Si offers simplicity, speed, accuracy, and comfort to the overall mobile user experience. Mobile users with Android devices can view online video demos and download the free application atwww.snapkeys.com.

“Despite innovations in smartphone and tablet technology, mobile devices today are still reliant on QWERTY-based keyboard designs, which were originally intended for typewriters and computers as a separate peripheral from the screen. The screen space of small mobile devices is precious and cannot be occupied by many keys.”

As the result of extensive research and development and a rich portfolio of filed patents in data entry and human computer interaction, SnapKeys Si powers lively, interactive, and social experiences on touchscreen devices like smartphones and tablets without a full-sized onscreen keyboard blocking visual content and requiring excessive finger movements. This configuration of only four invisible keys and minimal letters, results in a comfortable keyboard that is so intuitive users do not even need to see it on their screen. Without a full keyboard taking up the most of the screen, users have the opportunity to interact and comment on visual content more effectively, specifically in applications like Facebook™, Email, Search, Instagram™, and YouTube™.

“SnapKeys Si brings a long overdue upgrade to the mobile device market, where the screens of mobile devices have been limited to a QWERTY keyboard and a small text box,” said Benjamin Ghassabian, CEO and founder of SnapKeys. “Despite innovations in smartphone and tablet technology, mobile devices today are still reliant on QWERTY-based keyboard designs, which were originally intended for typewriters and computers as a separate peripheral from the screen. The screen space of small mobile devices is precious and cannot be occupied by many keys.”

With only 4 keys, a few frequently used letters and a unique word prediction technology, SnapKeys Si is easy to pick up - in a matter of a few minutes. Users can type very fast with high accuracy in comfort.

[New App] Twist Tells Your Friends How Late You Are Running

[New App] Small Call Is A Floating Call Notification That Lets You Pick Up, Hang Up, Or Text Back