ÜberConference, simply put, is a service that makes conference calls better. It adds not only a visual element to the call, but an extra dimension of functionality, allowing users to record, mute, have private conversations with, and even research call participants, all while keeping track of various in-call statistics. After taking a look at the service, it isn't hard to see why it won TechCrunch Disrupt NYC in 2012.

Until now, the service was limited to desktop users. With today's introduction of an Android client to the Play Store, however, mobile users can start sophisticated, productive conference calls in seconds and enjoy everything Über has to offer. Speaking of offerings, Über's Android client carries the same visual language of its computer-bound counterpart to the small screen with simple, intuitive controls, and features like call recording, statistics, and participant management intact.

Two of Über's most impressive features are Earmuffs and social integration. Earmuffs, true to its name, is a feature that allows hosts to put virtual earmuffs over certain participants, allowing them to speak privately to a team or group while others are left out of the loop. The service's social integration allows users to research any participant by checking out their social profiles on Facebook, Twitter, LinkedIn, and Google+. 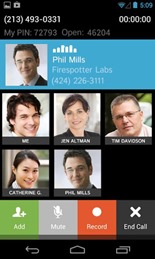 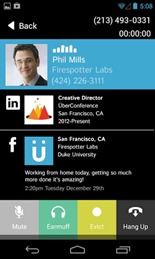 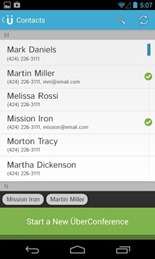 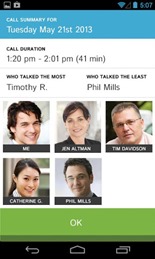 If you've been looking for an awesome conference call client with functions you never knew you needed, ÜberConference may be your solution. Head to the Play Store listing through the widget below, and check out the ÜberConference website for rates. It is worth noting that Über isn't available internationally just yet, but TechCrunch indicates that expanded availability is in the cards.

Before you start creating conferences, though, check out Firespotter's slightly less serious promo for the new mobile app: You Better Watch Out: Dead Trigger Gets A Christmas-Themed Update, With New Boss, Arena, And Weapon