Of course sharing this tidbit is going to make me that guy*, but if the word "meme" to you means "a picture with text written on it" then chances are you owe at least some thanks to the Cheezburger Network. This site (and later, series of sites)has been built around the business of collecting viral internet images for the lulz. Now, several realms from this digital domain—including but not limited to Memebase, FAILblog, and ROFLRazzi and a couple dozen others—are available via the new Cheezburger mobile app. 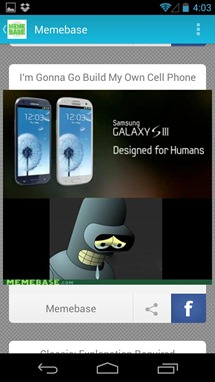 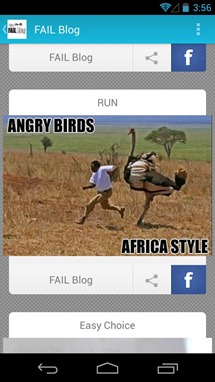 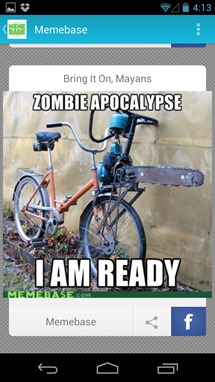 The app features just about every sub-section to the Cheezburger network (including one of my favorites, So Much Pun). It's pretty zippy, and the feeds are easy on the eyes. Of course, there are also plenty of sharing features for you to pass the pics on to your friends. Which, of course, you will. You say you won't. You say that this is commoditized humor and that most of the images lack originality and you don't stoop to lowest common denominator laughs, but at the end of the day, you'll all find something here you want to show to another person.

* Yes, it still quietly irks me that 'meme' has lost the much more significant and useful meaning of 'repeated internet joke.' I've given up the fight, though. 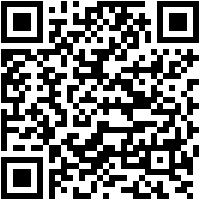 Everything Everywhere Offers The First LTE Tablet In The UK: Samsung's Galaxy Note 10.1