Update: Sprint's posted the official changelog, here it is:

- Software version is: 3.15.651.16
- Updates may be released in stages. When checking for the update, you may receive a message that no update is available, check back later or wait until the update notification is sent to your device.
- Refer to the HTC EVO 4G LTE Software Updates blog for install instructions

We're hearing from a tipster that the EVO 4G LTE Jelly Bean update is rolling out today, confirming the Sprint leak we reported on yesterday suggesting as much (the build number matches, as well). Here's a screenshot of the update dialogue: 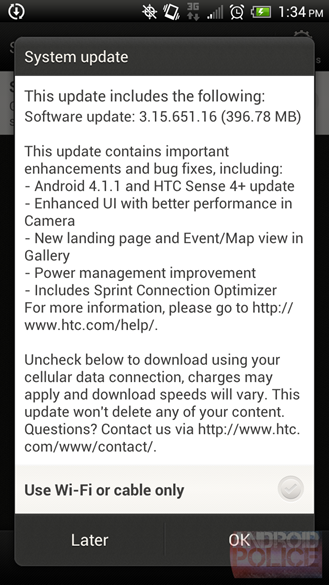 Doesn't get much more confirmed than that. The update of course brings Android 4.1 Jelly Bean, which adds features like Google Now and expandable notifications. The latest version of HTC's Sense UI overlay, Sense 4+, is also in tow, though it's a pretty minor bump. There's a mention of improved power management, too, and that's always a welcome change.

We're still waiting on an official changelog from Sprint, though it's likely that will just be a mirror image of what's shown here. Start frantically hitting that 'Check for updates' button!

Verizon's Pantech Breakout Getting Update To S8995VWCA55F.BB With A Long List Of Tweaks