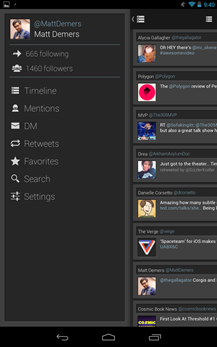 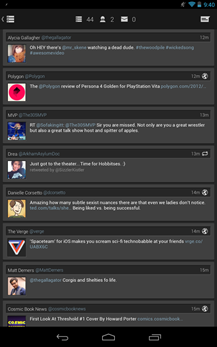 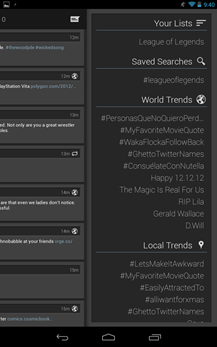 Falcon Pro had roots as Falcon, a Twitter widget that was fully-functional and looked damned good, to boot. However, fans were restless for a full client release, so the development team released Falcon Pro, first as a beta and now as a complete package.

I had a chance to use the beta, and was fairly impressed at what I saw. I haven't come across the Twitter app for Android as far as functionality goes, and while Falcon Pro doesn't quite tick off every single box on my list, I believe it's the closest. It does this through having a rich feature set without that getting in the way of its main function: to let you use Twitter.

While that might seem like a bit of a no-brainer, other apps may forgo simple functionality in favour of fanciness; animations may be clunky, or the app might be slow while downloading new messages. There also may be a lack of notifications or instant updates, or the list management is poor - basic things that should be functional in every client might get shoved to the side in favor of snappy transitions, extra themes, or widgets.

When you first boot up the app, you'll be pressed to sign in with Twitter, and you'll be taken to your default timeline. You can update this with the customary pull-down-to-refresh, and you can jump to the top of each heading by pressing the unread count. This paints a very simple picture of a Twitter app, but there are some things to point out. 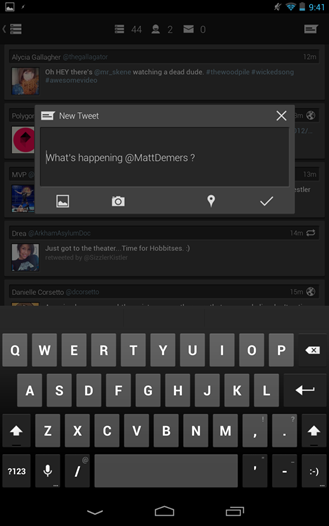 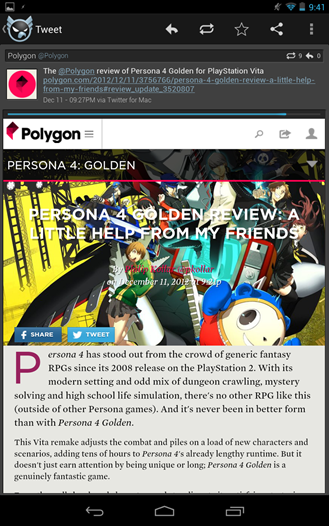 The transition animations for the pull-down and loading were very smooth on my Nexus 7, and this stands as a small litmus test of the overall quality of the app. If something meant to serve you quick, efficient updates can't do so without major visual hiccups, that's not a good sign - I have a very modest 600 people I follow, which allowed for a decent flow of new posts without any major problems.

Clicking on posts will isolate them on their own screen, which will allow you to use an in-app browser to view any links or pictures. They also do generous previews of YouTube videos or images in your timeline, so there's a bit of visual flair that just looks good. Long-pressing  on a tweet allows you to perform actions like replying or re-tweeting quickly, which I'm a fan of.

Advanced users will also enjoy how a lot of functionality is hidden behind menus that can be accessed with a left or right swipe. You'll be able to jump between different feeds quickly here, as well as view custom saved searches, lists and trending topics at a glance; those last few features make it great for marketing types who need that kind of quick look into what's hot. 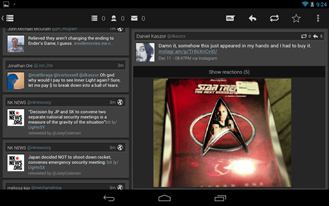 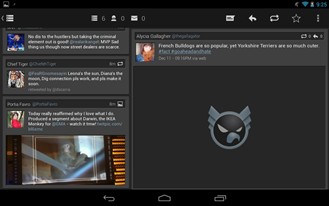 However, if there's a place that FalconPro is at fault, it's the ambiguity in some of the ways it handles itself. For instance, native Twitter re-tweets will only happen if the user hasn't modified any of the text; otherwise, it will show up as "RT @Username Blah blah blah." While there's a tutorial the first time that it shows up, it can be a bit annoying that there isn't a one-touch solution like with other apps.

It also doesn't offer multiple customizable columns, and separates different feeds in different screens. If you're looking for something that's similar to say, Hootsuite, which allows you to look at multiple different searches at once, you will not find it here.

FalconPro is available on the Google Play store for $0.99, and doesn't include the original widget functionality of Falcon. That's still available for free ($2.55 donation version too!), and remains a great alternative for light Twitter users.

However, if you're looking for something with a little more power, FalconPro is great for its price and will give you an equal balance of power and form factor. Even though it lacks in some areas, it feels like an evolution of a Twitter client, instead of just another copy. That makes it worth your time.