Looking to "rebalance the relationship" between humans and their smartphones, Moscow-based Yota Devices has announced the YotaPhone, a smartphone with an LCD display on one side, and an e-ink screen on the back.

The reason behind (between?) the dual screens, Yota says, is to deliver the information users want, right when they want it, without disengaging from the real world by pressing a power button and unlocking a screen. Users can choose to see information ranging from news stories to social media updates, calendar entries, and more. The information updates itself constantly, and is always ready to be looked at. Since the e-ink display uses very little battery power, the phone's 2100mAh pack should allow users to enjoy usage comparable to devices with a single display. 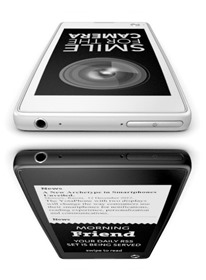 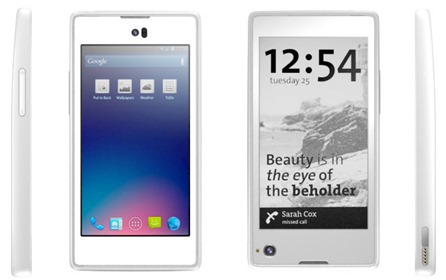 Dual displays aren't the only feature the YotaPhone has to tout, though. Here's a quick rundown of its other specs:

While the YotaPhone looks alright on paper, it's important to note that it will be the first smartphone produced by Yota Devices – a company that is actually a spin-off from modem/router manufacturer Yota. That being said, the phone has, evidently, been in the works for over two years already, and it does have a nice mix of alluring weirdness (did I mention the power button is also a SIM slot?) and some decent-sounding specs. 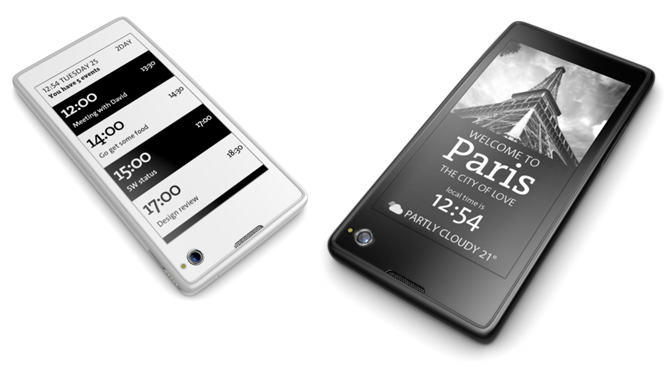 Will Yota Devices' "new archetype in smartphones" be a success? We'll have to wait and see – the phone isn't expected to become available until Q4 2013, at which point its Krait processor and JDI display panel may be wanting. Yota Devices is, however, planning to say a little more about the device at MWC 2013. For the full press release, just keep scrolling, or check out Yota's PDF presentation below.

The YotaPhone with two displays will change the way
people use their smartphones for notifications,
reading experience, personalization and communications

Moscow, Russia. 12 December 2012.  A new archetype in smartphones with two displays will help consumers enjoy life’s virtual side without missing the real one, explains the phone’s creator, Moscow-based Yota Devices.

YotaPhone is a powerful Android-based phone. It is the first time a smartphone integrates a full-color LCD on one side and an electronic paper display (EPD) on the other side. The two displays are linked together to open a new world of unlimited user experiences.

The EPD is the user’s personal space for receiving notifications, linking to social media, reading news as it happens or simply displaying favorite pictures. The LCD and EPD are both 4.3 inches.

“This will be the first time that people will be able to personalize the information they want to receive on their phones in an effortless way,” said Yota Devices CEO Vlad Martynov. “You tell YotaPhone what information you want and when you want it. It becomes your personal assistant reminding you of what’s important to you.”

“Today if you want to check your email, calendar or social media page, you have to pick up your phone, turn it on, open the application and only then can you receive the information. With YotaPhone, this information will appear on the electronic paper display effortlessly, continuously and updated in real time,” Martynov explained.

The two displays have different functions and different purposes. YotaPhone lets users watch videos, play games and perform other functions best suited on the LCD, but adds an electronic paper display for content that requires longer reading time, like reading a book or magazine. It also keeps important information visible without draining the battery. Boarding passes, maps, tickets and other important information are displayed even if the battery dies.

“Technology is setting the tone of our lives rather than the other way around. We at Yota Devices aim to rebalance the relationship with our smartphone. YotaPhone takes all the best components of this great lifestyle product and amplifies them. At the same time, we address some of the ways smartphones interfere with us being truly social beings. YotaPhone is always connected, but in a smarter, less stressful way,” said Martynov.

Yota Devices has been working on YotaPhone for more than two years. The first model was shown to then Russian President Dmitry Medvedev in September 2010 at a meeting on the country’s modernization program. Yota Devices has filed a number of patents, copyrights and design rights associated with YotaPhone.

YotaPhone uses the Qualcomm Snapdragon MSM 8960 platform, one of the most advanced processors integrated into a single chip, and the latest release of the Google Android operating system. The API developed by Yota Devices will allow the developer community to create innovative ways to use and benefit from the phone’s two displays. Yota Devices has created a number of applications for YotaPhone to allow users to take full advantage of the EPD.

“YotaPhone is elegant, slim and sleek. It’s as gorgeous outside as it is inside, featuring two Corning Gorilla Glass screens, which are exceptionally resistant to damage,” Martynov said. This is the first time Corning’s 3D Gorilla Glass is being used on a smartphone.

YotaPhone will be available for sale worldwide in the second half of 2013. It is a multi-band, LTE phone that will work anywhere in the world. Exciting new details about YotaPhone and its innovations will be unveiled at Mobile World Congress in Barcelona on 25-28 February 2013.