Prev
Posts in the last
24 Hours
sorted by
Hottest
Next
This contest is now over. You can find the winners in the Rafflecopter widget below.

It's the holiday season, and you know what that means: people are running around frantically trying to buy things. Among those things, you'll likely find a hefty supply of gadgets and gizmos, because this is the 21st Century, and everyone must have at least one techno-thingy. But there's a quandary when it comes to buying mobile devices: price. Everyone wants to get the best possible deal, and this is the time of year to get it.

But getting a good deal isn't all that matters when selecting a place to purchase mobile devices from - there's also customer service. For me, quality service ranks higher on the list of importance than lower price. I want to know that if I have an issue with a product, I can contact the company from which it was purchased and get things resolved quickly and painlessly.

And when it comes to excellent customer service, GSM Nation is second to none - just take a look at its 9.84/10 rating over at Reseller Ratings. Those are real ratings from real people, and the numbers don't lie.

Not familiar with GSM Nation? Here's a little intro: it's a class-leading retailer of unlocked handsets. They believe that you shouldn't have to get locked into a two-year agreement to get an affordable phone, so they're selling top-notch phones for rock-bottom prices. You don't have to take my word for it, though - just head over to the site and take a look for yourself.

My favorite thing about GSM Nation has to be their loyalty to customers. So much, in fact, they let the users pick which phones go on sale with a new feature called Choose Your Own Sale. Basically, there's a running poll every week with a list of devices that users can vote on. At the end of the week, once the poll closes, the winning device is knocked down to the sale price that was displayed during the poll. Then, another poll starts and the process happens all over again. This means that new devices are hitting their lowest prices every week, and you get to choose which ones make the cut. That's awesome. 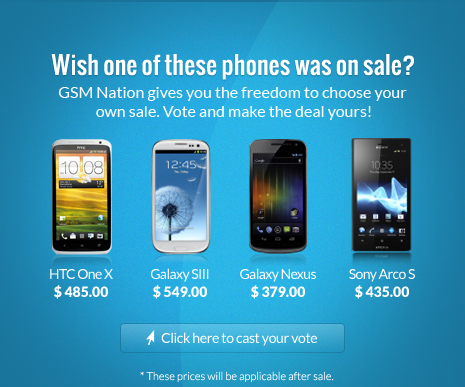 A look at this week's poll choices.

We already know that GSM Nation is doing awesome things in the area of customer service, but they've also provided us with two 16GB Nexus 7s to giveaway, which is just as cool in our book.

So, how do you enter? Follow the Rafflecopter widget, of course!

Update: Here are the winners, selected at random:

The giveaway begins immediately and will run until Monday, December 17 at 12:00 AM PST. After that, we'll randomly select the winners.