Twelve years ago, Sega released a game for its brand-spanking new Dreamcast system that was so stunningly original its influences can still be seen today. Jet Set Radio (Jet Grind Radio for US gamers) became an instant sleeper hit, and has earned its cult classic status. The impressive, stylish visuals, unique gameplay and awesome music are still remember fondly by my generation. Now that Android hardware has caught up to and in many ways surpassed the old beige box, Sega has re-released Jet Set Radio for the mobile world. You can pick it up on the Google Play Store for $4.99.

Those who have fond memories of the original will likely do what I did, and buy the Android version immediately. And those people will think it's five bones well spent. Other gamers, however, may want to put on the brakes. While Jet Set Radio retains the elements that made the original great, namely its unique gameplay, striking graphics, (now in HD!) and excellent music, the controls have suffered greatly in the translation to the touchscreen. While the original controls were always a little floaty, the touch buttons and camera make the game downright frustrating to play.

Grind The Night Away

If this is your first experience with the Jet Set franchise, it goes something like this. You're a skater punk in a shiny, cel-shaded version of Neo Tokyo who expresses himself or herself through two things: music and graffiti. Various gangs of grinding roller bladers run around the city marking their territory, while avoiding the efforts of the police, who apparently have no thieves or murderers to occupy their time. 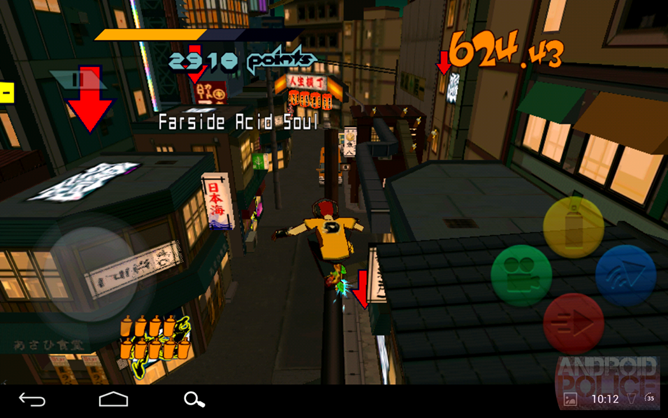 The game is much more of a standard action title than, say, a Tony Hawk-style skating sim. Controls are surprisingly simple: buttons for boost, jumps and camera reset are self-explanatory. For smaller tags, a single tap of the spray button will do, but larger and more complicated works will put you into "graffiti mode." Quick gesture controls approximate some street art, but leave you vulnerable. Paint and health are scattered around, and you'll need to find just about all of it to get through the levels.

After a quick tutorial, the game seems pretty simple: roll around the areas of Tokyo, participate in some illegal free-form art galleries, and dodge the cops. With stylish characters who automatically grind on just about any raised surface, it looks like a whole lot of fun. Until you get hit with the double-whammy of a ticking clock and limited amounts of paint (basically ammunition.) With a time limit, large areas to navigate, cops tackling and shooting you, and unfortunately poor controls, even experienced Jet Setters will have a hard time beating the clock.

The Colors, Duke! The Colors!

On the other hand, the graphics and audio are fantastic. The simple, stylish presentation of the original Jet Set Radio shines on Android, at least on my Nexus 7. The cel shading technique means that the game looks great even while pushing a relatively low amount of polygons, with appealing animation and effects. While the camera can get a little out of hand (giving gamers bad flashbacks of 90s-era 3D titles) it's not a dealbreaker. Environments shine, particularly the night levels. Of course, a 2000-era console game doesn't exactly beat the latest and greatest Android visuals, but they're still enjoyable, and look good even on my less powerful Galaxy Nexus. 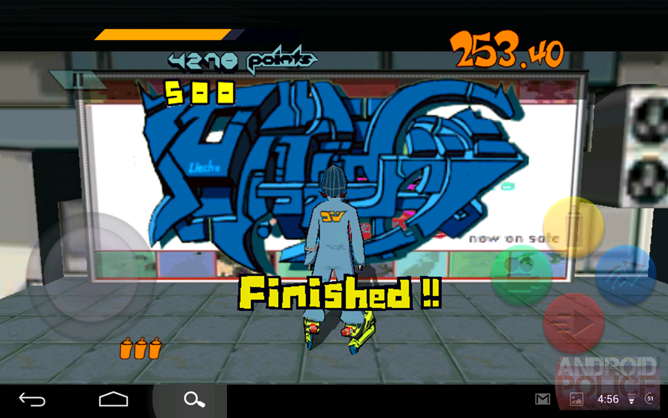 The graphics are only half the story of Jet Set Radio. The music is at least as important in cultivating that happy-go-punky atmosphere, and it's just as catchy and varied as it was twelve years ago. Players can unlock even more tracks via in-game pickups, and the menu system features a jukebox that can play back any track you want, including some of the equally great music from the sequel, Jet set Radio Future. Sound effects are pretty basic, but includes a little voice-over for the main characters and full mission briefings from your narrator and DJ, Professor K.

Other aspects of the game are pretty standard: you're given plenty of save slots, options for music and effect volume, et cetera. The design of the missions themselves are a little dated - instead of an open world, you're sent back to the gang's clubhouse in between missions, where you can select different characters and mix up your graffiti. Speaking of graffiti, you can import photos or create your own artwork - Galaxy Note users can go to town with this feature.

Unfortunately, there's one function of Jet Set Radio that brings it to a grinding halt. It's a pretty standard reviewer move to slam the controls of a mobile game, but it's entirely appropriate here. Your character is always on wheels, so hairpin turns or quick reverses are nearly impossible. Combine this with a time limit, stages with multiple levels accessible only by grinding, cops constantly on your tail, and navigation and exploration becomes a chore. 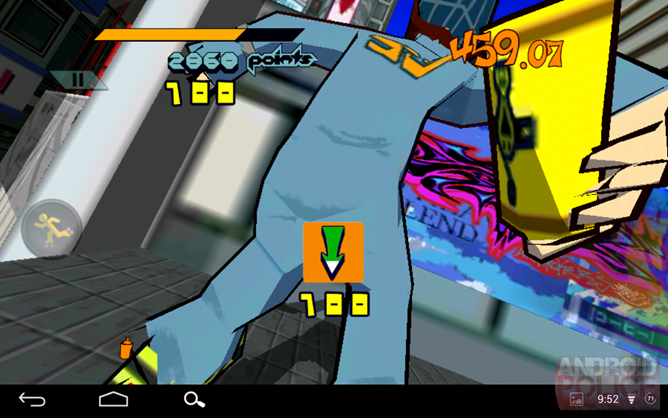 It's not like Sega's done something wrong here - the technical translation of Jet Set Radio is essentially perfect. And it's got to be said that the controls weren't that great on the original game. But making the buttons and thumbstick virtual amplifies the small problems of the console game into major grievances. It's still a solid game, but the control and navigation issues should give anyone but the most devoted fans reason for pause.

I wanted to love Jet Set Radio, and I do - just not on Android. While all the charm and innovation of the game is still present, the unfortunate reality of touchscreen controls has once again reared its ugly head. For those who are wondering, I wasn't able to get a Logitech controller to play nice with the game on a Transformer Prime. If you're looking for the nostalgia factor, and you happen to have a Windows PC, Xbox 360, PS Vita, or PlayStation 3, play it on a dedicated gaming machine. 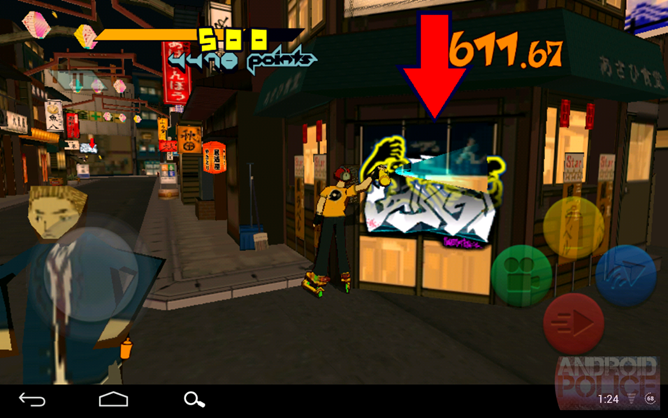 But if nostalgia alone is worth a Lincoln to you, Jet Set Radio is five dollars well spent. The combination of colorful graphics, undeniable style, great music and customizable graffiti are solid elements more than a decade after their debut. If you've never experienced Jet Set Radio and Android is your only option, there are worse ways to spend an afternoon than fighting with mobile controls. I bought it just to encourage Sega to bring more Dreamcast games to Android - hopefully with more thoughtful port work in the future.

[Weekend Poll And News Roundup] Do You Put Your Phone In A Case, Skin, Bumper, Or Go Bare?