Is rooting phones a hassle for you? Do you want to root somebody else's phone (whether they're willing or not), but don't want to deal with that whole pesky "getting permission" part? (Or dealing with teaching them how to go about doing it?)

A new app over at XDA by wchill may have you covered. I say "may" because it's still in a very early beta stage, but the response so far from the community has been pretty positive.

Root Transmission requires three things: 1.) a rooted Android device with USB hosting capability, 2.) a USB OTG cable, 3.) a one-click rooting script for the device you're trying to root. There's still a bit of DIY going on with that last part, but if you're reading this article, that's probably a pretty minor hurdle for you. Once you have the script, you dump it into the Root Transmission folder, connect the device you want to root, fire up the app, and press "Root!" You can also unroot. 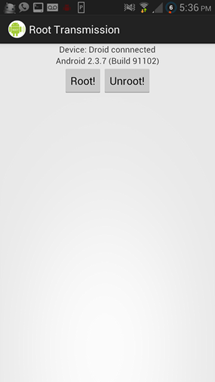 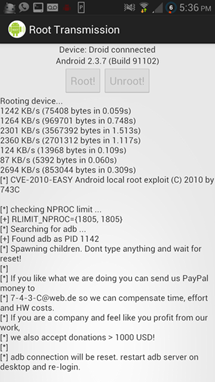 The app was up on the Play Store at one point, but was taken down for being "dangerous" - so we aren't expecting it to return. You can just download it from XDA instead, though. Head to the XDA thread to get it, along with two ready-made one-click root scripts for the Verizon Galaxy S III and ASUS Transformer tablets.