Today, Facebook made an announcement that's probably bigger than it seems at first glance. Now, if you want to use Facebook Messenger, you no longer need to have an account with the social networking giant. This, quite simply, is a really big deal that could easily go overlooked. The app can be used to message contacts via just their phone number, create group conversations, and share photos. Of course, you could do this with Messenger before, as SMS was an available option. The difference now, is that it's open to everyone. 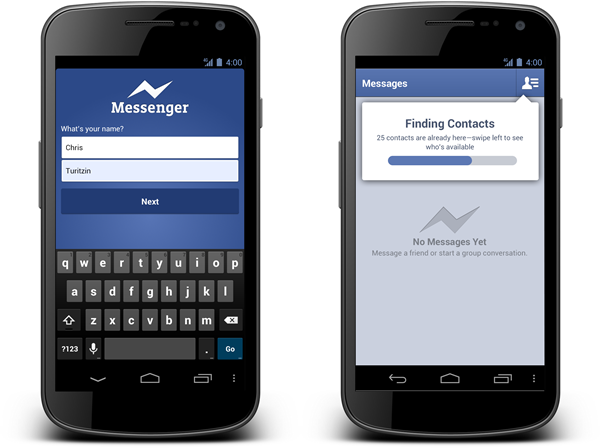 What this means is Messenger can now be counted among basic SMS-replacement apps like WhatsApp and Handcent. However, unlike a lot of those other apps, this is fairly clean, from a well-known software developer and it can be expanded. WhatsApp, for example, is locked in to itself. However, if you use Facebook and your friend doesn't, you both can still use the same app to communicate.

Since the SMS app in Android is one of those system apps that manufacturers like to reskin, texting is an entirely inconsistent experience on the platform, and the OS is just crying out for a constant in the chaos. Ever since Google Talk integrated G+ contacts, it's been a really great IM medium that you don't necessarily need to convince everyone you know to install, but the lack of picture sharing really cripples it as a texting replacement. This might just be Facebook's chance to corner that market before Google gets its messaging ducks in a row.

Third Time's The Charm? Nexus 4 Set To Go On Sale In The UK And Germany At 5PM Local Time