The Nexus 4 release has been a mess since the beginning. All across the globe, people tried to get their order in on launch day, and, well, they couldn't. Most who tried were left waiting until Google put them back on sale. That time has already come and gone for the U.S., where the second-coming of Google's newest flagship went about as smoothly as the first (read: not very). Even when sales first went live, the device had a "ships in 1-2 weeks" status, which got longer and longer as the day went on. Now the 8GB version is completely sold out, and the 16GB variant ships in 5-6 weeks. That's a while to wait. 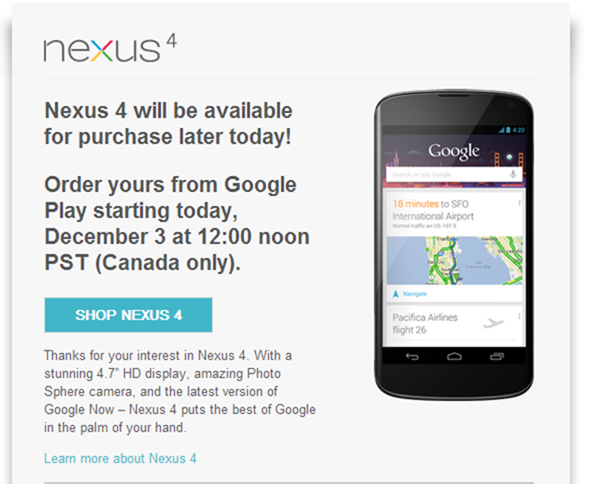 But now it's your turn, Canada. It's time to get behind that keyboard, make ready the F5 button for rapid-tapping, and get yourself a Nexus 4. Maybe.

Or maybe it's time to try to get yourself a Nexus 4, only to end up left wanting. I hope that's not the case, but give Big Gs track record thus far, it's probably best to assume the worst.

Either way, Godspeed to our friends in the north. May you get a Nexus 4 with fervor and haste on this day.

[Thanks Mitchell, Justin, and Jeff!]

Do The Twist: Pixel Twist Review