OK, stay with me here - APIs are important. Case in point, ever notice how whenever one of your favorite apps uses a built-in Google Maps viewer, you suddenly want to open up the real Maps app? (Read: because the web maps viewer is old and ugly and terrible.) Today, that's all about to start changing. With Google Play Services 2.0[.10], Google's introduced a brand-new vector-based embeddable Google Maps view. That means that instead of sending you to a crappy WebKit browser map, apps can now directly call up the engine that powers the Maps app, and presto: native Google Maps in any app.

This includes all the good stuff, too - 3D buildings, tilt and rotate, layers. It's all there. This is going to make some apps suck a lot less. Real estate app Trulia is set to roll out a new version of its app with the new Maps API tomorrow. The API will work for all Android devices at API Level 8 or above (that's Android 2.2). 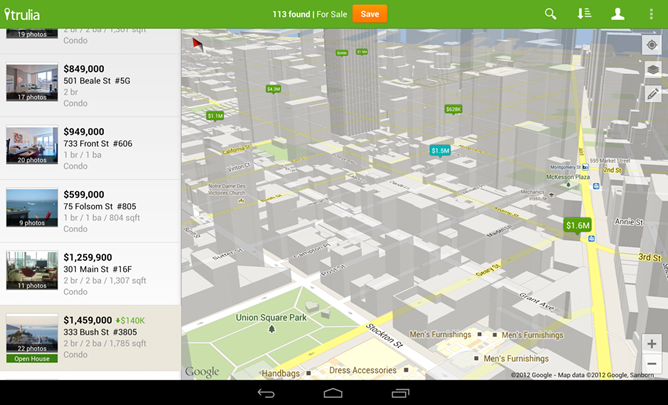 You can check out this 26-minute long video discussing the new Maps API in-depth, here.

So that's awesome item number one. Number two? A Photo Sphere API. What will it allow developers to do? The API is actually pretty limited right now, but it does the one thing you'll actually hope it does - allow you to view Photo Spheres from any app. Using a basic "checker" function, an app determines whether or not a particular image is a Photo Sphere, and if it is, throws you to the Android Photo Sphere viewer.

My big question that isn't exactly answered by Google's blog post is whether or not the viewer is now embedded as in Google Play services, or if this will only work on Android 4.2+ devices. My gut is leaning to the latter, given that Photo Sphere's viewer is probably packed into the new Gallery app somewhere.

The post also sheds a little more light on the workings of Photo Sphere, which as you already know, stores the metadata which the viewer compiles into a sphere in an open format. Specifically, a JPEG file with embedded text-based metadata - it's called XMP, and it's an open format that was actually developed by Adobe. The same format is actually used to generate spherical images in Photoshop.

To enable these new APIs for use on your device, you'll need the latest version of Google Play Services. You can find it below.