I've been enjoying video games for most of my life, and some of them come with a seizure warning before I start playing. This is to make sure that people who are prone to seizures or headaches know that there is a large amount of strobe effects in the game they're about to start.

I've never felt that been susceptible to the problems the warnings are meant to address, but then again, I hadn't played Beat Hazard Ultra, either.

Beast Hazard Ultra is a shoot-em-up game that uses your music to generate levels. Gameplay-wise, it's a mix of Asteroids and the traditional two-joystick shooters that many players are already familiar with. The Android port of this game lets you bring the fun with you, and contains a lot of the same things that made the PC version great: you potentially have an endless amount of experiences, all of which are beautiful.

You start out by choosing a song out of your library. In Android's case, it will automatically scan folders in in local storage and pick out music files that are compatible with the game. It will then add that song to your library, and you can generate a level around it. The general tempo of the song, as well as its bass, determine a number of things: the placement and amount of enemies, the power of your ship's shots, and the colors you experience when you fire will all depend on your choice of track. 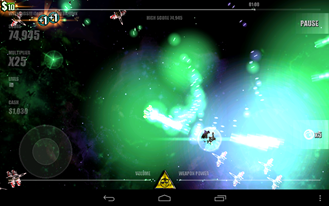 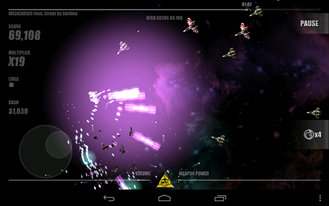 When it comes to visuals, Beat Hazard is not lacking at all; the game can be absolutely beautiful, and gives you the option of reducing the amount of visuals in case it becomes too much.  Beams pulse with every beat of the music as you fly around with one of two controls schemes: you can opt for a single-joystick control where you're automatically pointed at the enemies you want to shoot, or you use two joysticks to assume a more familiar move-and-shoot scheme.

The controls in this game are an interesting beast, because even though you can customize them to a great degree (joystick size, fixed or floating, etc), neither scheme feels like they do their job well. The precision of the joysticks just felt off, and it became really difficult to direct fire exactly where I wanted. Eventually, I resigned myself to relying on strafing around targets while pointed at one side of the screen, which just felt more efficient.

Also, after a few games my head started to throb. Then, out of morbid curiosity, I cranked the visuals up to 200% and instantly regretted it. At that level, there is so much going on, that it becomes overwhelming, with each individual shot taking up a lot of screen real estate. 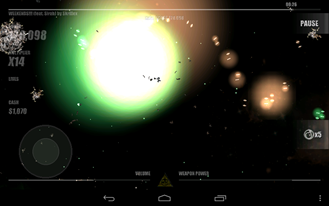 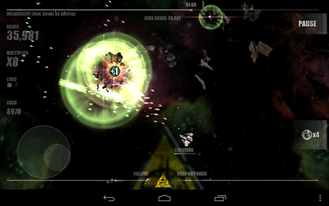 It's generally a crazy experience no matter what song you choose, but naturally there's some front-runners for good levels: the Incubus and Nujabes songs that I tested the game on were nothing like the blistering-fast techno that the demo provides - those almost burned out my eye sockets.

Each level has a number of different enemies and bosses, and a number of power-ups to choose from. Some will increase the amount of damage you do, while others will rack up extra cash and score multipliers. The game provides you with a number of perks available for purchase, giving you passive bonuses that will change the way your game is played. For instance, I was a fan of giving myself some extra power-ups at the start because it tended to make the game a bit more visually appealing.

The game can be a bit annoying at times, because its design trips over itself. Your ship is small, and looks so much like the opposing forces that it's hard to discern where you are beside the giant lasers that it's emitting. Couple this with the massive amount of baddies on the screen, debris, missiles and power-ups, it's very easy to get lost. In a shoot-em-up game where positioning is essential, this can be a bit of a problem. 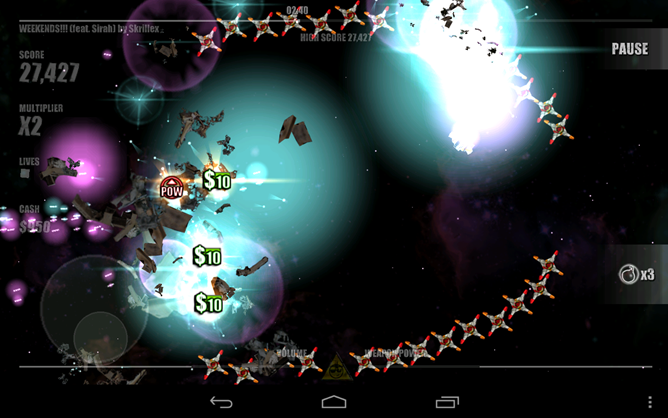 While I would recommend Beat Hazard Ultra, it's not without its warnings. Without tweaking to your graphics and controls, it's easy to feel like it's all show and no substance. So in the interest of giving you guys the easiest time, here's some advice for getting the most out of it:

Beat Hazard Ultra can be found on Google Play for $3.15. There's also a demo, which doesn't allow you to play your own songs.