It's time for another installment of Getting To Know Android, the series where we show you every polished pixel in Google's latest Android update. Today's target is the Gallery, which, in a rare APK Teardown whiff, is not white. I have no idea what was going on with our crazy 4.2 alpha version, but the Gallery is still black, and the icon is still the same. Sorry about that. There is lots of new stuff to talk about, though. 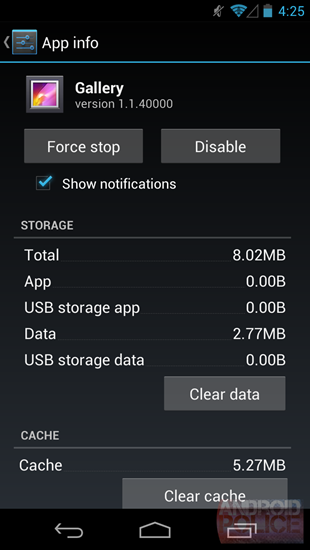 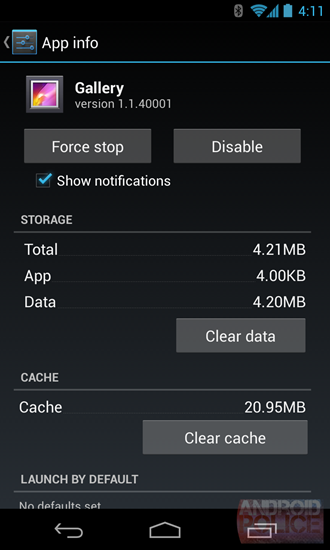 Google's really selling itself short with that version number. The Gallery got a redesign and a bunch of new features, and the Camera (which is part of the Gallery APK) received a completely new interface and a completely new way to take a picture, and Google felt all this was only worth a 0.0.0001 version number boost. Come on, guys! This is easily worth a full 1.0 version increment - brag a little. 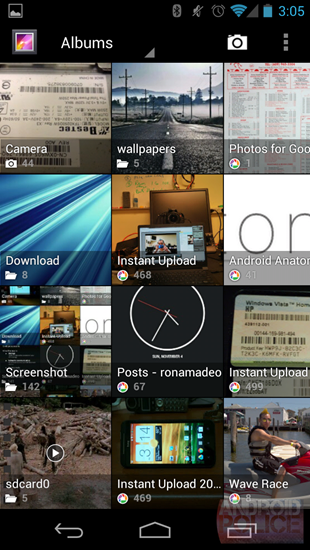 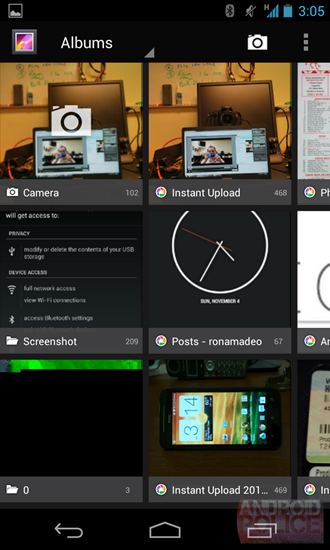 Ok, on to the serious stuff. Here are the Album interfaces, and it's immediately obvious that the new design looks a lot nicer than the old one. Album labels now have a solid gray background, and everything has been shrunk down to a more compact, 1 line layout. The 4.1 Gallery had the album title above the icon and picture count; while the new version switched to an "Icon/title/picture count" layout, which is similar to a file manager display.

Thumbnails are significantly larger, and there is more white space (gray space?) between the thumbnails. The camera album gets a big, semi-transparent camera icon imposed over its thumbnail. 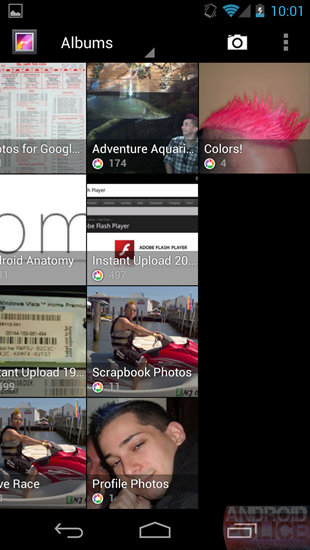 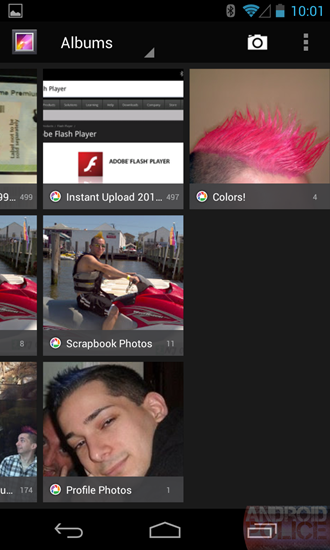 It may be hard to tell on the initial screen, but scroll over a bit and you'll see the background has changed from black to gray. The Nexus 4's lack of an AMOLED screen means black doesn't look as great as it used to, so I won't miss it. I'll skip the other album views (location, times,  people, and tags) because they all look like this. 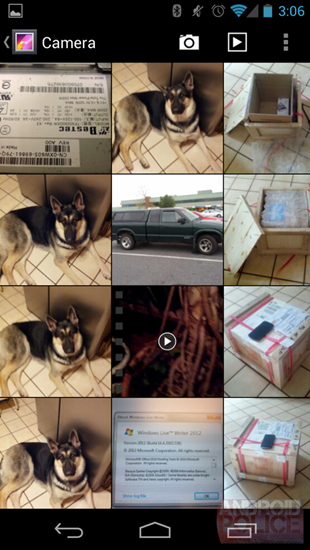 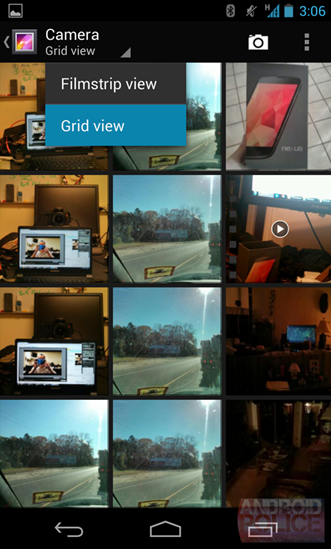 There aren't many differences once you jump into an album. Thumbnails retain their new, roomier spacing, but they shrunk down to the same size as 4.1. The slideshow button has been demoted to the overflow button for a cleaner look. 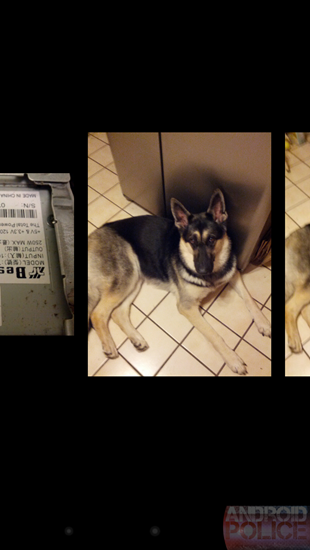 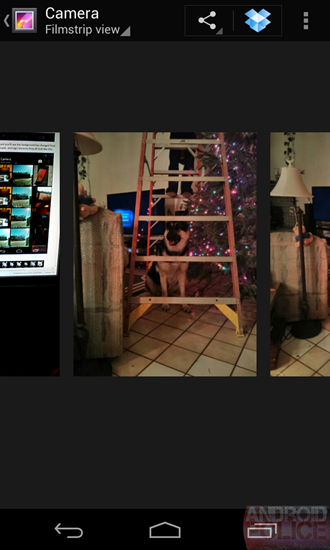 Filmstrip isn't new. It was in 4.1, you just had to pinch-zoom out to get to it. Adding it to a menu now makes it a lot easier to find. This time Google has decided to keep the top action bar, which makes sense, because no picture ever covered that space. They also stopped the system UI from fading out. The old darkroom effect was cute, but not really functional. 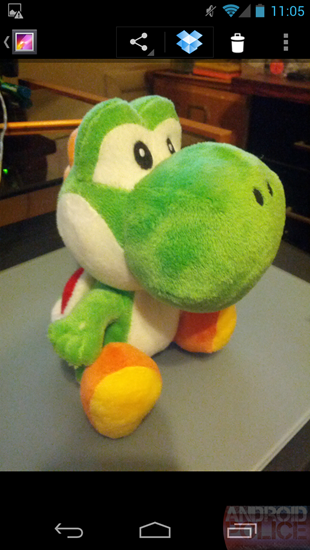 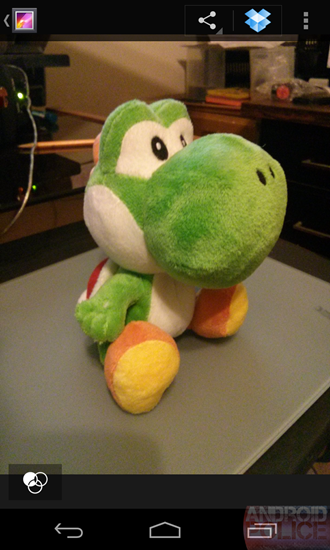 The individual picture UI has seen a few changes. The delete button is now in the overflow menu, which I'm not really happy about (though filmstrip view is nice for deleting). The most horrible change on this screen is that this is yet another instance where Google has arbitrarily decided to hide the status bar. It is never ok to hide the status bar. The only exception is, maybe, for games. Notifications are important.

You can actually have or not have a status bar on this screen depending on how you open it. Viewing a picture from the Gallery will have a bar, but viewing a picture by swiping over from the camera won't - more fodder for a 2nd edition of Stock Android Isn't Perfect.

The "Edit" button is no longer hidden away in the overflow button. It's been moved, oddly, to the lower left, where it just floats as its own little 1-button toolbar. What happened to "stick everything in the action bar"? It would have been fine in the top action bar. If you think it's really important, keep it outside the overflow menu, like you did with delete in 4.1. 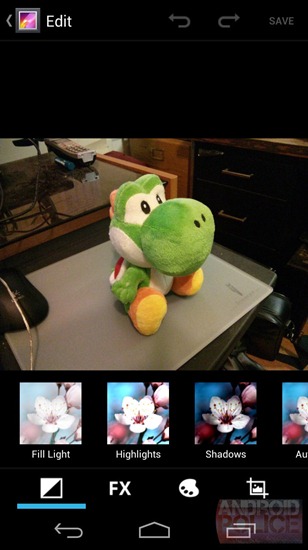 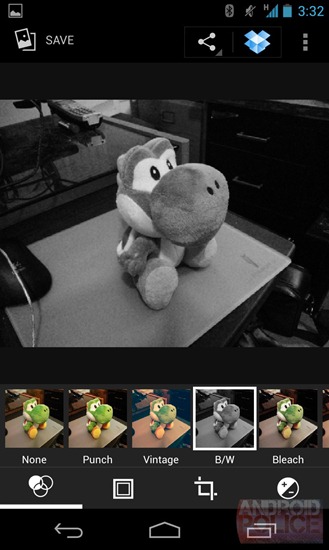 Edit has gotten a huge overhaul. Here they decided to bring the status bar back. Yeah, that's right, in the individual picture screen, 4.2 removed the status bar, and in the edit screen, they added it. I'm starting to think they just flip a coin for every screen.

In another break with Android convention, the Up button (the top-left button that points left) isn't present in the edit interface anymore. It's been replaced with a "Save" button - strange.  Undo and Redo have been moved to the overflow menu, and their former spot has been taken by the usual duo of Share buttons.

The tools at the bottom are all completely different; I'll cover what they actually do later. The new presentation for them is just awesome, though. Rather than the stock flower preview image, they are all live previews of your picture. This is a wonderful user experience decision; I can instantly see what all of them will do to my image. The thumbnails are so good, you don't even really need names. 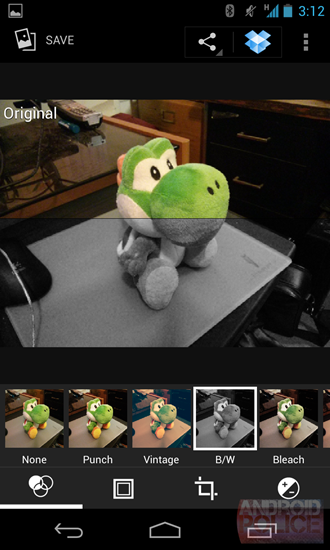 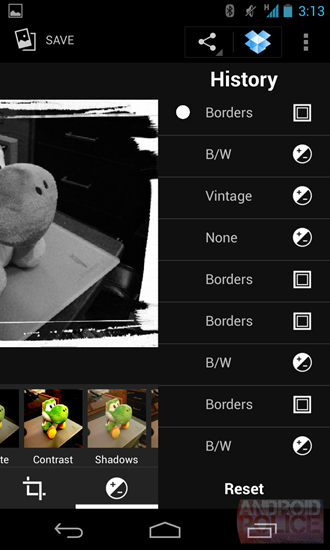 There are two little tricks to this interface that I've found that you probably won't catch at first glance (both of these pictures are 4.2). The first is a movable before and after comparison that happens when you pick an effect and hold your finger on the picture. The black divider line will follow your finger, so while it's 50/50 in my screen shot, you can move the separator up and down; it will even turn vertical if you move your finger to the right when you first touch it.

The other neat addition is a history panel. I stumbled upon this with a horizontal swipe, which is really hard to pull off, but thankfully there's an item for it in the overflow menu. 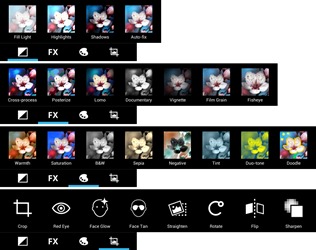 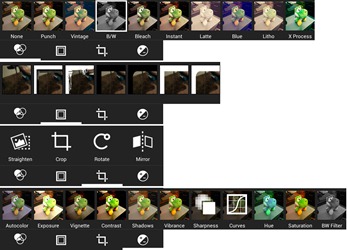 What a mess. Here's all the options from 4.1 (left) and 4.2 (right). Everything is different. Almost every effect from 4.1 was scrapped. Some of the effects in the "crop" tab got cut too: Red eye, face glow, and face tan are all gone.

The first tab is what I imagine Instagram is like. A few fire-and-forget buttons that mess up your picture and allow you to express yourself via a canned photo filter preset. Artsy.

The second tab will let you add a border to your picture (another thing that Instagram probably does) and the third tab holds the usual physical photo adjustments.

The forth tab stands in stark contrast to the first tab, which leans much more toward "Photoshop." These have all sorts of big-boy picture adjustments like exposure, contrast, shadows, hue, saturation, and vibrance. These aren't just one-shot deals, either. They have sliders! Check it out: 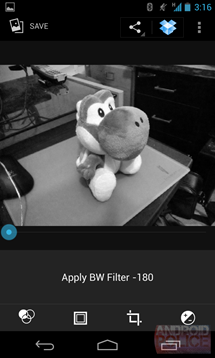 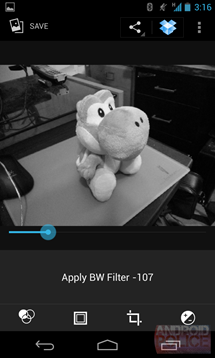 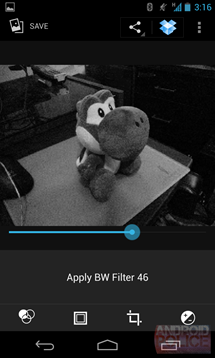 It's not just the sliders that make these better than the tab 1 "Instagram" effects, these are also combinable. So you can up the exposure and adjust the contrast just like a real photo editor. I find it interesting that there's a black and white effect in tab 1 and tab 4: a simple one and an advanced one. 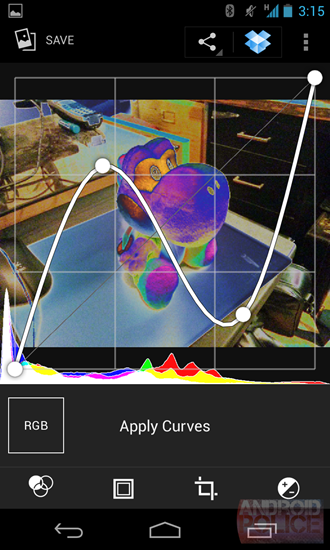 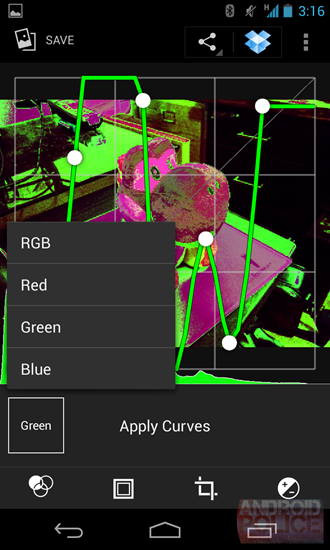 OH MY GOD. It even has curves. Behold my terrifying Demon Yoshi! You can even adjust curves by color - neat. 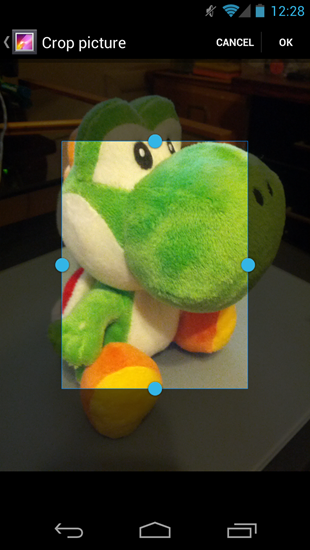 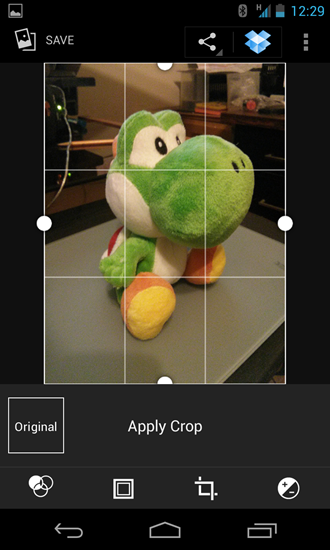 Picking "Crop" from the overflow menu used to launch a custom interface, but now it kicks you directly into the full editor. There's also a new "original" button that will let you pick an aspect ratio for your crop. 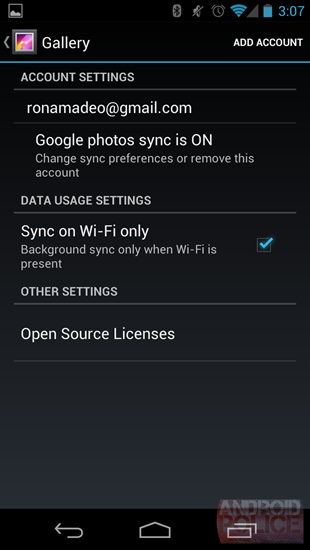 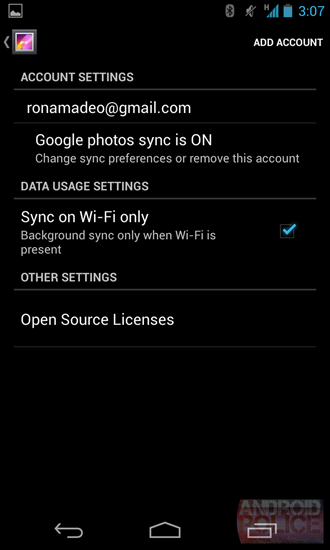 The actual settings are identical, but the design has been tweaked a bit. The "Gallery" heading text was removed (why?) and the blue line has been cut, too. They've also killed that awful background gradient - now if only we could get it banished from the system settings.

That's about it for the Gallery, and I'm thinking we're close to the end of GTKAs for this round, too. There isn't much left to cover. I've already done the clock app to death, and the camera is so different there wouldn't be much comparison. Maybe I can squeeze one more article out of miscellaneous 4.2 stuff. Cross your fingers.