I understand that there have already been dozens of rants in regard to Google's "launch" (and yes, that requires ironic quotes) of the Nexus 4. And I understand that sitting here whining about it doesn't help anyone - so I'm going to avoid that. Really. I mean it. Mostly. But I am going to be critical.

From day one, the Nexus 4 has seemed - essentially - cursed. Victim to some dark techno-magic that has ensured nearly every step of the way that Google's flagship $300-350 phone would be delighting as few consumers as possible in the critical holiday sales season.

At this point, there is little doubt that Google has successfully started turning off would-be buyers. Whether it's because they need a phone now, not next month, or because they've slowly convinced themselves that the advantages of a Nexus phone simply aren't worth the alleged drawbacks of this new model.

I'm not just talking about the Play Store ordering fiasco, either. The Nexus 4 has experienced iPhone 4 antenna-gate levels of design criticism for its glass back. Its lack of LTE (sort of) has been lamented by many. And let's not forget that whole Sandy thing, which led to Google unceremoniously dumping an LG press release into everyone's inboxes with all the fanfare of a prepaid budget phone.

This product launch, for lack of a better word, has sucked. Badly.

I don't fault Google for acts of mother nature. Cancelling the launch event had to be done. And not re-scheduling it somewhere immediately in the wake of the highly-destructive and tragic Hurricane Sandy disaster was in good taste. The eyes of the nation, even the tech nation, were obviously elsewhere during that week. So, they did it without an event.

LG sent out a press release along with a single photo (yes, just one) of absolutely abysmal quality. That was how the world learned of the Nexus 4 officially. Call me crazy, but I'm guessing it doesn't take an army of PR professionals to put together a stock imagery package and place it on Google's highly robust servers with a link in the press email. Oh, and here's that one image everyone got: 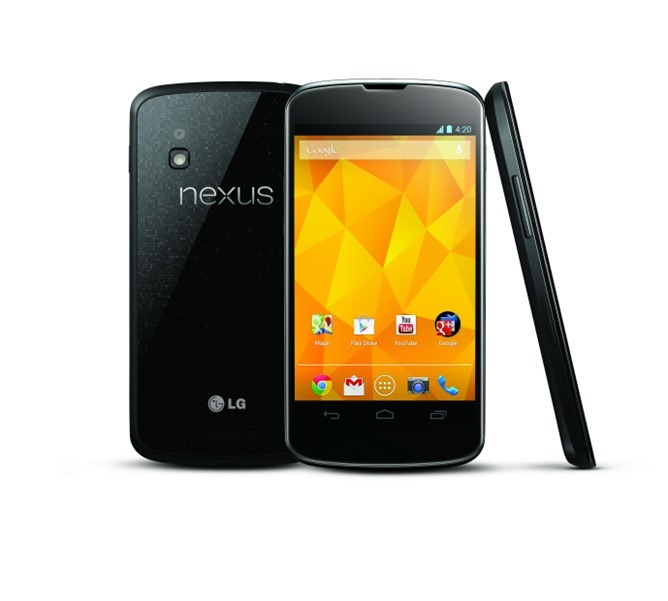 Official press images went up later in the day. None were of particularly outstanding quality.

In an attempt to shed some well-produced light on Android 4.2 and the new Nexus hardware, Google invited a crew from The Verge out to Mountain View for an exclusive first look. And hey, no hard feelings there - The Verge is a great publication, you won't get any arguments from us. The video they put together was top-notch. But is that how you launch a product, Google? Even one whose launch event was cancelled because of weather conditions? That seems a little... bush-league.

From that video, we were forced to start making inferences about some new features (like lockscreen widgets), and were treated to a view of an accessory whose availability, pricing, or frankly, existence in any practical sense of the word we still know almost nothing about: the Nexus 4 wireless charging station. An update would be nice.

The Review Hardware: Trapped And Incomplete

Google had obviously planned to launch the Nexus 4 in New York, and so, much of the Google PR team was already in the city when Sandy started roaring in. At such announcement events, it's not uncommon for a hardware vendor to provide review units to the press on the spot, so that they can start playing with the product immediately. In fact, it's very considerate, and I wish everyone did things this way.

Unfortunately, for those outlets not based in NYC, or that didn't have correspondents near the city, this caused major problems. The Nexus 4s were basically trapped in New York. If you're a major publication, that probably wasn't an issue, but if you're smaller (say, most Android blogs), and you couldn't get into the city, you were sort of out of luck.

This isn't Google's fault, by any means. I doubt they'd have been able to get the phones shipped to a safe location in time. We were lucky enough to have Ron, who was reviewing the phone anyway, drive into NYC once the roads opened back up to get his Nexus 4. Not everyone was so fortunate, though, and the highly staggered review publication dates are pretty good evidence of that.

When you finally did get your Nexus 4 review unit, it came with a serious "but": features are missing, the software isn't final, and we'll issue an update to the retail version of the OS a day before the phone goes on sale. Reviewers were forced to asterisk almost any negative conclusion they came to about the software with a "well, it could be fixed before release," or a "this might be a bug buyers won't see," and several instances of "feature X isn't on my device, so I can't tell you about it yet."

Here we are, a month later, and Android 4.2 in its release form is still riddled with some serious bugs.

The Nexus 4 has been widely regarded by critics as a pretty great smartphone. As the fastest Android phone on the market. As the one with the best user experience. The Android smartphone with the best design, the best looks, and the most promise in terms of support and new features down the road.

But it has been haunted by two of its makers' very deliberate design and engineering decisions: a glass backing, and a lack of LTE. That hasn't stopped people from buying it (at least not many), obviously, but they're critiques Apple faced for two years with the iPhone 4 and 4S, and that were finally rectified with the release of the iPhone 5.

Then, Google decided it was a good idea to make a phone with both of those characteristics. Characteristics that pretty much every tech critic on earth had decided were legitimate flaws in what were two of the most lauded smartphones on earth.

There have already been a number of reported instances of the glass back cracking rather easily on the Nexus 4. Most notably, it happened to The Verge's Joshua Topolsky. LTE, while you wouldn't be able to use it on the GSM-only Nexus 4 on Verizon or Sprint anyway, is still a notable missing feather in Google's cap. Especially when there are actually two radio chips inside the Nexus 4 that basically work with every cellular frequency on earth.

Whether or not you or I personally think these things are important isn't exactly relevant - the Nexus 4's public perception has been tarnished by them, and there's no going back from that. I listened to Android fans lambast the iPhone's glass backing and lack of LTE connecitivty for two years. I don't think the irony here is lost on even the most dedicated of fanboys. And good luck getting a bumper case.

Eventually, the non-stop F5'ing got to the point that Google started directing people to T-Mobile to buy a Nexus 4, at a price above what Google was charging (in essence, given the contractual strings attached). T-Mobile sold out within hours. People wanted it that badly.

Many of those who actually got an order in on launch day then started receiving emails: "Whoops, it might be three weeks before we actually get the phone to you. Our bad, we oversold just a little bit." Oversold? How do you oversell in the era of online retail? How do you not know what your inventory is? That to me remains an utterly absurd excuse.

Then, someone over at XDA started to shed a little light on the situation - a UPS employee allegedly working at a major processing facility in Louisville, Kentucky. According to him, that processing center received 17,000 Nexus 4s, 10,000 of which were of the 16GB variety. Just 17,000 units for a major smartphone launch. It's possible Google had units elsewhere for the US launch, but I wouldn't bet on it - stuff like this is typically handled from one location for the sake of cost and efficiency.  Edit: Probably not true after all.

Due to high demand, your order could not be processed. Please try again later.

As of today, the Nexus 4 is back in stock (sort of), but good luck getting an order in. Google claims they haven't sold out of devices yet, and that's believable: we've been trying since noon to buy some and haven't gotten to the checkout screen once. I don't consider it "fun" to keep hitting F5 on a page in the hopes of getting a company to take my money, personally.

Oh, and if you want an 8GB Nexus 4, good luck getting it before Christmas. 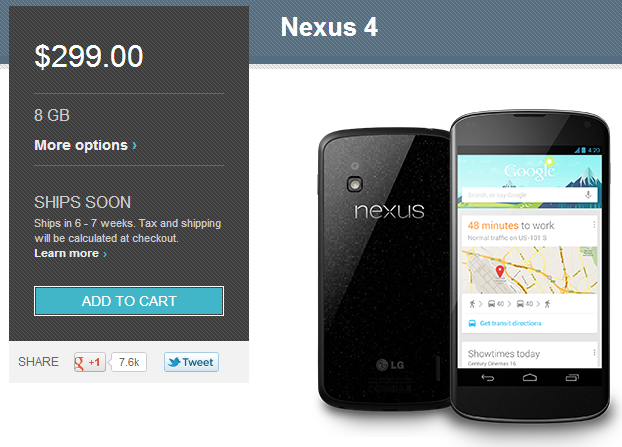 The Result: Your Cart Is Empty

Google, we all understand you're new to launching a smartphone that's actually going to be a little popular. But as one of the most robust web companies in the world, we do expect the experience of not being able to get one to at least be remotely definitive. I don't care if they sell out in five minutes - as long as they're actually sold out, and I can actually stop hammering your storefront with peace of mind that doing so any longer is actually crazy.

Chalk it up to unexpected demand, hurricanes, production bottlenecks, or a desire to do a true "multi-device" launch, the Nexus 4's debut has been a disaster. And even if Google isn't directly to blame, they still let it happen by releasing the Nexus 4 before the supply chain was ready, before the software was ready (arguably), and before even the store through which they are sold was ready. Google couldn't even be bothered to wait to do a proper announcement - even when doing so presented an absolutely golden opportunity to bide time and stock up on more units.

Hindsight is 20/20 and all that, but this goes well beyond an overlooked issue, or a single factor outside of anyone's control. This is a failure to launch on multiple levels.

Tip Of The Day: How To Defeat The Pesky Play Store Server Errors And Order That Elusive Nexus 4