It's time for yet another Nvidia-only game with the "THD" label, and like the excellent Zombie Driver, it's a pilgrim from the PC and console shores. Hamilton's Great Adventure has been a sleeper hit on Steam and the PlayStation 3, thanks to its adventure game presentation and challenging, go-at-your-own-pace puzzle structure. You follow the exploits of Indiana Hamilton and his pet bird Sasha, as they trounce around ancient ruins in search of the Fluxatron, which Hamilton's professor buddy needs to finish his Transmorphanizer. For some reason. THe game is available today in two parts, at $3.99 each. 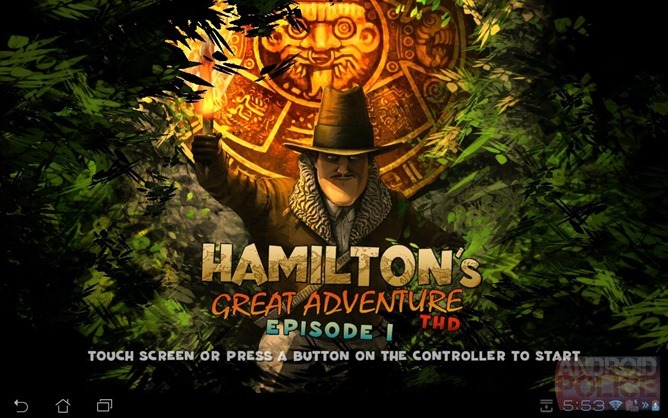 Gameplay boils down to finding the best path through each level for Hamilton, while switching to a bird's eye view with Sasha to explore the level and open up the path. The dual character structure is interesting, and both puzzle and adventure game fans should be well served by the atmosphere. It's a pity, then, that the controls are a drag - flying Sasha around in three dimensions on what is basically a 2D plane is downright frustrating. Still, for those that can oversee its rough translation to mobile, Hamilton's Great Adventure is a mellow, rewarding experience.

Hamilton's story is told as the titular character recounts it to his granddaughter, Amy, in a simple but surprisingly engaging framing device. Our hero is chasing after mysterious thieves who want the professor's gizmo for themselves. Their motives and the nature of the device is told vignette-style as you progress through the game, while the 3D environments themselves present very little of the plot. 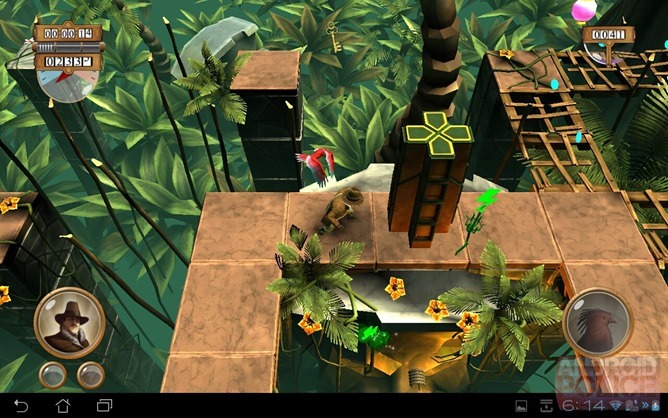 Hamilton pounds the ground through each ancient ruin, running over tiles with various differing properties, dodging exotic enemies and picking up whatever loot he can be bothered with. The linear nature of his movements is deceptively simple: while navigating each level is pretty easy, finding the best (and sometimes the only) way through the twisting paths is not. That's where Sasha comes in. When Hamilton is stuck by a collapsible wall, the bird flies around looking for a switch, or some other means of progressing through the level. Sasha has her own treasure to acquire, and while it's always optional, you'll need to collect all of it for a perfect score.

The game isn't overly difficult, mostly because of a pace that's entirely up to the player. There are a few areas that necessitate a little twitch timing, but nothing that the average Mario veteran would write home about. While you get more points for getting through the level quickly, you're often better suited if you take it slow, carefully planning a route that gets the most treasure and traverses the greatest distance. Sasha takes on a secondary function here: your camera. While Hamilton's view is limited to about five tiles in every direction, Sasha can fly all over the map at any point, spotting routes and valuable loot on the way. Lots of trial and error will see just about everybody through.

Not Just A Pretty Face

The graphics in Hamilton's Great Adventure are not stunning, to be perfectly honest. As is with a lot of Nvidia-exclusive titles, I'm not convinced that Tegra hardware is necessary to achieve these kind of visuals. While there are a lot of polygons being pushed, especially in the larger levels at the end of each chapter, the simple structure of the characters and environments don't make me go "wow" in the same way that other recent titles have. Lighting is basic and particle effects are rare. While the original PC and PS3 versions aren't exactly showstoppers, even they look better than the game does on my Transformer Prime. 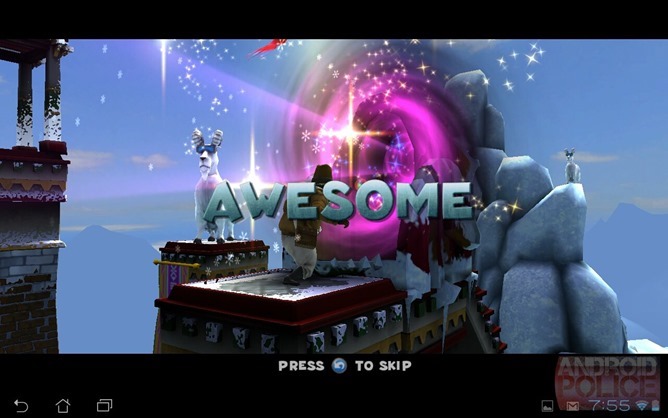 But as they say, it's not what you've got, it's how you use it. The visual design in the game is striking, with cartoony characters matched up to vibrant backgrounds. Even the largely hand-drawn sequences between levels are charming, fleshing out a story that otherwise might seem dull. The various characters make me think of Rare's SNES and N64 glory days - scaring a flying blowfish into expanding and popping its helicopter belt never, ever gets old.

It's a shame that the game tends to stutter and trip, especially when there are moving elements beyond Hamilton and Sasha. On levels with multiple guardians and jumping goats, the framerate would slow to an absolute crawl. This is not a barrier to gameplay (as noted above, it's as fast or as slow as you want it to be) or even the enjoyment of the game itself. But it's disheartening to see Nvidia's claim to fame fall short here, as in many other exclusive titles.

I can Fly, I Just Can't Land

Controlling Hamilton couldn't be simpler: you get a virtual D-pad, an action button and a use button. He plods along at a fast walk, leisurely making his way through the level. Sasha also gets a D-pad, with a use button, a "taunt" (loud screech,) and a button that teleports her back to Hamilton. You can switch between either of the two by tapping their icons on the lower part of the screen. It takes a little getting used to: the Hamilton and Sasha buttons are right where you'd expect standard D-pads to be, so instead they float above the playing area whenever you use them.

While Hamilton is easy, Sasha is very, very frustrating. Getting her to fly up or down on the Z-axis is sometimes maddening. It took me ten minutes to realize that I was supposed to tilt the tablet up or down to control her ascent or descent - something that I didn't find in the brief tutorial and gameplay hints. Even after you realize this non-transparent control element, getting Sasha to go where you want her to is still difficult, thanks to an accelerometer function that's sketchy at best. On more than one occasion the bird would be stuck at the highest or lowest point on the level, and it's easier to start over next to Hamilton than actually fly to your destination. 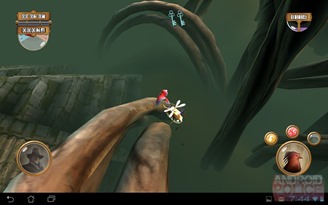 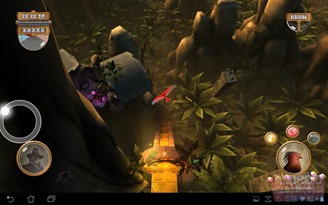 Some questionable design decisions don't help the control issues. While finding the switches that Sasha is supposed to activate is easy enough thanks to bright markers, the activation points themselves are usually a little ways away on the Z-axis. In addition to the difficulties of moving Sasha up and down, the switches often blend into the dark backgrounds, especially at the bottom of the stage. This leaves the player to wander around a small area, not so much looking for a switch as waiting for the control icon to light up. Other hard-to-see elements, like the difference between a floor panel that can be crossed once or twice, will make you want to play on full brightness - and sometimes even that isn't enough.

Don't let the complaints above dissuade you from checking out Hamilton's Great Adventure, especially if you love puzzles. It's a solid title that's backed up by some wonderful level and character design, which more than makes up for the control and visual issues. If you're a fan of indie games that emphasize style and fun over flashy showpieces and explosions, you'll feel right at home. At a time when every other game seems to piggy-back off of the runner or tower defense genres, the pace and flair of Hamilton is a breath of fresh air.

That said, Hamilton's Great Adventure doesn't come cheap. While some of the levels are large, there are only twenty of them, as opposed to 60 on the Steam version. And those levels are broken into two separate purchases at $3.99 each - that's a lot to ask when the aforementioned PC and console versions are just $10. I'd give the Android game a tentative recommendation for the first half (assuming you've got a Tegra smartphone or tablet,) and if you like that enough, spend the extra $4 on the second. 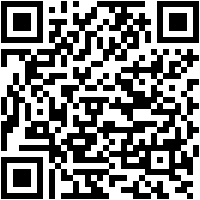 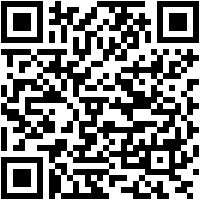 Walt Mossberg Sees His Shadow, Decides To Wait For Spring To Dive Into Mobile