Netflix has been gently updating and adding features ever since it debuted on Android, and while today's addition isn't earth-shattering, it'll be welcome to anyone with a shiny new Nexus device. The primary addition to the 2.1 update is full support for Android 4.2, but the player UI has also gotten a pretty big facelift. Bigger buttons and more transparent elements make it a lot easier to pinpoint tracking, and the whole thing seems at least superficially faster. 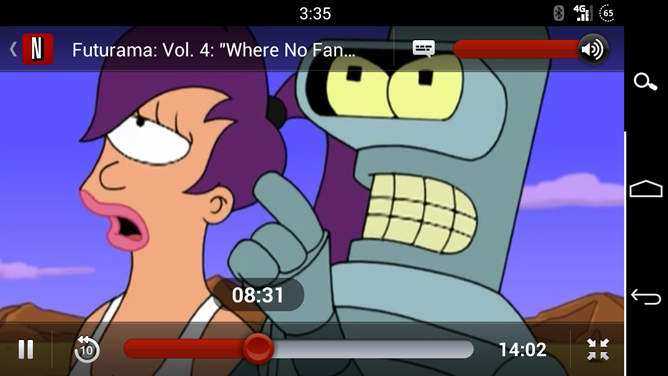 The nicest change to the player interface is the ability to force full screen. That won't mean much for those of you already on a 16:9 device, but for tablets with a little extra space up top and bottom, the cropping makes for a nice lack of borders. You can also crop 4:3 shows and movies if you really feel the need to, like the Futurama shot above, and there's an instant replay button next to play/pause. The browsing interface remains mostly  unchanged, and a few creature comforts (like a "Next episode" button) are still missing, but overall it seems like a nice update. It's available now for all devices.

Sony MDR-X10 Headphones Review: So Much Bass That Even I Feel Old

HTC Ramping Up Wide Europe / Asia Rollout Of Android 4.1 (Jelly Bean) To The One X