There are only so many permutations of the scrolling arcade shooter, but that didn't stop developer CatfishBlues from taking a swing at it with Hyperwave. This is a top-down game that could pass for the spiritual successor to Space Invaders. You have to pilot your lone craft against all the glowing horrors of space to defend humanity. At least that's what the backstory is supposed to be. It's really just an excuse to shoot stuff, but that's okay.

Your ship in Hyperwave is restricted to moving left and right at the bottom of the screen. Auto-fire is always on, so you don't have to stress about that. Before you go thinking this sounds too simple, there's another wrinkle. In addition to controlling where your ship is, you can also control the direction your weapons are firing independent of that. So if there's a power up on the far side of the screen, but a cloud of enemies is right in front of you, it's a fairly simple task to move your ship over while adjusting your cannon to stay on target. This was confusing at first, but I really enjoyed it after some practice. 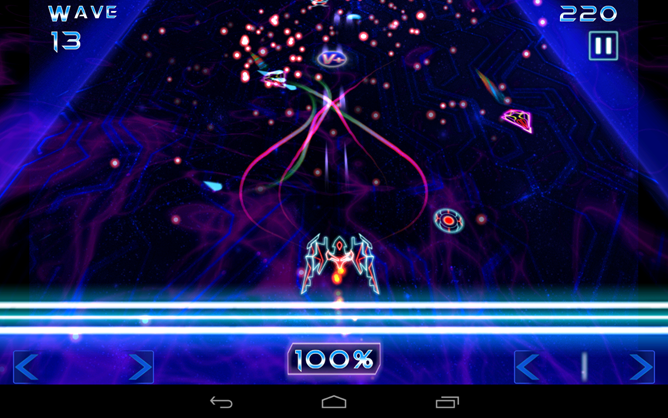 You control these two aspects of movement with dual sliders at the bottom of the screen directly beneath your ship. The slider on the left moves your ship back and forth, and the right side slider tilts your weapons. These controls are appropriately sensitive and accurate, but I feel like they're too small - it's too easy to place your thumb down and lose track of the control.

Hyperwave is a fast game, and there were a few instances where missing the control strip got me in a lot of trouble. I eventually alleviated this concern by just leaving my thumbs on the screen, even if I wasn't maneuvering. As long as you're still in contact, your input will be picked up if you venture out the borders of the control area. Other than this one issue, the controls in Hyperwave work well and I like the approach.

The game is split up into 5 stages, each with 10 waves. As you progress through the stages, the waves get more and more challenging. Your goal is to take out the enemies before they reach the bottom of the screen and damage the energy barrier. The big percent indicator down there will tell you how you're doing. If the barrier reaches 0%, it's game over. You only have one continue per stage, but you can make an additional in-app purchase to boost that to 3 continues (I'm not crazy about this in a paid game). 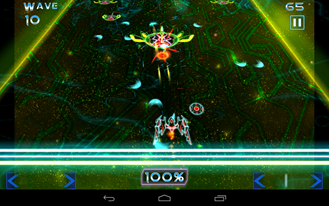 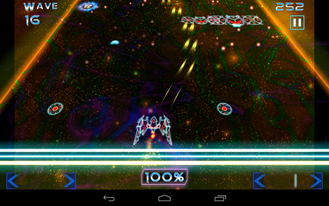 Amidst all the swarms of enemies, there will also be a lot of power ups dropping into play. Some will do boring stuff like upgrade your cannons, refill the energy barrier, or give you some bonus points. What really makes this game fun to play is that just as many of the power ups unlock crazy special attacks. Floating automated drones, energy shockwaves that clear the screen, an electric field that kills anything that comes too close, and more. You will succeed by grabbing all the power ups you can.

I would say that Hyperwave is moderately difficult overall. Toward the end of the stages there get to be so many targets on the screen that it can be nearly impossible to keep up. It seemed totally out of balance until I realized how important the shield recharge power ups were. If you work to keep your energy barrier in good shape, you can make it though the boss battle at the end of the stage. If you complete the arcade levels, there is also an unlockable infinite mode.

Hyperwave has simple graphics, but it's still impressive in its own way. The game looks like a laser light show – everything is a glowing neon wireframe. Luminous creatures pour in from the top of the screen and spin around in an effort tot confuse you. Your weapons shift and glow as they strike out across the screen. The variety of enemies is good too. Some look like  proper space ships, but others look like neon birds or snakes in space.

I haven't had any performance issues with Hyperwave on the Nexus 7, even with a lot of enemies on the screen. The only graphical issue is that some of the lighting effects don't quite reach the edge of the screen. You can probably see the borders on the left and right of the screenshots. 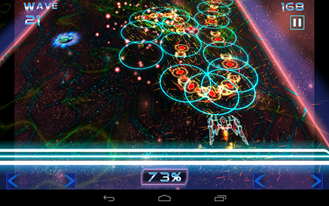 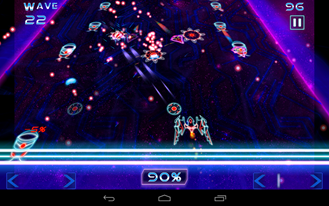 As for the audio, it fits well with the Hyperwave's look. You get a number of pounding techno tracks that are fairly good, at least at first. I'm already finding myself a little sick of hearing the soundtrack, and there's nothing special about the sound of your weapons firing or enemies exploding. I wouldn't blame you for muting this one.

Hyperwave is on sale for $0.99 (50% off). At that price I think it's a good deal, but you shouldn't pay more. Even though I have a few issues with this title, I can't deny that it's pretty fun. You'll definitely get a few hours of enjoyment out of it if you like a good shooter. The upsell to more continues is a little bothersome because Hyperwave is quite hard as it is. That purchase is only a dollar, but I don't think you should go beyond the introductory price. It's not very deep, but Hyperwave is a good game.