Along the way you'll be coached by Nick Fury, who will advance the story and banter with Hulk. You gain experience from your fights, which allow you to level up and unlock new abilities; you can also purchase new enhancements and costumes from the in-game store.

Ultimately, this game feels extremely similar to Infinity Blade in more than just the gameplay: the "fight stuff to get money and level up, then fight them again to get more!" gameplay makes no attempt at being fresh or original. Magic has been replaced by Hulk's powers, which need their own gestures to perform, and battles play out in the same "learn the patterns, perform counters" formula.

For comics fans, this game actually pays a great amount of attention to details ripped from the Marvel Universe. The Hulk has a great reserve of costumes up for purchase, including calls back to previous storylines and alternate universes. Fans of the series should be pleased.

Avengers Initiative's cutscenes also look amazingly like a real S.H.I.E.L.D computer, as the animations are slick and the flow smooth. This could be because there isn't anything interactive about them, so they can be loaded all at once: you're not looking at real menus as much as just watching a high-res video.

Despite some parts that will make fans happy, there are a number of things that will frustrate them. The flaws in this game are readily apparent, even on a relatively high-end device like a Nexus 7.

For starters, the game takes up a ghastly 1.5GB of space, something that can cause its own problems. It also leads to an extremely long download upon purchase, which some are reporting often fails to complete. 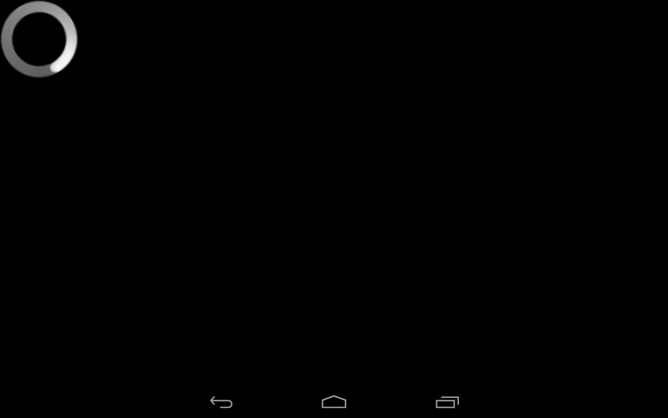 Get used to seeing this. A lot.

Long load times do well to break up any semblance of momentum you have while progressing through the levels. After beating a boss, I was treated to a couple minutes of "black screen with swirling logo." This would be less of a problem if the transition wasn't so dull. At least give us a nice spinning Avengers logo to look at instead of empty space!

Despite all the loading, Avengers Initiative also has a number of graphical issues that can reduce a play session to a jagged, stuttering mess. While most of the choppiness between-fight scenes can be resolved by just powering through the roughness until the environment loads, it seems that no amount of patience fixed the action sequences themselves. Stuttering can be forgiven in cutscenes, but having us fight against the game itself to play it in the first place remains a glaring problem. A game that requires quick reflexes to dodge, deflect, and attack should not have graphical issues that impede the player's ability to react.

The last issue involves a lack of progression. Despite a $6.99 price tag, Avengers Initiative contains a hearty in-app payment system and high prices on nearly everything beside the most basic of basic equipment. Costumes, which can cost thousands in in-game currency, are wholly out of reach of the player who refuses to spend money, as pickups and fight rewards can range from 30 to 200.

At the end of the day, Avengers Initiative was frustrating to play. This was not just because of the graphical errors, but because it felt like it had so much potential, and a string of bad decisions kept that potential from being realized.

Having players only play as the Hulk seems like a major flaw, as the whole point of playing an Avengers game is to, well, play as members of the team. The graphics, while impressive, actively kept the game from being played as it should, and in-app payments and high price points can make players feel like their time isn't worth it.

Maybe with a couple patches the game can at least call itself a decent Android Infinity Blade clone; but for now I think I'd call it a pass.