Update: The price of the LG Intuition on Amazon has been dropped to a penny, a full $150 less than you'd pay at Verizon. We doubt this deal will last long, so if you're in the market for one (why?), now's the time to buy.

Maybe you like the whole phablet idea. Maybe the thought of a handset with an aspect ratio which rivals that of your old CRT monitor sounds like a good thing to you. Really, it sounds like you actually want the Intuition from LG.

If that's the case, why spend full price? Verizon's asking $150 with a two-year agreement for this oversized behemoth. You can now get the same phone, with the same plan, for just $99 from Amazon Wireless. That's a much better deal. 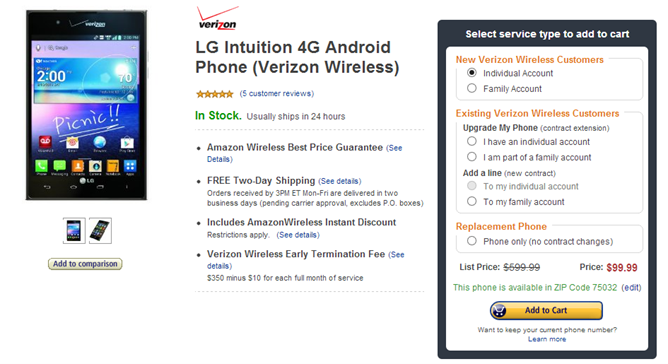 Sound like your dream phone-tablet thing? Hit the link below to make it yours.

[Weekend Poll] What Type Of Keyboard Are You Using On Your Android Phone?