When trying to decide on a new device, most people spend a lot of time comparing various models. How does product X stack up against product Y? Which one offers the most bang for the buck? Which is going to stay relevant the longest? There are so many things to take into consideration - it's quite an overwhelming task.

Thankfully, Sortable.com is there to assist you in the quest for a new gadget. Regardless of whether it's a camera, phone, tablet, laptop, or TV, you can compare all of the most popular products in each class against each other to really figure out which one is the best for you.

For example, let's say you're trying to decide whether to buy the Galaxy S III or the Nexus 4. Simply pop the pair into Sortable's phone comparison generator, and it will output basically everything you want to know about each device, including detailed specs, performance, key differences, user reviews, and how each device compares to similar handsets. 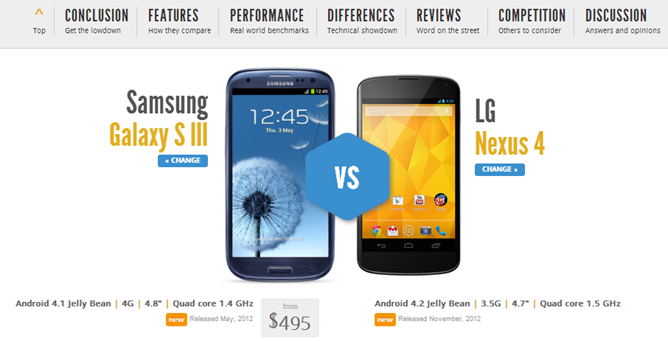 It doesn't just output the results in a boring chart, either - Sortable highlights all of the aforementioned features in a visually interesting way, making it even easier to compare things like display sizes and screen resolution, all the while pulling quotes from reviews and throwing them into the mix: 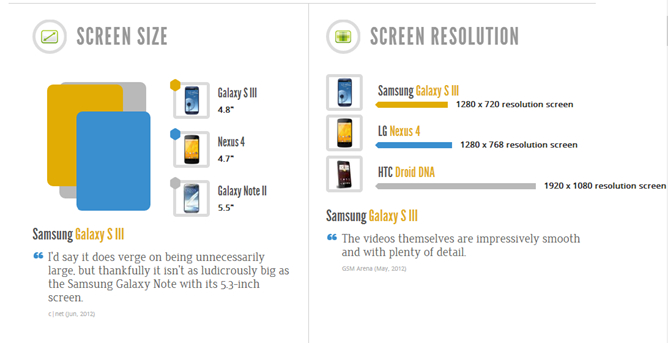 This theme flows throughout the entire page, with graphics giving a clear and concise look at how the devices compare to one another - everything from amount of RAM and processor speed to camera resolution is laid out in an easy to follow manner, completely taking the guesswork out of choosing a new device.

Sortable uses this same approach regardless of which devices are being compared, so if you're trying to figure out which camera, laptop, phone, tablet, or TV to buy this holiday season, hit it up and play around for a while - there's a good chance it will help sway your decision in one way or another. Of course, you don't have to compare two devices to each other - Sortable also gives you the skinny on individual items, too...

Thanks to Sortable, this is your chance to score a brand new 16GB Nexus 10. You just have to follow a few simple rules.

This giveaway is open to anyone where Google is selling the Nexus 10: Australia, France, Germany, Japan, Spain, Canada, the United Kingdom, and the US.
The giveaway is now over. Here is the winner, chosen at random:

The giveaway begins now and will run until Tuesday, November 27 at 12:00 AM PST. At that time, the winner will be randomly selected.

It Turns Out That The Nexus 4 Does, In Fact, Support LTE... But Only In Canada (For Now, At Least)