When you pick up your Android device to play a game, you're probably shooting stuff, jumping over stuff, driving stuff, or maybe flicking stuff. Lather, rinse, repeat. Sometimes these gaming tropes can be genuinely entertaining and clever, but it's all rather expected these days. Waking Mars takes a completely different approach. It's equal parts puzzle solving and adventure, with just a little platforming mixed in. It's a little expensive, but does it deliver?

The word of the day here is unique. Waking Mars seems at first like a generic adventure game, but it quickly becomes so much more. You control the least fortunate scientist in the solar system, who finds himself trapped in a series of underground Martian caves after a geologic event swallows up his basecamp. You suddenly discover that Mars is not barren as once thought. A complex and beautiful ecosystem lives down there, and it becomes your only hope, as well as your biggest threat.

The life forms beneath the surface of Mars are called Zoa. Some are more plant-like, and others scurry around like animals. Each chamber you enter is a new puzzle to be solved. To progress, you must increase the biomass in each cavern by making the Zoa grow and reproduce. Reach the required mass, and tough fibrous Zoa called Cerebranes will collapse from lack of nutrients. With these no longer blocking your path, it's onward. Basically, cultivating Zoa is the main gameplay mechanic.

In Waking Mars, you use seed pods from the Zoa to influence growth and interactions. Sometimes you will just happen upon these seeds on the ground, and other times you have to coax the Zoa to release them. For example, if you throw a Hydron Zoa seed pod at a Halid Zoa, it grows to provide you a little more biomass and drops a few Halid seeds so you can plant more. In other instances, you have to distract a dangerous Prax Zoa with a seed pod so that it doesn't attack you while you hop past.

I'm enthralled with the way you have to experiment to figure out what each Zoa does. The game only spoon-feeds you the first few interactions. After that, you have to try things out and refer to your research log to decide on the best course of action. You really have to use your critical thinking skills. There is a feeling of accomplishment when you discover a new aspect of the Zoa and use that to advance to the next cavern.

This is a 2D game, so you only have to worry about a few controls. Just tap on the left or right sides of the screen to walk in that direction. If you press up above your character, he leaps into the air with the aid of a jetpack. This device has unlimited fuel, which is nice because this might be the only part of Waking Mars that could use some work. 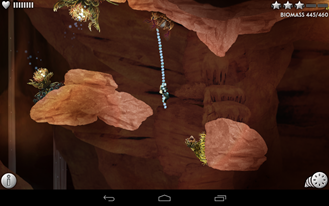 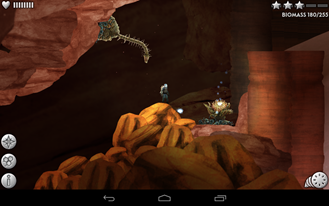 The jetpack will fly to wherever your finger is, and it gets a little difficult to make a soft landing or maneuver around dangerous Zoa. The entire screen essentially becomes the control area when you're flying around, and that can be tedious on a tablet.

Your stock of Zoa pods are available from the button in the lower right corner. Choose the one you want, and drag the arrow from your character to where you want to toss it. This might be a region of fertile soil, or it might be another Zoa. The controls work well overall – even the flight controls aren't bad once you get used to them.

Visually, Waking Mars is a good looking game. I really think this as detailed as a 2D side-scroller needs to be. It gives you the feeling of depth by placing objects in the foreground and background, and the Martian rocks are reasonably varied. The Zoa themselves are really cool in design and animation. They look sufficiently detailed, and their movements are, well, alien. 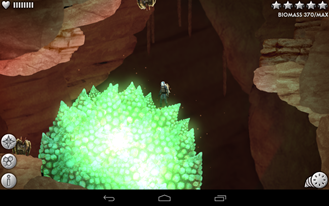 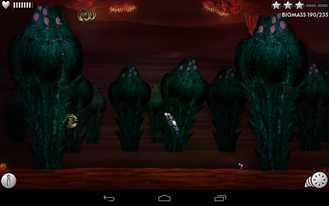 Most of the chambers are a little too similar in appearance, but that just makes it more interesting when you suddenly float into a giant space filled with massive MegaZoa – larger organisms the size of buildings. Just when you start thinking Waking mars is mundane, there's a 40-foot tall glowing plant to prove you wrong.

The audio is definitely worth mentioning, as well. If you have earphones handy, use them. This game is all about immersion. The sound of water dripping, Zoa crinkling their fronds, seed pods bouncing off the walls – it's all done so well. The music is also very atmospheric and relaxing.

This is supposed to be where I lay out the pros and cons of buying a title. Not this time. You know everything you need to know. If Waking Mars sounds at all appealing, bite the bullet and drop the cash on it. This game is fabulous – it's interesting, beautiful, and challenging. If you hate awesome things, I suppose you could skip Waking Mars. Otherwise, $4.99 is reasonable. You can also get Waking Mars as part of the current Humble Bundle.