We're back! A new version of Android is out, and that means a new round of GTKAs. If you somehow haven't heard of GTKA, the recipe is fairly simple: make before and after comparisons whenever there's an Android OS update, and point out all the differences. It's fun, it's interesting, and you just might learn something. Today's target is the system-wide stuff: The Notification Panel, Home Screen, Recent Apps, etc. Let's get to it! 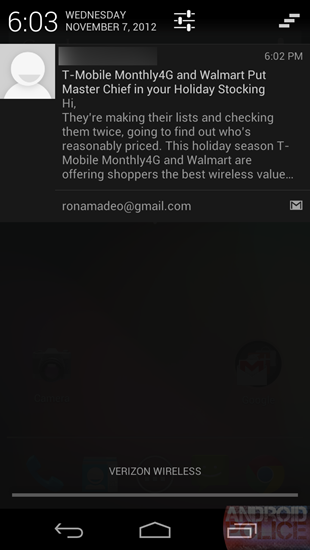 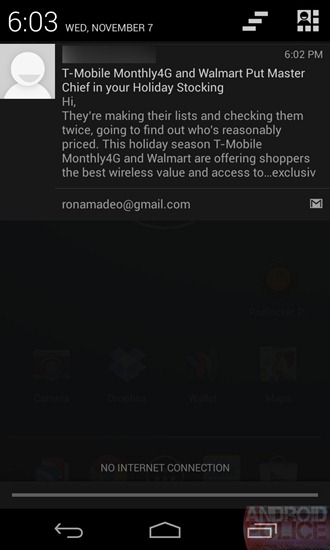 Like always, the old thing, Android 4.1.2 in this case, is on the left, and the new thing, Android 4.2, is on the right. Starting at the top, we see the date has been rearranged, and, for some reason, abbreviated. The day of the week is down to 3 letters, the year has been cut, and everything is down to one line. It's odd that there are abbreviations when there doesn't need to be. I think the old, 2 line date layout looked way better.

Say goodbye to your muscle memory. 4.2 sports a right-aligned "Quick Settings" button, which steals the spot formerly reserved for the "clear all" button. The settings button is completely gone; it's been relegated to the Quick Settings page, which means getting to the settings has increased from 1 tap to 2.

4.1 just had a blue line at the bottom of the notification shade; 4.2 added a chunky, gray, "handle" around the line, which better communicates that you can interact with it. 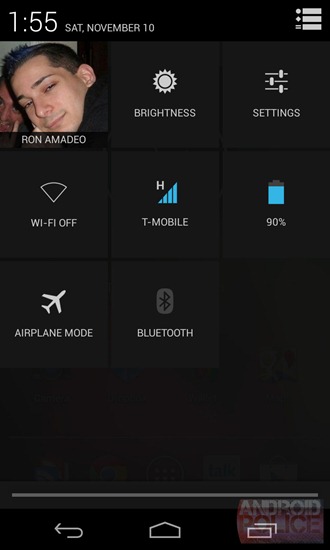 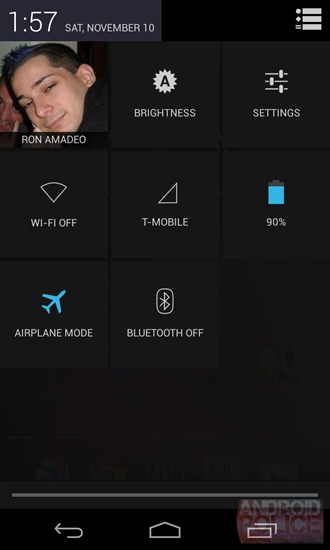 I know we've covered it to death, but, for the sake of completeness, here's what the Quick Settings panel looks like (both of these pictures are 4.2). The giant picture of my face will switch users on a tablet, but on a phone it just brings up a contact card. Multi-user isn't available on phones. Most of these buttons are not toggles, they are just settings shortcuts. The one neat thing is that the icons all reflect the status of the option, so brightness, for example, will have an "A" in the middle of the sun is auto brightness is on.

One thing you might not know, and a change from 4.1, is that the date and time in quick settings and the notification panel is now a button. Tapping on it will bring you to the Date & Time settings. 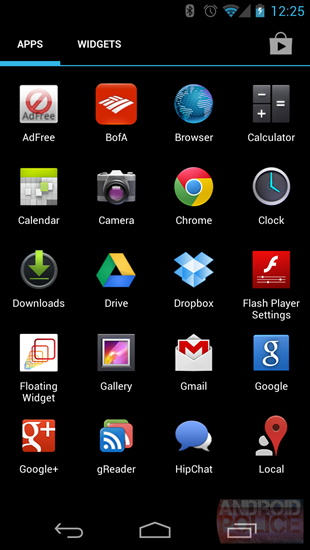 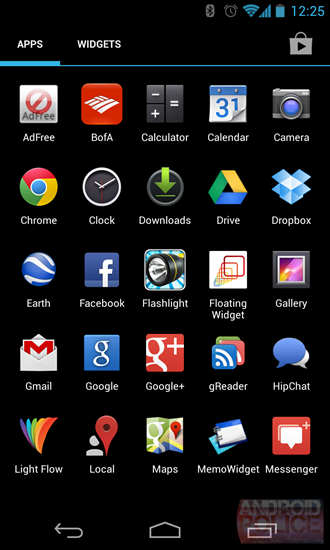 The app drawer has an extra column of apps now. I'm not sure if this is a general 4.2 change, or just for the Nexus 4, which has 48 horizontal pixels more than the Galaxy Nexus. This is really disruptive for the first few days, I couldn't find anything, but after that you get used to it. 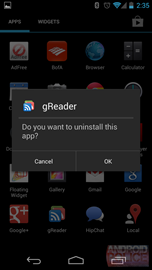 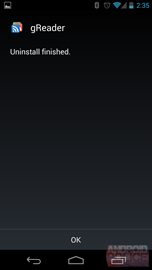 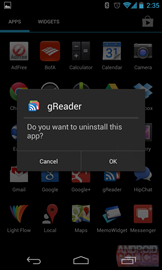 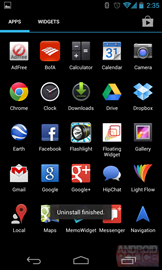 Uninstalling an app from the app drawer is now much nicer. 4.1 gave a full screen popup at the end of an uninstall. Like I previously complained about, having a half popup, half full screen interface is weird, and the weirdness is further compounded by the general emptiness of the "finished" screen. 4.2 does away with the full screen dialog and just has a small toast notification that says "Uninstall finished." This is much less annoying and makes the system seem faster. 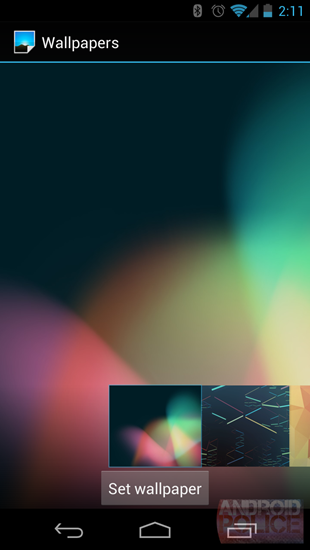 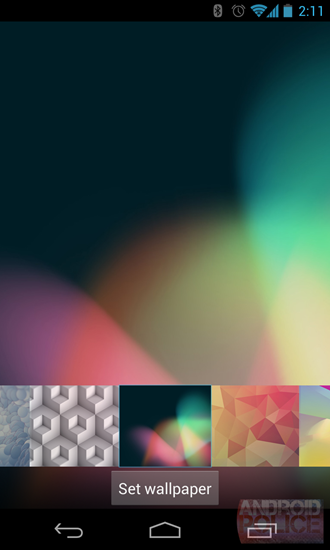 In the category of "Obscure sections of Android that only Ron will check," we have the wallpaper screen. 4.1 has a "Wallpapers" heading, 4.2 does not. I'm proud of this one. 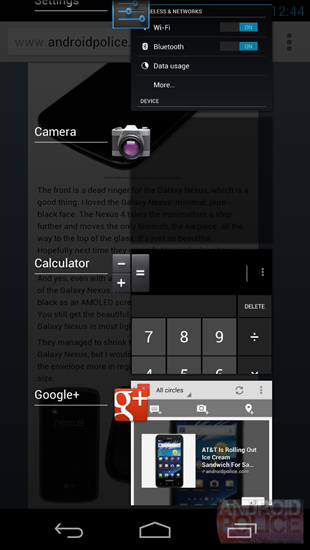 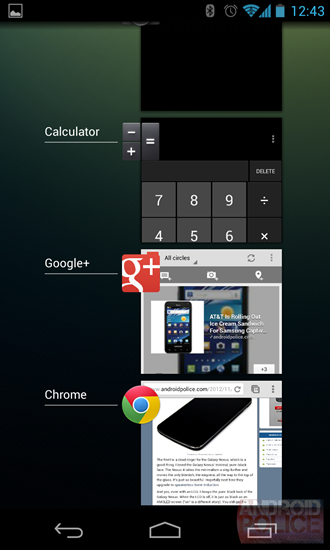 At first glance, not much has changed with Recent Apps, but we're not about first glances here at GTKA. Can you spot all the differences? The status bar is now visible and completely useable while in Recent Apps, and the background is now your desktop wallpaper, instead of the app you're currently in. The behavior has changed, too. The old version would not list your currently open app in the app list, but the new one does. Chrome was open in both of these when I hit the Recent Apps button.

The thing you won't see in these screenshot is the sweet new animation that happens when you hit the Recent Apps button. The currently open app shrinks down into its designated square. Here's the normal speed and slowed down version of that:

4.1's recent app list would only do a fade-in, this is much snazzier. 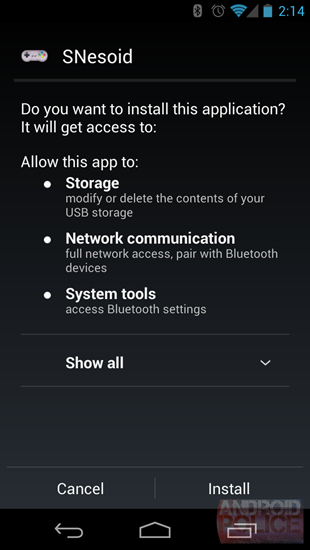 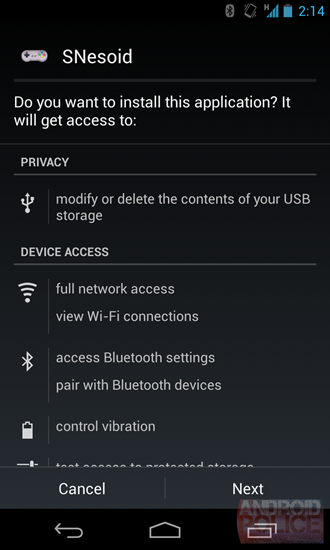 The sideload dialog has gotten a bit of a sprucing up. Permissions are now categorized, each category gets a nice little icon next to it, and everything is nicely separated with thin divider lines. 4.2 also shows much more permissions than 4.1, before it would never tell you about things like "vibration control," more info is always good.

The buttons now force you to look at the permissions, too. If everything doesn't fit on the screen, the install button changes to "Next" and will scroll the screen down. It will do this multiple times if the list of permissions is long enough. When you hit the bottom it changes to the familiar "Install" button. The permissions display on the bottom of App Info looks like this, too. 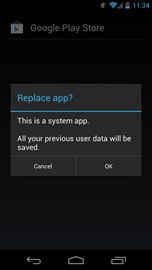 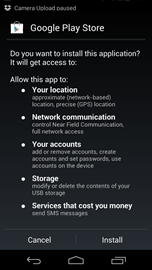 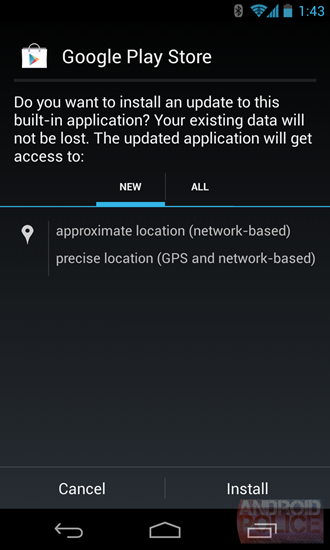 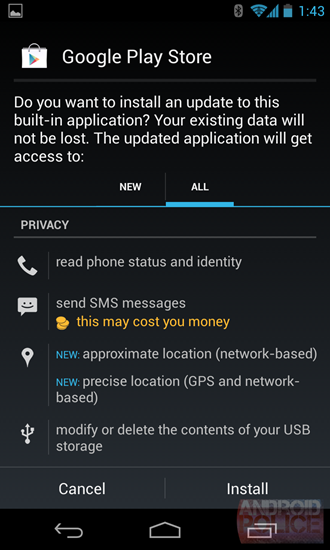 When replacing an existing app, you get this new dialog on the right, which points filters permissions into "new" and "all." They also dumped the "Replace App?" popup and merged it into the permissions screen.

I also really like the new, yellow, "This may cost you money" warning in the right picture. 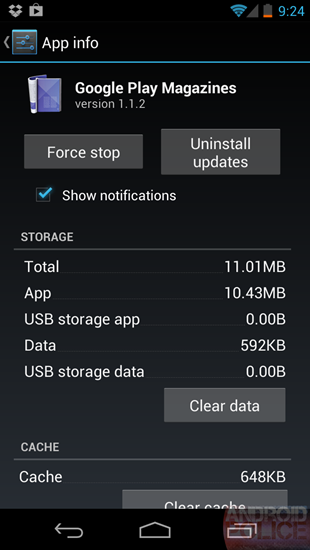 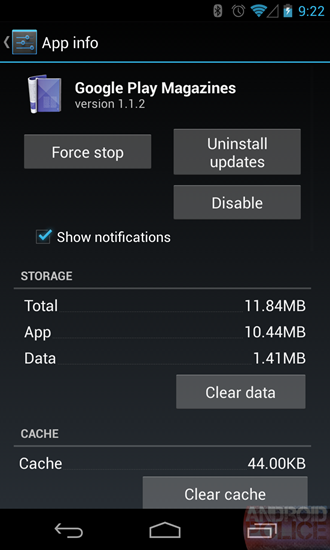 One last thing. In App Info , you can now disable a system app without having to uninstall updates first! The button alignment leaves something to be desired, but this is really handy.

That's it for now! We'll be back with more GTKA goodness later. Next up we're tackling the Gallery.

Republic Wireless Open For All: Preorders For The $259 Motorola DEFY XT Available Now