File this one under How did Google not have a test for this? Got a birthday or anniversary in December? Sorry - Android 4.2 doesn't know what December is. Well, rather the People/Contacts app that comes stock and is part of the Android Open Source Project (AOSP) doesn't. Wait... what?

We couldn't believe it either, but it's true. Google forgot to include December. As in, there are 11 months in a year. January after November. Christmas is ruined. Santa is dead. At least we'll save money on buying presents, right?

We verified this on a Nexus 7 and a Nexus 10 running 4.2. Compare the screenshots of the People app in Android 4.2 (left) with Android 4.1 (right) or any other previous version of Android: 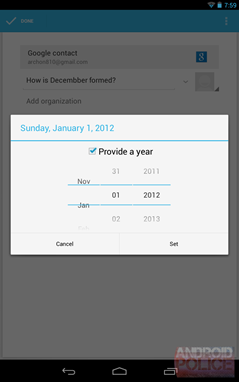 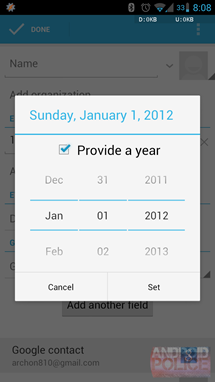 The issue was already reported to the Android bug tracker (bug #39692), but has not been acknowledged by the Android team at the time of this writing yet. I'm expecting that to change very shortly.

We discovered a bug in the Android 4.2 update, which makes it impossible to enter December events in optional fields of the People app (this bug did not affect Calendar). Rest assured, this will be fixed soon so that those of you with December birthdays and anniversaries won't be forgotten by your friends and family.

After digging through the AOSP source, I think the bug can be likely found in one of these commits, probably in the packages/apps/Contacts/src/com/android/contacts/datepicker/DatePicker.java file - if you spot it, definitely drop a note in the comments. I think it has to do with adjusting for indexes that start with 0 - "off by 1" bugs are quite common.

My guess is we won't have to wait for Android 4.2.1 for too long now - leaving a bug like that live would make the North Pole population very-very unhappy. And we don't want that, do we? After all, they're the ones buying a whole lot of Nexuses this holiday season.

Locked and Loaded - The Hunters: Episode One Review

Dexter The Game 2 Reveals Its Dark Passenger To The Play Store For $2.99