Android 4.2 is out now and it brings a bunch of new goodies. Multiple users on a tablet, photospheres, and gesture typing are all pretty neat. What about this Miracast thing, though? If you're part of the majority of Android users out there, you know that it involves screen sharing and something vaguely to do with WiFi. Well, here. Let's clear some of that up for you.

At its most basic level, Miracast is a video streaming specification created by the Wi-Fi Alliance. It allows a user to share whatever is displayed on their device's screen with another compatible product. Whether that's a TV, another smartphone, a tablet, or a desktop. The spec supports up to 1080p HD video and 5.1 surround sound. The dream is, you could download a movie to your tablet via the Play Store (or your preferred medium) and stream it to your TV without ever plugging in a cable and without sacrificing quality. Among other applications.

The neat thing about Miracast is it doesn't require any special hardware to work. So unlike, say, a new wireless standarad (eg, 802.11n, 802.11ac), you won't need to upgrade to a new device in order to use it. In theory anyway. More specifically, Miracast is built on top of WiFi Direct, which allows devices to utilize WiFi to communicate with each other directly, instead of having to hop on a mutual wireless router. There's already a push to make more mobile devices support this standard, since it makes things like file transfers much easier, so Miracast support is already piggybacking on another train's momentum. This will be good for support.

That's because it kind of is! The main difference is that, unlike Apple's mirroring standard, this would be open so that any platform or device manufacturer could jump on board and support it. Even Apple! Though, probably not. As of right now, there are a number of major players who are willing to work on this including Intel, AMD, Broadcom, Ralink, NVIDIA, TI, Qualcomm, Marvell, MediaTek, and the Android platform. Of course, putting a bunch of brand names together doesn't guarantee an awesome and mighty force to be reckoned with (I miss you, Android Update Alliance). Still, it's good to see so many companies pay attention right off the bat.

Ultimately, though, the effect would be largely the same. Synergy between your devices. It's an attempt to remove the wily wires, the confusing configurations, and the irritating interfaces from media sharing. Virtually every device you own has two-to-five ways to communicate wirelessly, right? Why can't they just talk to each other and everything be simple? That's the idea.

Sounds Great! So, Can I Use It Now? 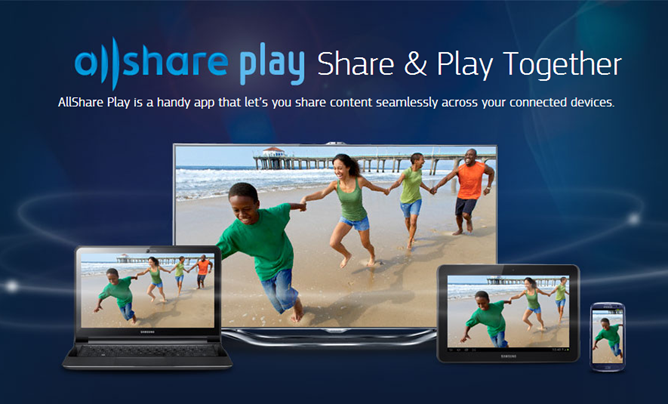 Maybe! To be honest, probably not yet, but it kinda depends on what devices you own. For example, did you know that Samsung already has a Miracast-based video streaming solution in some of its devices? It's called AllShare. While this software is more or less limited to Samsung's own brand of hardware, if you own a Galaxy S III, a Galaxy Tab 2 10.1, a Series 7 Chronos laptop, and an LED 8000 Series Smart TV, then you can share content between any of them with relative ease! Of course, those four devices could also cost you over $5000 easily.

Outside of Samsung's compatible-yet-still-proprietary solutions, the entries are pretty sparse. The Nexus 4 and 10 both support it officially, though you'd be hard-pressed to find a working demo of it. In fact, while Google claims the Nexus 10 can utilize it, the option is entirely absent. According to Ars Technica, a Google rep has stated the feature could be enabled in a future software update, but no indication was given as to when that might happen. The option is also missing from Nexus 7s and Galaxy Nexuses that have been updated to Android 4.2. This may be due to a lack of Miracast certification. It's unclear when or if the option will roll out. 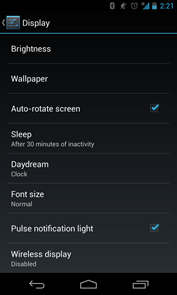 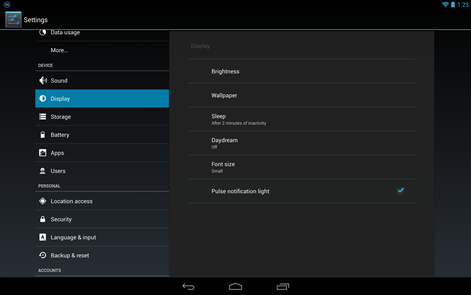 Since the hardware requirements are rather low, and the standard is already building on top of another spec that companies have reason to push rather hard, it's reasonable to believe that, in a year, this will be about as ubiquitous as NFC is on smartphones now. At least among phones and tablets. Televisions will take a lot longer, especially if yours doesn't have WiFi built in. Since people upgrade their TVs, computer monitors, laptops and desktops much less frequently than their tablets and smartphones, it will take a lot more time for you to find places to stream to.

The upshot is, if you really want it, you don't necessarily have to replace your TV. Set top boxes, wireless dongles, and perhaps even Blu-Ray players can also act as Miracast receivers. If you're in the market for a new device in this category, be on the look out for branding that indicates compatibility. You could buy a dedicated mirroring box like the Push2TV from Netgear. Beyond that, there isn't too much outside of dedicated TVs. There will be, though. Here's a list of components, chipsets, or products that are in development that will support Miracast:

More are sure to come. Be on the look out for more devices that list "“Wi-Fi CERTIFIED Miracast™" among its features, as this is the officially-approved designation (PDF). I wish I had better news for you, but unfortunately, this is an extremely new product and you'll be waiting a while to see it supported widely.

Okay... Am I Going To Forget About This For Years Until It Works?

To be honest, maybe. It's a little like NFC in that regard. What you're seeing here isn't so much a brand new feature that everyone can use today (although some can), but more the groundwork being laid to do some really awesome things in the future. Remember when NFC was first announced and Android Beam looked amazing, until you realized your phone didn't have NFC and you were a year and a half away from an upgrade? This is a little like that, only not quite as bad.

For starters, if you have a device without Miracast support, but you do have Wi-Fi Direct, it's possible that it could be added in an update later. Possible. Not guaranteed. Among the things needed for this feature to become available are certification that it works with the new spec (not hard) and software to actually do it (much harder). This will either mean Android 4.2 will need to roll out to your device — so, see some of you in six months to a year—or some other app like Samsung's AllShare will need to be made available. A lot of blocks need to fall into place here.

On the other hand, two or three years from now, it's like that virtually every new phone or tablet sold will support Miracast. At that point, there will probably also be a wide range of set top boxes or dongles that can add the functionality to your TV or computer monitor. Heck, if we're really lucky, maybe Windows will even support it on some hardware. Maybe not in the OS, but at least via some hardware certification and some software download.

In the meantime, if you've got the constellation alignment of devices that allows you to use it, have fun. Otherwise, abide by the mantra that all technology must endure: just keep waiting. It will get better.