The Nexus 4 retail software update is out! Previously, all Nexus 4 were running pre-release software, which was missing a few things. I reviewed the Nexus 4 as best I could with the beta software, but I wanted to update it once I had a few days to play with the final build.

Now that the final software is out, I've updated my review, and, to save people that have already read it from digging through 6000 words looking for updates, I'm putting all the new info in this article, too. So, if you haven't read the review and want to know all about the Nexus 4, skip this article, and go read the whole, updated thing. If you've previously read the review and only want to know what's new in the retail build, you want to read this. Got it? Good. 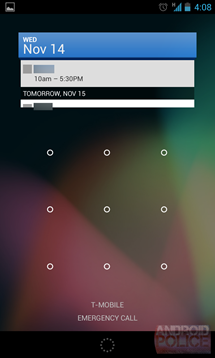 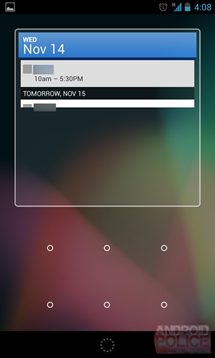 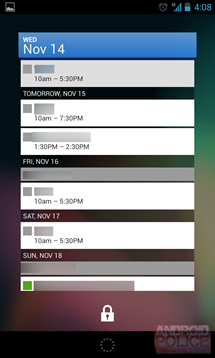 Here's a good example of what you can do with the lock screen. The calendar is a widget. The lock screen has multiple pages, just like a home screen. The main screen opens with what you see in the first picture. The unlock method is exposed, and the widget is shrunk down to the top quarter of the screen. If you pull the widget area down (like the notification panel), the unlock area will shrink down to a button, and the widget will expand.

This brings me to the two big problems I have with this lock screen widget method: 1) You get 1 widget per screen. In the picture on the right, you can't resize that calendar widget; it will always be that big. 2) Every unlock method takes up 3/4 of the screen. All the available unlock methods were designed in a pre-lock screen widget era, so none of them ever bothered being compact. As a result, if you have the lock method up, you can only see a tiny sliver of widget. Most of the stock Android widgets were designed for 10-inch tablets, so this isn't a useful amount of space. 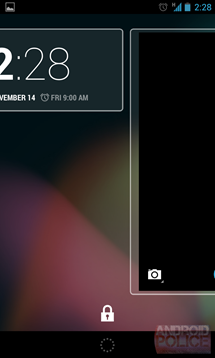 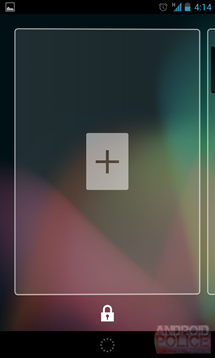 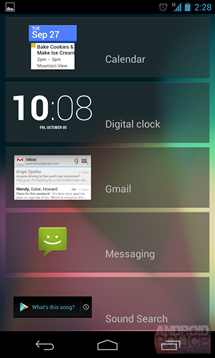 Sliding to the right screen will always bring up the camera. You can't change this. The really annoying thing is that, once you're in the camera, you cannot slide to the left to go back to your home screens. You're stuck there unless you hit the back button.

Here's the full lineup of full expanded widgets. Even though some widgets like Clock and Sound Search are clearly small enough to both fit on a screen, you are only allowed 1 per screen.

Widgets work just like they do on the home screen. Calendar, Messaging, and Gmail are all scrollable, and other than that, just about any button will launch the full application. 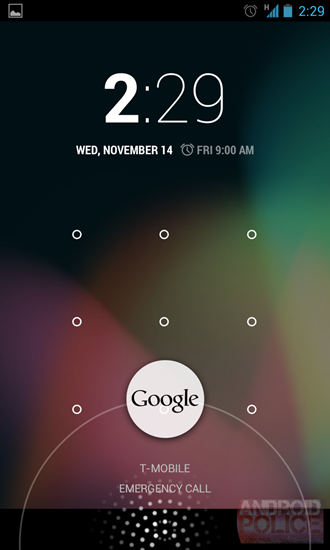 If you've been wondering what the little dotted circle is in the system bar, that's inviting you to launch Google Now, which is accessible from any screen.

The more security-conscious among you may be saying "What's the point of a lock screen when lots of personal info can now be accessed from the lock screen?" but Google actually did a good job with locking everything down. 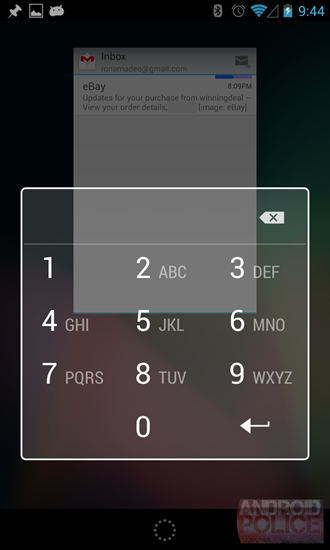 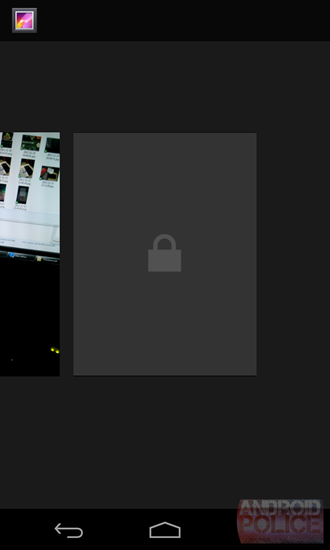 If you use a secure unlock method (Pattern, PIN, or Face) and someone steals your phone, they'll see any information available in the widgets you've already set up. That means, potentially, the first 2 lines of your Gmail, your texts, and your entire calendar. Any time they tap on anything, though, they'll have the lock screen pop up in their face and demand authentication. The Notification panel can't be opened from a secure lock screen, and widgets can't be added without authenticating. Swiping over to the camera will allow them to take pictures, but they can't look at old photos.

If you're hardcore about security, you probably don't want any lock screen widgets, because of what they give others access to. Thankfully, you can't add widgets without authenticating, so, as long as you don't add any, you're just as secure as you've always been.

I ran the usual benchmarks again on the final software build. Nothing's changed.

I've heard theories that the poor benchmark scores are due to overheating/thermal throttling, so I threw the phone in the freezer for a half hour, and ran the benchmarks again (while still in the freezer), and the scores still weren't any different. 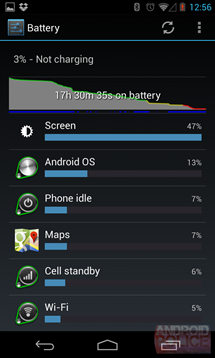 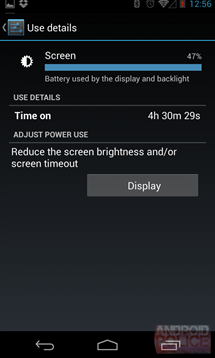 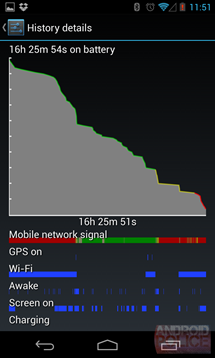 Battery life has improved, which is probably a combination of better software and the battery having a few more cycles under its belt. Whatever the case, the battery should be enough to get you through the day. I forgot to take a screenshot of the full graph at the end of the day, so the picture on the right is from earlier the same day, about 1 and a half hours before it died.

For this run, I had auto brightness on all day, streamed Pandora over bluetooth for about an hour while driving to and from work, took a phone call and some texts, and had about a 50/50 split between Wi-Fi and cell data time. GPS, Sync, and Bluetooth were on the whole time, as were all my normal apps like Facebook and Lightflow. I just used my phone like normal. 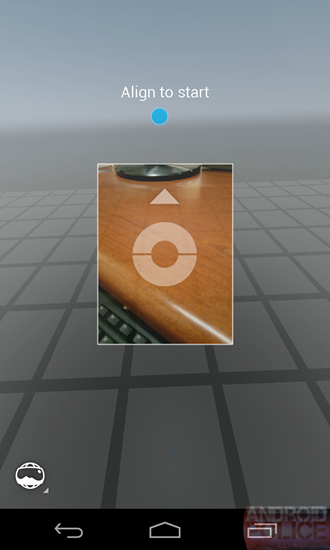 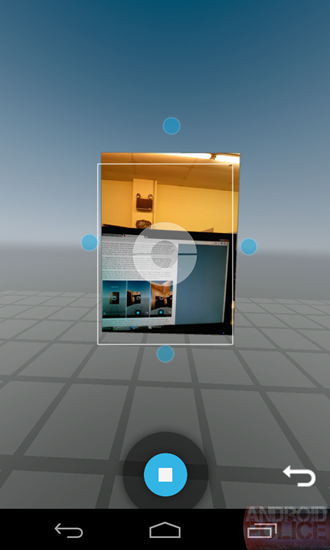 The Photo Sphere interface got even better. It now points you towards the closest blue dot with a white arrow and, when you take a picture, temporarily shows you the available directions with blue dots around your last picture. Very cool.

A lot of stuff I was hoping would get fixed is still broken. The timer still doesn't have Jelly Bean-style buttons in the notification, Voice Actions still sets an alarm when you tell it to set a timer, and the clock app doesn't properly spawn a notification if you skip the dismiss screen. These are minor complaints, though.

Overall, the update changed very little. The improved battery life is great news, and.... that's about it. Lock screen widgets are so handicapped by the arbitrary 1-per-page limitation and the fact that the unlock methods take up most of the screen, that they really aren't useful.