In case you haven't heard (and how could you not?), Google has sold out of pretty much every new Nexus they've launched. If you head to the Play Store as of this writing, you cannot buy a Nexus 4 or Nexus 10. Even the 3G-connected Nexus 7 was unavailable for a while. As if that wasn't enough, customers started receiving emails saying their shiny new Nexus 4s were going to be delayed as much as three weeks.

So, what do we do now? Call up customer service and yell and complain? Vent on the internet and talk about how much Google screwed up this launch? Request someone's head on a platter? Chill out, wait for our products to arrive and be glad that they exist in the first place?

Can we do all of the above, actually? I think that would be a nice medium. Minus the beheadings, of course.

Preface: You're Right To Be Pissed

This would make anyone upset.

Before I get off defending Google (and I will), let me start with this: you're right. You eagerly awaited the day that you could order your sparkly new Nexus 4. You haven't even held it in your hands, but you're taking it on faith and other people's reviews that Google has released a great product and you're willing to shell out $300+ for that belief. You feverishly hit refresh because the site wouldn't load, pausing only for a second to wonder if all this refreshing is why the site won't load, but eventually it paid off. You got in!

You're right. This is consumer-unfriendly, it's problematic for the most avid Android fans, and ultimately, it cements Google's reputation as being bad at product launches. This is the third time this year that the company has launched a major Nexus and/or Nexuses (Nexiiii). The only time it went off without a hitch was when the Galaxy Nexus arrived in a GSM variant and that was nearly six months after the initial Verizon launch when demand had already died down.

So, yes. Google screwed up. In fact, the company has screwed up repeatedly this year. However, don't give up hope yet. For a few reasons.

Defense #1: Yes, Google Really Is New At This 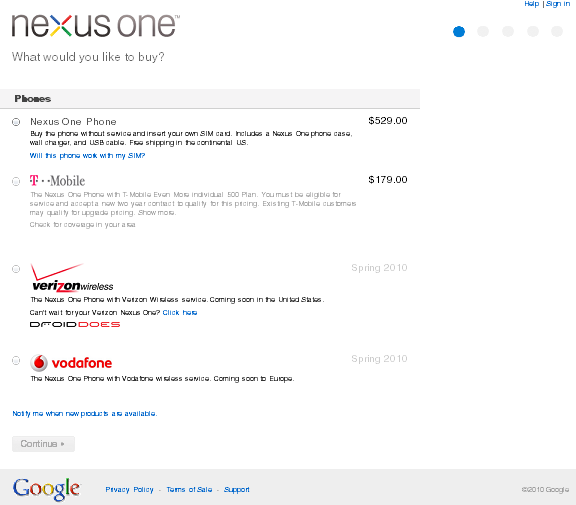 What is this? Is this even a site?

It's easy to think that Google should have had all of its ducks in a row for a long time now and we should totally expect better from a multi-billion dollar, international corporation. In a way, that is true. People expect this to be easy, and it's not like Google's scraping to make ends meet. This is feasible! However, keep in mind that Google has only been doing this for less than a year, really.

"Whoa, whoa, whoa. Hold on there, flatfoot. Google's been selling devices since the G1!"

Flatfoot? Why in the world... Anyway. Yes, technically, Google sold unlocked G1s. To developers. In small amounts. This hardly counts as a consumer-facing, global commercial entity. In fact, a better argument would be that it's been selling devices since the Nexus One in 2010, but even that's not entirely fair. The Nexus One was an overly ambitious project that fell flat on its face. Virtually the entire process has been scrapped and rebuilt from the ground up. That became manifest with the Play Store, and the devices category that was only launched in April of this year.

No matter how you slice it, what Google is trying to do by selling you unlocked devices without touching carriers at a low price is something it only started doing very recently. And it's being compared to companies that have decades of experience. We shouldn't lower our expectations because of this, but when something goes wrong, it should certainly be kept in mind before declaring that Google should "give up on the Nexus line entirely" or similar hyperbole.

Defense #2: The Entire Experience Has Gotten Much Better Very Quickly 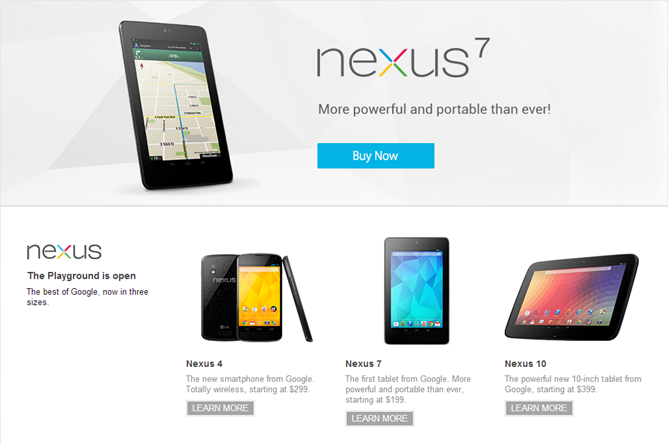 Ultimately, very little of that original Nexus One program remains in place beyond the Nexus brand. The high price tag, the carrier partnerships, the lack of a centralized storefront - all of it has been replaced or improved. Remember when you didn't even have a phone number to call? That was awful. Sending people to forums to get their questions answered was an unbelievable oversight. Yes, Google still hasn't gotten it down to a breeze yet, but when you consider how god awful the shopping experience has been up until now, we have reason to hope for the future.

The Play Store is an entire suite of products and services, none of which are capable of popping up overnight. The entire process started a little under a year and a half ago when the Android Market added books and movies to its repertoire. Since then, music has been added in November of 2011, devices in April 2012, and magazines at I/O in June 2012. It's been a flurry. On the backend we've seen overhauls to the Google Wallet system, customer service (again, that glorious phone support number), and, oh yeah, wider launches for all of these on an international level.

In short, it's getting better. Not worse. This is not a case of Google being on top and then screwing up royally. This is a case of Google starting on the bottom and working its way up. There are more options available to more people and fewer headaches for those consumers than ever before. So, when you say that this launch was a disaster and that things need to be fixed, you can at least take some comfort in the knowledge that your complaints are not falling on deaf ears, if Mountain View's track record is any indication.

Defense #3: Given Past Sales, Inventory Problems Were Entirely Unpredictable

Of course, ultimately, what we're really arguing about here isn't whether Google can do anything right. We're specifically talking about this launch. Even more specifically, we're talking about the Play Store's inventory system. Did anyone have problems getting answers from customer service? Did anyone receive broken devices? Was anyone's order canceled or never acknowledged? I mean that seriously, because those are real complaints if it happened. Really, though, it seems like the bulk of the problem here is that no one inside the Googleplex anticipated the demand for these devices.

And can you blame them?

Let's just take a brief look at the history of Google's launch devices, shall we? The Galaxy Nexus, even on Verizon, has not been a huge seller. The Nexus One before it was abysmal. Do I even need to mention the Xoom? As Android nerds, we love every single new stock experience device. However, when it comes to inventory, someone has to decide how many orders to place, and that's a numbers game that is very difficult to predict here. 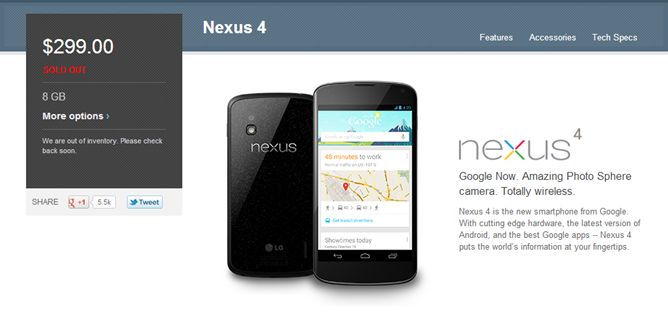 This is a modern miracle, really.

For starters, people in the U.S. in particular just don't tend to buy phones off contract. Usually. Most people just wait for their next upgrade and, even then, the person that you can coax $300 out of is a rare one. It's not the subsidy either, since most plans will end up costing the same either way. It really is the dollar figure. When the Nexus One launched with a $500+ tag, we scoffed. The GSM Galaxy Nexus didn't fare very well either, since it was overshadowed by things like the One X or the rumored GSIII. So, if your job is determining how many Nexus 4s to order, the historical data you're looking at would indicate you should be cautiously optimistic at best.

The same thing goes for the Nexus 10. Sure, we all know it's a great device. But will customers take to it? Most 10" Android tablets lately have not sold very well. In fact, even before the Nexus 7, most attention was on smaller form factors. You don't want a repeat of the Xoom issue, do you? In fact, this hesitancy is likely the reason that Google hasn't launched carrier-connected versions of its tablets immediately. "Let's wait and see if people even want this before we release a more expensive version."

While Google has been selling devices on the Play Store for several months, and has been making Nexuses for a couple of years now, it's arguable that these three new ones are the first to potentially be real commercial successes. Someone inside the company may have made an error (or series of errors) in anticipating demand, but that's largely because they've never been in this position before.

Oh, and more than anything, this indicates that demand for Nexuses is increasing. That's a fantastic thing for you and me. We really need manufacturers to keep producing these things if we want to continue to have awesome, high-quality, stock Android devices. However, those companies tend to be influenced mostly by sales. If customer numbers go up, the amount of effort and investment in the Nexus program goes up. It sucks that the inventory system got banged up all to hell this time around, but if you think of those as growing pains, it's a little easier to stomach.

Moral Of The Story: Be Upset, But Don't Panic

Like I said at the beginning, it's okay to be upset. You want your Nexus 4/10 and you don't want to wait. It stings even more that you're being rewarded for your devotion to the platform with headaches and inconveniences. And what the hell was with a lack of pre-orders (maybe they were hesitant about pre-orders after the botched Nexus 7 launch)? In your totally-justified rage, though, just keep in mind: it's going to get better. A lot better. This isn't the end, it's the beginning.

Ever since Duarte took over the look and feel of the Android experience, and Larry Page began the streamlining initiative within Google, the transformations have been astounding. The expectations for the company have changed. We no longer expect that the first run of products are going to be beta. Remember when Google Now came out? How no one said "It's a really rough product and doesn't work well, but it has a lot of potential and people might like it in a year or two?" Yeah. That's the new Google. What you're feeling right now are leftovers and a stretching company.

Of course, I can say this because I don't have an order waiting in the wings. I'm sure that once I put down my credit card for the Nexus 10, if I get a "please wait three weeks for delivery" email, I'll be rabble-rabble-ing right there with you guys. So, save me a spot?

Lost In The Crowd: Echofon Review