Since its announcement, many internet comments (and tech bloggers, frankly) have lambasted the 2020mAh battery inside the DROID DNA as obviously being too small. A 5", 1080p display, quad-core processor, and LTE - with a 2020mAh battery? HTC must be nuts. Well, it turns out, they actually aren't nuts and actually do know how to make a phone that doesn't die after half a day off the charging cable teat. Surprising, I know. And despite what you may be hearing elsewhere (I won't name names), my experience with the DNA's longevity has been quite positive. I got a lot of requests for an in-depth look at battery life on the DNA when I posted my initial impressions, so here's what I came up with. 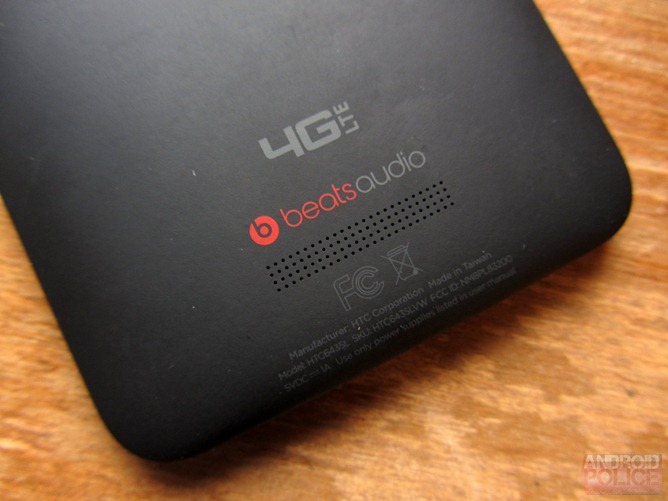 So, how do I "test" the battery life of a phone I'm reviewing? It's a combination of many factors, really. Multiple days of experience, different work flows, how long I'm away from my desk, etc. It's hard to objectively just nail down battery life: the number. And tests that attempt to do so ignore a lot of things that affect real-world performance.

First, I disconnect myself from my everyday phone as much as possible. Granted, this is a Verizon phone, and I'm an AT&T customer, so that's a little harder. When I'm at my desk, or gone for less than a couple hours, I'm using the review phone 100% of the time. If I'm gone longer than that, my own phone comes with me, too, though I only use it to answer calls or texts that aren't through Google Voice (which are few). The review phone is my email, Twitter, and random-opening-of-Google-Maps-and-staring machine the entire duration of my review period.

The next question, of course, is how much use does "David's average day with his phone" actually constitute? And that's harder to answer. Let's go to the bullet list - how many accounts do I have synced, and how often am I doing stuff with them?

Now, what about my power configuration?

For this particular evaluation day, I also viewed about 15 minutes of YouTube (it suggested Whitest Kids U Know when I opened the app, how could I not?), ran Pandora for about an hour and a half, and let the phone sit overnight off the charger. Generally, I'm not playing games on my phone or watching tons of videos, so, if that's a big part of your typical smartphone day, I can't comment.

I'm doing a lot of email, checking Twitter, using Google Voice SMS, looking at Google Maps for no apparent reason, updating apps, taking screenshots, randomly running SpeedTest.net, and deciding where I should get dinner on Yelp. I hope that gives you a good idea of my "average day" with my phone. Now, to the numbers!

Granted, this is for one day. There's a reason my review of the DROID DNA isn't up already - I haven't had it long enough to form an opinion on every aspect of the phone. I have, however, had it off the charger since about 7:30AM yesterday, and it's 10:30AM today, and I still have 9% battery remaining. First, let's look at HTC's battery history chart. 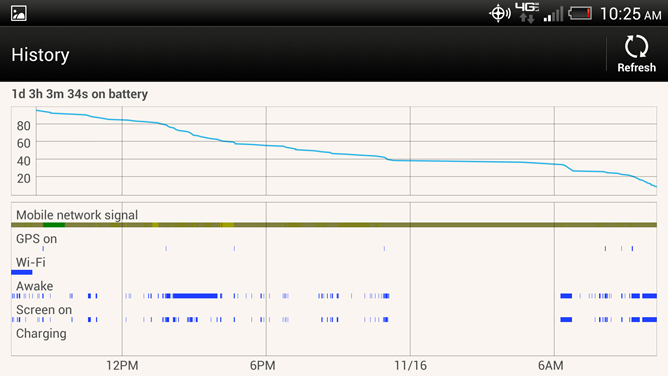 That's 27 hours so far. As you can see, the phone has been awake for pretty big chunks of time, and I've been using it full-bore this morning. If you haven't used Better Battery Stats, get it (here) - this is an amazing app that I've become absolutely reliant on for judging battery life in my reviews. It lets me know if something is awry (eg, keeping the phone awake), what my use pattern looks like, and all sorts of neat other stuff. I really do love it. So, let's go to the results there. 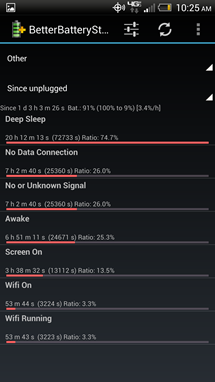 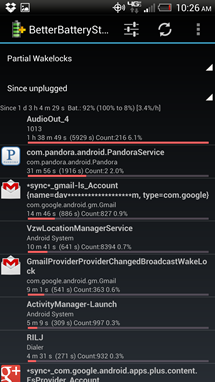 The key stats you want to look at here are "Screen On" and "Awake." Right now, I'm pushing nearly 3.75 hours of screen on time, which is pretty damn impressive for a phone with a 5", 1080p display. In fact, it's actually quite good for any high-end phone. That's coupled with nearly 7 hours of awake time, which is also admirable. This is nowhere near what I'd call "bad." I'd actually call it above average - we're pretty squarely in Galaxy S III / One X territory here - if not slightly better. A big part of this is the S-LCD3 display panel, which is a lot more power-efficient than the S-LCD2 of the One X / X+. It also doesn't get as bright, and colors aren't quite as good - so there are tradeoffs to be had, for sure.

I had Wi-Fi on for an hour, yes, and that was basically for the hour before I left the house yesterday morning. After that, it was off for good. Aside from a short trip into the valley yesterday, I was also in 4G LTE coverage the entire time. LTE gets a bad rap for battery consumption, but that's simply not correct - what makes LTE drink down battery isn't being connected, it's switching between CDMA and LTE. That will absolutely nuke your battery. LTE is actually more efficient than CDMA when you're actively using it - lower latency, quicker speeds, less time with a connection open.

As a final note on my results, you may have noticed in the HTC battery history chart that there's a long dead period overnight. That's actually HTC's intelligent sleep behavior, which automatically turns off sync from 11PM to 7AM (alarms, calls, SMS still work fine), something I really do like about Sense. Either way, even without the sleep behavior, the DNA receives my preliminary "battery life seal of approval." This phone has exceed my expectations, for sure.

What have we learned here? Milliamp hours will never tell the whole story. It's a flawed metric. The DROID DNA seems to have perfectly adequate battery life for moderate users, and even a little more than some other high-end phones may provide. Heavy users, well, there's not a phone on the market that isn't a RAZR MAXX (battery capacity is important - not an end-all) that will please everyone. I just wanted to clear the air of some of the more misguided notions that this phone has "horrible" battery life, when it pretty clearly does not.

If you have any other questions about the DNA, or its battery life, feel free to ask in the comments. I'll do my best to answer.