Update: It looks like the HSPA+ connected Nexus 7 is back in stock at the Play Store, at least for now. Those of you still hoping to get your hands on one would be well advised to claim yours now.

If the newly-released Nexus devices were people, then what we've been seeing is nothing short of that Texas Chainsaw Massacre sequel Cameron can't wait for. Both versions of the Nexus 4 have already dropped like flies, as well as the 32GB Nexus 10. Now, the 3G-connected version of the Nexus 7 is also sold out. Not too shabby. 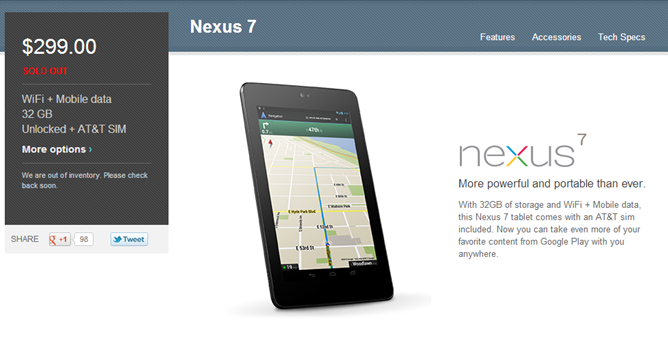 At this point, the only new Nexus product on the Play Store that's still in stock is the 16GB Nexus 10 (as well as both the 16GB and 32GB WiFi Nexus 7s, but those aren't really all that new). Of course, it's impossible to tell what this means for the commercial success of these devices. Is it sheer volume of demand that's causing the shortage, or did Google simply not order that many for sale on its storefront? Either way, it can only be a good sign for Android lovers that these things are a hit with consumers. We'll just be waiting to see how much of a hit. Oh, and we'll also be waiting for them to come back in stock. Refresh. Refresh. Refresh.

HootSuite Updated To Version 2.0 With A UI Redesign And 4.2 Support