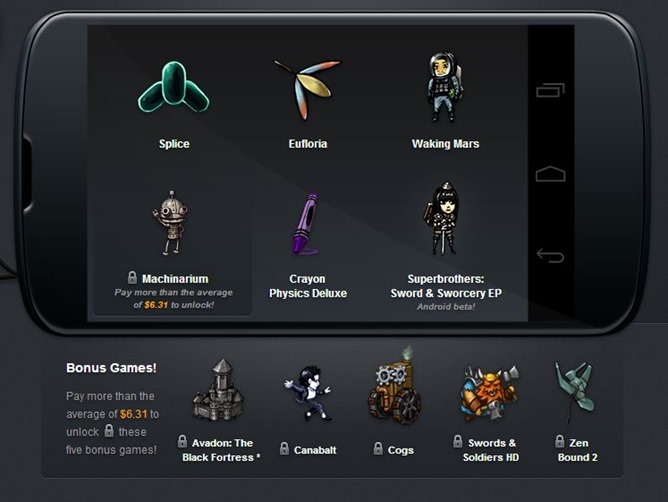 Avadon is an old-school RPG with grid-based combat, currently available for tablets only. Canabalt styles itself as a parkour platformer - think Bit Trip Runner meets League of Evil. Cogs is a 3D puzzler that combines sliding puzzles with physics and construction. Sword & Soldiers follows the 2D beat-em-up vein with added customization and strategy thrown in, and Zen Bound 2 is.... well, I can't really figure out what it is. But I'm sure those of you who are exercising your new rights in Colorado and Washington will appreciate it. All except Avadon include their game soundtracks with purchase.

You know how this goes by now: pay as much or as little as you want, split it up between developers, charities (the EFF and Child's Play) and Humble itself, and download the non-market DRM free APKs. You can also download most of these games for desktops, and even add them to your Steam account. Those of you who have already paid more than the average will get the extra games free of charge. Right now the average payment is sitting at $6.31 - let's see if we can't bump that up, eh?

P.S. You know the Humble Bundle guys are Android nerds - their showpiece graphic has already been updated to the Nexus 4. Pandora For Android Gets An Overhaul To V4.0 - Here's Our Review Of The New App