Update: This upgrade is now live! It will be rolling out over the air starting today. Just be patient. Or repeatedly hit that "Check now" button. Either way.

The Optimus G, LG's powerhouse which serves as the base for the Nexus 4, is going to be released on Sprint on November 11th. At launch, it will receive an OTA to version LS970ZV8, we learned today from internal Sprint documents.

The update will bring the following enhancements and fixes to this quad-core Snapdragon S4 Pro beast:

Pretty minor stuff outside of the freezes and lock-ups as well as resets during YouTube playback - those could turn your hopefully otherwise pleasant experience 180 degrees.

On a more personal note, November 11th is also the pre-eve of the Nexus 4 release, which will mark the week I will be getting the heck off Sprint after being a customer for 13 years. Enough is enough - good deals and unlimited plans just don't justify the terrible service and speeds. I may be back when LTE is fully deployed, but until then - au revoir. 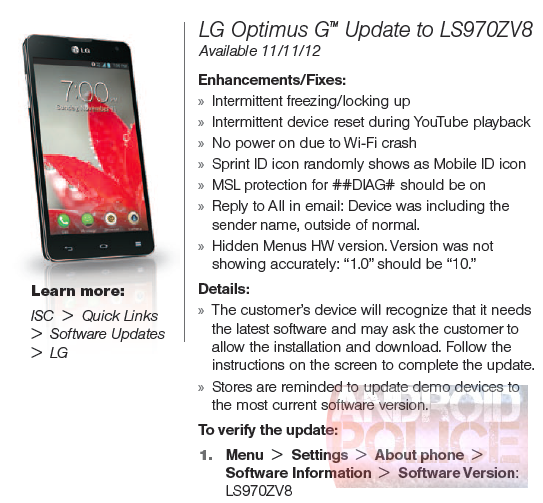 Hands on With The HTC DROID DNA: So Many Pixels!