The much-awaited One X+ and VX for AT&T have finally had their availability dates hammered down - both handsets will be released this Thursday, November 16th. The X+ is HTC's refresh of its flagship One X handset, though aside from some additional memory, the first Tegra 3 processor with LTE, and a spiffy new all-black pain job, it's basically the same phon. Those upgrades are substantial, though, and should make it a serious contender this holiday season. The One X+ ships with Android 4.1 and Sense 4+, while its predecessor is still awaiting an upgrade to the same. 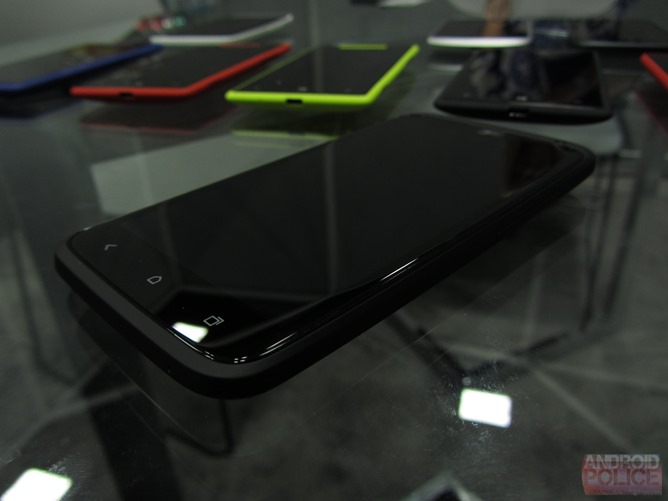 The One VX is HTC's latest midrange handset, and its lineage suggests it's probably related to the One S to some degree, though it lacks the S's aluminum body. It's packing a 4.5" qHD S-LCD2 display (that looks quite good in person), 8GB of storage (with microSD slot), a dual-core Snapdragon S4 processor, LTE, and Android 4.0 (yeah) out of the box. An upgrade to Jelly Bean is planned, though. Check out the full press release, below.

DALLAS, Nov. 12, 2012 /PRNewswire/ -- Customers looking for a smartphone that combines outstanding design, authentic sound, an amazing camera, HD entertainment, and the power of a quad-core processor will surely add the HTC One™ X+ to the top of their wish list.  Available in AT&T* stores and online beginning Nov. 16 for $199.99 with a two-year agreement, customers can also pre-order the HTC One X+ beginning Nov. 13 at www.att.com/onexplus.  A look at the HTC One X+ in action is available in this video.

Additionally, AT&T announced the HTC One™ VX, an affordable Android smartphone that offers a premium mobile experience, will be available in-store Nov. 16 for $49.99 with a two-year agreement.  Running on AT&T's 4G LTE network, the HTC One VX delivers an amazing camera and authentic sound experience in a more compact size for even greater mass-market appeal.

HTC One X+
The HTC One X+ will be the first smartphone to combine Android 4.1 (Jelly Bean) with the 1.7 GHz NVIDIA® Tegra® 3 '4-PLUS-1™' quad-core processor with a battery saving fifth core. The HTC One X+ will also be the first smartphone in the U.S. to feature performance improvements and benefits of HTC Sense 4+.  Continuing with the iconic HTC One X design, this powerhouse now comes in an exclusive Carbon Black finish and adds increased performance, longer battery life and 64 GB of internal storage.

Improved battery life comes from a larger 2100 mAh battery and the smartphone's ability to allow the four cores to operate in the most efficient way possible with each core independently and automatically enabled and disabled based on workload. The single battery-saver fifth core (or companion core) handles low-power tasks like active standby, email, browsing, music and video. Intelligent Power Saver settings further optimize battery life, giving you all the power you need, when you need it.

The HTC One X+ has a 4.7-inch, 720p HD screen and builds on the camera of the HTC One X.  It has a superfast auto-focus and integrates the HTC ImageChip which reduces noise, removes color bias and enhances the overall picture quality.  The 64 GB of internal memory is non-partitioned to store more high quality photos, video, music, movies and apps however the user wants.

The HTC One series set the standard for imaging with HTC VideoPic™ (the ability to take still photos and shoot videos at the same time), one-press Continuous Shooting and better quality images in low light environments.  The HTC One X+ combines the outstanding camera capabilities of its predecessor** with a series of intelligent features powered by HTC Sense 4+. The new Auto Portrait mode on the front camera helps you capture high quality photos by detecting the human face at various angles. Sightseeing mode makes it easier to capture the moment, as only one touch of the power button bypasses the lock screen and launches directly into camera mode. Additionally, two new ways to view photos and videos in the gallery allow you to display albums according to when or where they were taken.

HTC One VX
Exclusive to AT&T, the HTC One VX sports one of the slimmest unibody form factors in the industry at just 9.19 millimeters thin, making it easy to hold and navigate at a size that fits easily in anyone's hand.  The stylish new smartphone comes in a crisp white color finish with silver accents and features a 4.5-inch qHD display protected with scratch-resistant Corning® Gorilla® Glass which aids in durability and reduces light reflection.

Featuring advanced imaging capabilities, the HTC One VX includes a 1080p HD video recorder and 5-megapixel camera with HTC ImageSense™, improving every part of the camera and integrating HTC ImageChip.  Within seconds, customers can launch the camera from the lock screen and enjoy one-press continuous shooting at four frames per second.  The One VX also features HTC VideoPic.  The HTC One VX is NFC-ready for the seamless, wireless sharing of playlists, Web sites, contacts and more with other NFC-enabled devices.

The HTC One VX runs HTC Sense 4 with Android 4.0 (Ice Cream Sandwich). In the future, the original HTC One X and HTC One VX are planned to be upgraded to HTC Sense 4+ with Android 4.1 (Jelly Bean), which will include the improved camera capabilities and new Tap and Go function currently available on the HTC One X+, which allows customers to connect the phone and music to Beats speakers' when tapped them together***.  The HTC One VX comes equipped with a microSD card slot for up to 32 GB of additional storage space.

HTC has the only smartphones, including the HTC One X+, HTC One X and HTC One VX, that include Beats AudioTM which provides authentic, studio-quality sound that delivers the spirit of the original recording, from crisper vocals and deeper bass to more immersive gaming effects and video.

AT&T customers have access to the nation's largest 4G network****, covering 285 million people. AT&T has two 4G networks that work together for customers, LTE and HSPA+ with enhanced backhaul. That means AT&T customers are able to enjoy a widespread, ultra-fast and consistent 4G experience on their compatible device as they move in and out of LTE areas. With other carriers, when you travel outside of their LTE coverage area, you may be on a much slower 3G network.

*AT&T products and services are provided or offered by subsidiaries and affiliates of AT&T Inc. under the AT&T brand and not by AT&T Inc.
**8MP smartphone with an f/2.0 wide aperture lens, backside-illuminated (BSI) sensor, VideoPic, HDR and one-press Continuous Shooting with HTC Sense 4
***Tap and Go only works on selected Beats speakers, which are sold at a separate price to the handset
**** 4G speeds not available everywhere. Limited 4G LTE availability in select markets. LTE is a trademark of ETSI. Learn more at att.com/network.
The names of companies and products mentioned herein may be the trademarks of their respective owners.

Editorial: HTC And Apple Have Settled, And This Is Basically Good For Everyone