So, the MediaPad 7 Lite from Huawei. Maybe you've heard of it. Maybe you haven't. What it is, though, is a "budget" - and I use that term loosely - tablet with a 7-inch form factor. Of course, automatic comparisons to the Nexus 7 are going to be drawn here, and without getting further into the review, I can tell you this: it's not better. It's not as good. In fact, it's not even half the tablet that the Nexus 7 is, and I mean that both in terms of hardware specifications and in actual performance. If you're looking for something more than the N7, keep looking - 'cause this ain't it.

If, however, you have some unreasonable dedication to Huawei (hey, every brand has its fanboys, right?), then read on. 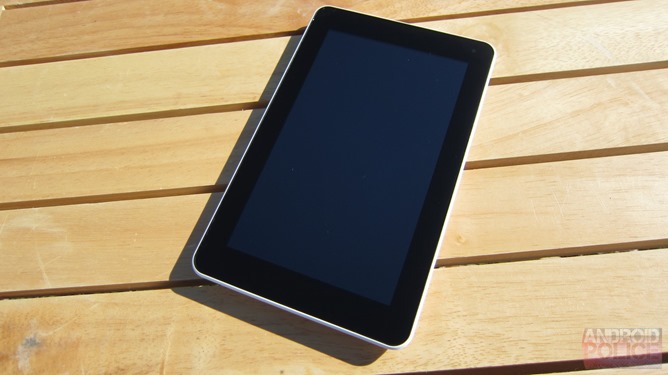 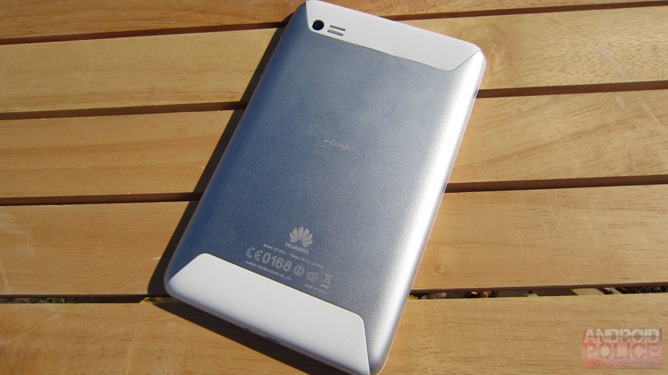 If there's one thing to say about the MediaPad 7 Lite, it's that Huawei knows how to build a solid tablet. From front to back and everything in between, this device is well built and reeks of quality. It's a shame the user experience ruins it, but we'll get to that in a bit.

The first thing you see once the box is cracked open is the back of the device. It's made of a really nice, matte silver aluminum, with smooth plastic caps along the top and bottom (in portrait). The Huawei logo is at the bottom, a "with Google" logo is found in the center, and the 3.2MP rear shooter at the top. Beside the camera is the device's single speaker - a tiny little thing that doesn't put out much sound. The odd thing here is that there's a small piece of raised plastic in the center of the speaker - considering the random hump in the middle of speaker, I thought the plastic was defective. Turns out I was wrong and that's actually a design choice. It can only be assumed it's so the speaker doesn't rest flush against a surface when the device is laid down. Otherwise, this decision makes no sense at all. 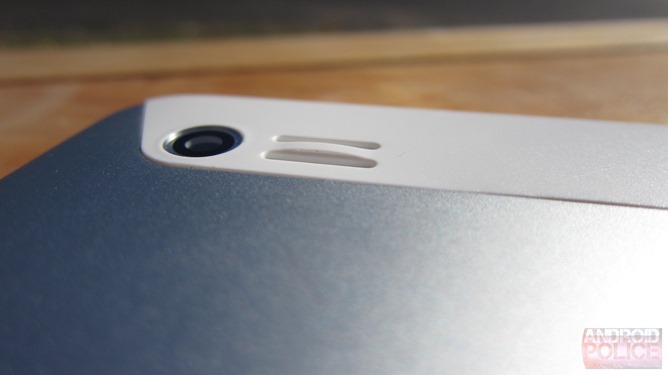 Speaking of questionable design choices, all the markings on the backside of the tablet (as well as most of the press shots) lead you to believe the device will be used in portrait mode - wrong. The rest of the hardware configuration is designed for landscape use. The volume rocker actually gives this away - the leftmost side always turns the volume down, regardless of whether the device is in landscape or portrait. It's very contradictory. And absurd.

Moving past that - and flipping into the landscape orientation - on the top side of the device you'll find the power button and volume rocker, as well as the microSD card slot and SIM card slot, both of which are covered by plastic doors that blend in perfectly with the tablet's aluminum body. So well, in fact, it made me question whether or not the entire back of the device is made of plastic (it's not).

Continuing around the device, the 3.5mm headphone jack and microUSB port are on the right side (or bottom in portrait mode), with the other two sides void of anything. Really, it's very similar to the Nexus 7 in both button and port layout (save for the microSD card and SIM slots).

As I've already said, the build quality here is outstanding. Everything about the MediaPad feels solid and well put together, and the buttons have absolutely zero play in them - it's coated in layers of clean lines and smooth finish. It's a shame that such a beautifully crafted device can has such piss-poor performance. Speaking of...

God, where do I even start? The build and overall look of this tablet are both great. Unfortunately, that's where the good news ends. As soon as you fire this device up, it's all downhill from there.

Take the launcher, for example. Something as simple as swiping through the homescreens should be a fluid, lag-free task, right? Not on the MediaPad Lite. I wouldn't say it's laggy per se, but it's choppy as hell. Even if you don't have pages full of widgets. In fact, it's choppy even if you only have one or two widgets in use. And that just annoys me. If Google can put out a buttery-smooth tablet with 32GB of storage for $250, this kind of performance is unacceptable. There's simply no excuse.

Despite this, I decided to install a couple of games just to see if they were playable, starting with Dead Trigger. As you can probably imagine, that experience didn't go so well. In short, If I left the choice up to the MediaPad Lite, I would be eaten alive long before even having a chance to defend myself. Sadly, The processor in this little guy just can't handle the zombie apocalypse. Or much of anything else for that matter.

Since a super popular game like Dead Trigger was a bust, I decided to fire up YouTube to see how HD video playback was. For this test, I went for one of my favorite videos on YT - this 1080p clip of a Buckethead show from October 2, 2011. Why this video? Because it's high-def, has good audio, and I love Buckethead. The MPL got about two percent into the clip before it started having buffering issues. I'm not sure if the GPU just couldn't keep up with the HD video or the Wi-Fi on the tablet is just terrible - either way, the clip was basically unwatchable. For the record, I watched the entire thing on my Nexus 7 without issue right after I tried to play it on the MP Lite. Again, another bust.

I also stream quite a bit of music from my tablet to a Bluetooth speaker, so I gave the MediaPad Lite a shot in that area, too. The Bluetooth connection was so weak that the music continuously cut out at an annoying rate. I finally gave up and switched back to the Nexus 7. Do I really need to keep going with this? Performance is just bad. In basically all areas.

Just for fun, I ran an AnTuTu benchmark. The results are just plain sad. 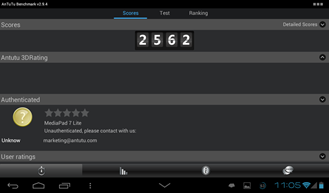 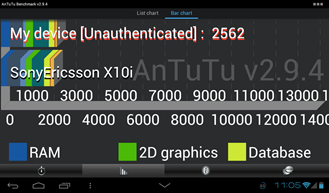 But what about battery life? Here's a shocker: it's bad, too. Possibly even the worst I've ever seen from a tablet (thought it's comparable to the Acer A100, which is equally as awful in the area of battery life). Here's a scenario: the above mentioned Dead Trigger and video test took about 30 minutes. Between that and then sitting idly on my desk while I type these words you're reading right now, it lost 18 percent. Nearly twenty percent gone in a little over an hour with half an hour of use - that's not very good. At all. Don't plan on leaving it overnight, either - this thing consistently lost about 60% while I was sleeping. By comparison, the Nexus 7 loses about 15%, and the Nexus 10 about 7%. Ouch. 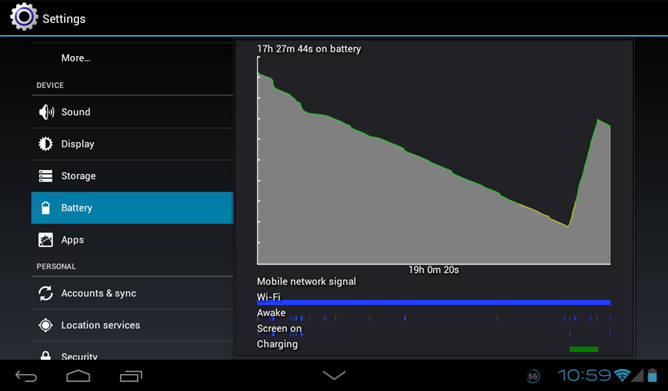 Lastly, let's talk about the software. For the most part, the MediaPad Lite offers a stock Android 4.0 experience, save for one minor tweak that I actually like. On the status bar, there's a small down arrow. Tapping that arrow  hides the bar. To bring it back , simply swipe up from the bottom in the center of the screen. And that's basically it. A neat little feature for watching videos or playing games. Er... well, you know. It's good for... something. 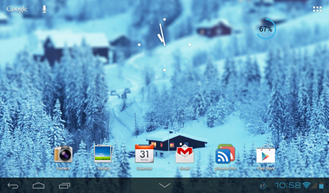 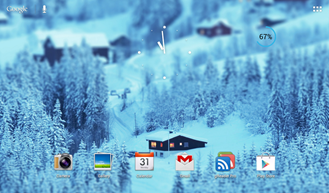 Huawei also threw their own keyboard onto the device, and I have to say, it's one of the worst software keyboards I've ever used. The worst part is the number pad toggle: to bring up the numpad, the toggle is on the right. To go back to the text keypad, the toggle is on the left. This makes so little sense I can't even begin to understand why they designed it this way. I'm just glad there are other options for soft keyboards out there.

I feel like it's worth mentioning that I do like the stock wallpapers, though. They're pretty nice - especially the snowy one shown above. 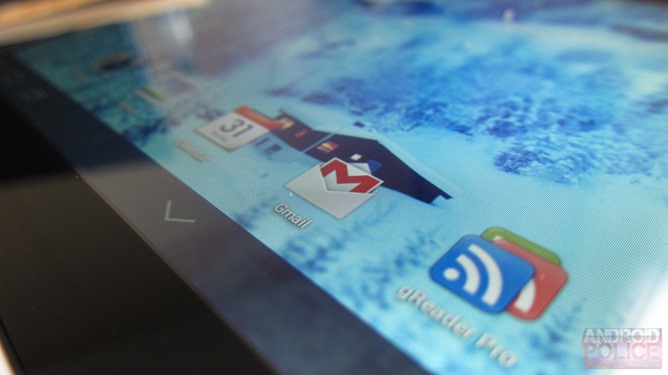 The color reproduction is decent for what it is - basically what you'd expect from IPS. Blacks aren't super dark, but they're acceptable, colors aren't vibrant enough without being oversaturated, thought they do get pretty washed out at higher brightness.

Similarly, viewing angles are decent. I wouldn't say there's anything groundbreaking here, but it's not the bottom of the barrel. Maybe three-fourths of the way down, but not absolute bottom.

The worst part of the display is definitely its crap-tastic 1024x600 resolution. If you don't want to see pixels - and I know many of you don't - then you will despise the screen on the MP Lite. Images aren't sharp, text is blocky, and, well, everything just kind of looks bleh. It didn't help that I had to focus on this screen after seeing the beautiful 2560x1600 panel on the Nexus 10, buy hey - that's today's standard. This one's the standard from three years ago.

In a nutshell, this display is very meh. And that's being optimistic.

The MediaPad's 3.2MP rear shooter is, well, a 3.2MP camera. The photos really aren't that bad, though they're a little washed out indoors. Outdoors, most bright colors are oversaturated, but that's basically expected on a tablet camera. I guess it could work if in a pinch if the MP7L is the only device on you at the time, but I'm not sure that's even a feasible scenario to begin with. 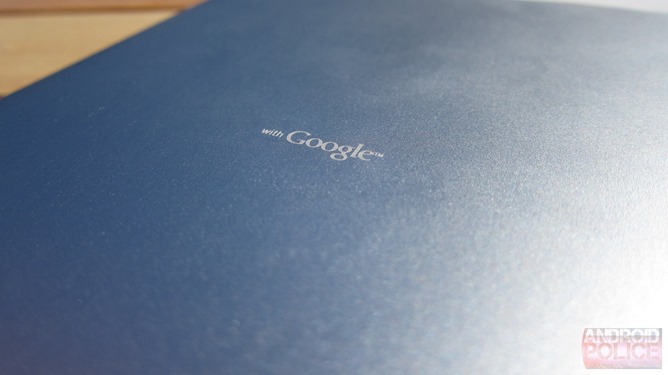 It's painfully obvious that the MediaPad 7 Lite isn't a good tablet. The experience is beyond lackluster, the display is dated, and performance is just all around bad. The only redeeming quality the MP7L has is its build quality, which I commend. It's a beautiful tablet - it's such a shame that it sucks in all other areas.

Despite the fact that pricing nor availability have been announced yet, there really is no reason to even think about buying this tablet. For $299, you can get the best 7" Android slate on the market - the Nexus 7 -complete with 32GB of storage and HSPA+ connectivity if that's something you require from a tablet. Drop the mobile 'net, and the same tablet is only $250. Even if the MediaPad Lite were just $150 - which is highly unlikely - it can't begin to compete with the Nexus 7 dollar for dollar.

So, save yourself the trouble, and just bypass this device altogether. It's not worth your money, no matter which way you slice it.