We knew this would happen. As soon as Google discontinued the 8GB version of the Nexus 7 and dropped the price of the 16 to $199, there were slew of comments along the lines of "now I'll just wait for the 8GB closeout sales." Well, Staples is the first to step up to the plate with that. 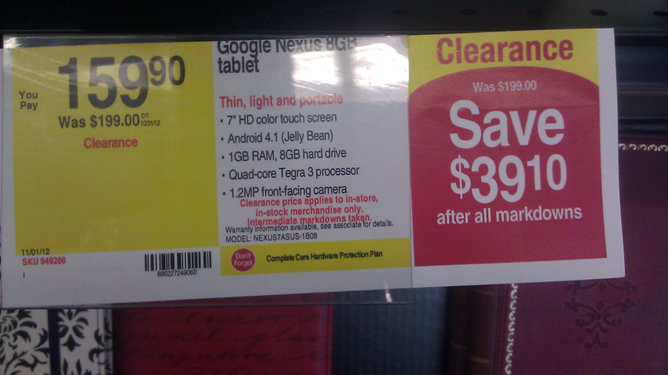 Presumably until they're sold out, you can walk into a Staples retail location and get an 8GB Nexus 7 for just $160. That's about $40 less than what they were going for in the Play Store just a few short weeks ago. Think about it - that's a solid, top-of-the-line Android tablet. For $160! That's quite the savings. Sure, it's limited on storage, but for the price, it's hard to beat.

Unfortunately, it doesn't look like this deal is available online, so you'll actually have to get in your car and go somewhere to score one. Bummer.

[Weekend Poll] HTC And Apple Have Called A Truce - Are The Patent Wars Winding Down?